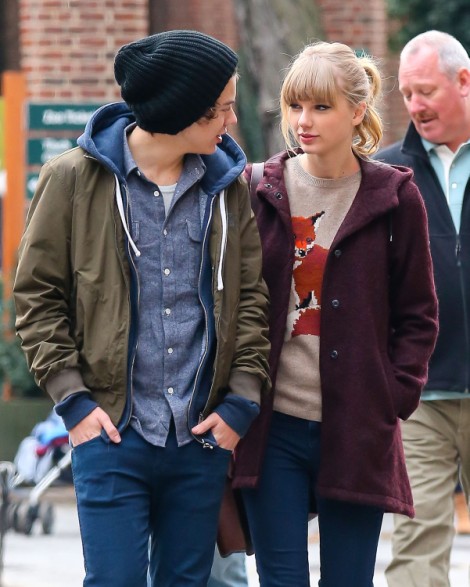 Before Taylor Swift Yoko Ono’ed all over One Direction this weekend by stealing its main man on her private plane to London, she gave Harry Styles and fans a sign that this relationship is no rebound. They kissed! And it’s on camera! And it’s very, very underwhelming.

One Direction and Taylor Swift performed at the Z100 Jingle Bell Ball in New York on Friday and Taylor and Harry can be seen hanging behind stage enjoying the show before she’s set to sing. Check out the video below courtesy of Lainey Gossip. Before Taylor leaves to go on stage she grabs Harry in for a chaste kiss on the cheek. Sorry, no tongue. No passionate eye locking and no inappropriate hand positions. It was a peck on the cheek and slightly awkward. But that didn’t appear to bother Harry. After Taylor left he got frisky and danced with an older guy who some think could be Taylor’s manager but don’t quote me on that. I couldn’t help but smile when I saw it. It was kinda cute.

But… are you disappointed? Did you expect a little more? I’m not going to lie, I did, but I’m not sure why since it’s not like Taylor’s some video vixen or anything. She likes long walks in the rain around London, kittens and floppy haired boys. She wasn’t going to get overcome by the situation and shove her tongue down his throat  for all to gawk at. That’s so Demi Lovato! Besides, that’s what the sleepovers are for. There’s always a time and a place for Taylor Swift. First instance, young love should be enjoyed over cobblestone streets and golden sunsets – not backstage where it’s too loud to hear sweet nothings.

Still, yet again, I expected a little more from Harry Styles. Isn’t he supposed to be a cougar-lovin’ playboy? Looked a little whipped to me. How does she do this?

What do you think of the Taylor Swift Kisses Harry Styles video? Is it new, awkward teenage love or are the couple not as tight as they want everyone to believe?