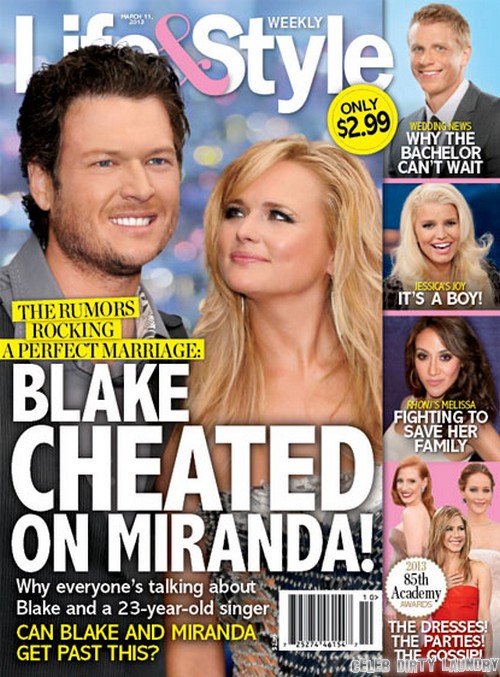 Country singer and judge on The Voice, Blake Shelton has been married to fellow country singer Miranda Lambert since May 14, 2011. Apparently there some problems that have since cropped up in their marriage which have caused Blake to stray. Who knew?!? He seemed like a gentleman to us. When he proposed to Miranda in the first place, he asked for her father’s permission first.

On the other hand, too, though — he was still married to his first wife Kaynette Gern when he met Miranda, so that might mean something, as well. Perhaps he doesn’t really like waiting in between the breakdown of his relationships before moving on to his next victim?

Blake and Miranda are featured on the latest cover of Life & Style magazine and the tabloid is reporting that Blake has been skeeving around behind her back. What a douchebag if the rumors are true! They seemed like such a happy and sweet couple together. The magazine reports that there has been talk of Blake and some 23-year-old singer?!? Let’s hope that Blake and Miranda can get past this drama for the sake of their marriage! Can they last?