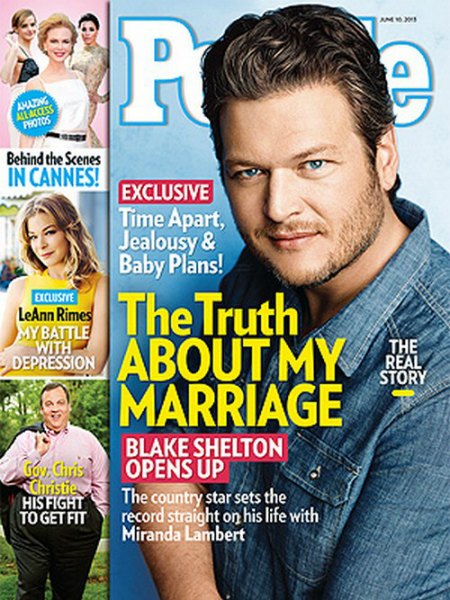 Country singer and The Voice mentor Blake Shelton appears on the cover of the latest issue of People magazine. Inside, he discusses all of the rumors that have been floating around about his marriage to fellow country singer Miranda Lambert.

The rumors have suggested that Blake has been messing around on Miranda behind her back. Blake wants his fans and the public to know, once and for all, that the rumors are just that: rumors. He spoke out on the rumors of marriage troubles to the tabloid and basically said that he gives his wife free access to anything she wants — if she wants to check up on him.

With regard to all of the gossip floating around he said, “I tell Miranda, ‘I have nothing to hide from you.'”

To ease her mind with all of the rumors, he said that he allows her access to his cell phone and computer so that she can check everything herself. He said, “That’s always been our policy: ‘Here’s my phone. Go through it.'”

He added, “That’s really the kind of trust we have. There are no secrets. ‘Go dig through my drawers or my computer if you feel like you need to.’ And that’s been a really good thing, because I don’t want her to ever have any doubts.”

Do you think it’s a good idea for them to give each other that kind of access? Hit the comments and let us know your thoughts!