Blake Shelton and Miranda Lambert’s $100 Million Divorce, Plus the Fight that Ended Everything! (PHOTO) 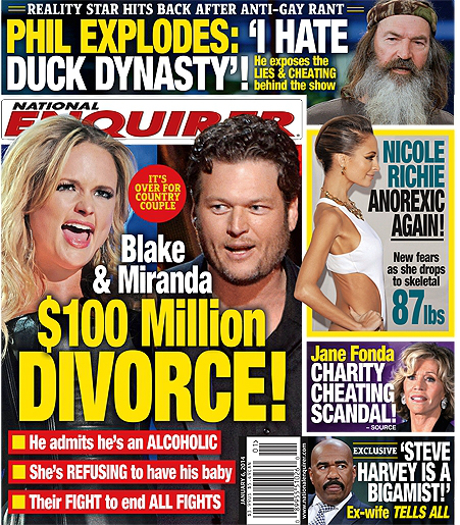 We have been hearing for months now that Blake Shelton and Miranda Lambert‘s marriage is on the rocks and it seems like instead of uniting for the holiday season these two have gotten even more volatile. Blake hasn’t ever tried to hide the fact that he really likes to have a good time. In the last year he has proudly drank like a fish and packed on the pounds to prove it. His fidelity to Miranda has often been questioned as Blake always seems to have a younger, hotter blonde nearby. The fact that the couple is rarely together hasn’t helped anything either.

According to the Jan. 6th print edition of National Enquirer, Blake and Miranda recently had the mother of all blowouts. He finally is admitting to being an alcoholic with no real intention of sobering up and, in turn, Miranda is refusing to even consider starting a family. I’m sure it also doesn’t help that Blake has found himself being blamed for another couples’ rocky road.

Kelly Clarkson has responded to the rumors that her new husband, Brandon Blackstock, has been cheating by placing some of the blame onto Blake. Brandon manages his career and Kelly thinks that if Blake was a better example then her own husband wouldn’t be so tempted to stray. So Blake is feeling the wrath of two women right now and his future with Miranda is looking unclear.

Have you been following all of the Duck Dynasty drama that Phil Robertson‘s remarks started? Well he is standing by his beliefs and it seems that Phil is also ready to dish some of the behind the scenes dirt on the show that has made him a household name. Also taking some heat is Steve Harvey, whose ex-wife has been making some lofty allegations against him. You can catch up on the latest and decide for yourself whether or not you believe that Steve is a bigamist, among other things, in the latest issue of National Enquirer. In the meantime, do you think that Miranda and Blake’s marriage will survive?