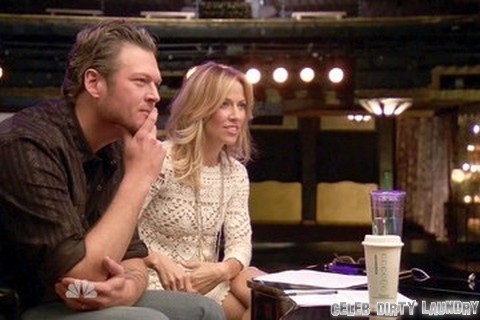 I know that Blake Shelton is clearly no angel. He seems to have a really hard time setting boundaries with woman and that has caused nothing but problems for him in his marriage to Miranda Lambert. He’s not exactly the kind of guy that you would trust so I completely understand Miranda’s constant fears about the possibility of him cheating. But at this point, she knew what she was getting when she married him and it was a calculated risk so she should expect problems.

The latest issue revolves around Sheryl Crow, who Blake brought in as his guest celebrity mentor on The Voice. According to Star Sheryl has been calling and texting Blake a lot and Miranda is pissed off about their connection. Here’s the irony though, he originally wanted Miranda to be the guest mentor but she declined because of her touring schedule. The Voice HAD to choose someone else and Miranda hates their choice. According to the source this topic has already caused numerous fights between the couple and the marriage is in really rough shape.

Let’s be serious here, they only spend two or three months together each year total. Perhaps if they made the marriage a priority than others would be less appealing and there would be fewer fights. It’s like they’ve set themselves up to fail as a couple because they don’t spend enough time together. Then when you add in Blake’s wandering eye – well, major issues develop! Do you think they’re going to make it or is this a couple beating a dead horse on the way to divorce? Is Sheryl even a real issue or just proof of another problem! Tell us your thoughts in the comments below!