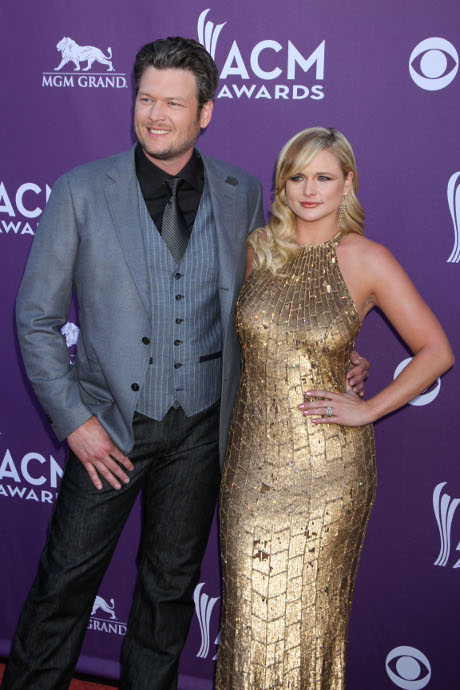 Remember back when everyone thought that Miranda Lambert and Blake Shelton were the cutest, most meant to be country couple ever? Yeah, that didn’t last long now did it? We’ve heard bunches about Blake’s wandering eye and the fake that his potential for cheating gets pretty high when he throws back a few drinks (which is pretty much everyday)

Ironically, it’s not Blake’s behavior that originally postponed their wedding! According to the June 10th print edition of Life & Style magazine, four months into the couples’ engagement Miranda was out on her Revolution tour and couldn’t keep her hands off of her married opening act, Eric Church. Her behavior was so touchy-feely bad that on a few occasions Eric actually insisted that she leave his tour bus. When Blake caught wind of the situation and Miranda’s overt behavior he insisted they not send out the wedding invitations as planned.

Why are these two even together? I mean it’s not like either of them is exactly devoted and they are rarely even in the same place at the same time. Why on earth did they get married in the first place. Let alone survive two years of wedded misery? Blake brags about how honest he is and he says Miranda checks his phone and everything else. If she really trusted him it wouldn’t even occur to do those things! How much longer until the wheels totally fall off of this relationship? Tell us your thoughts in the comments below!