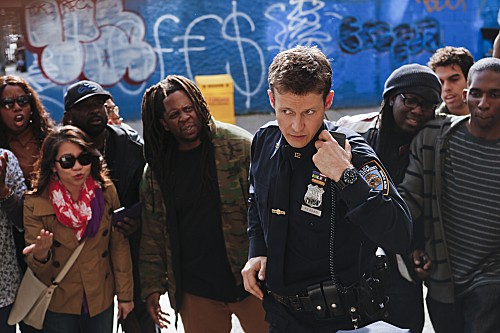 Tonight on CBS Blue Bloods continues with a new episode called, “Drawing Dead.” On tonight’s episode Aida Turturro guest stars as an angry local woman who detests the police and attorney Bruce Cutler guest stars as himself.  Did you watch last week’s episode?  We did and we have a full review right here for you.

On last week’s episode When a gangbanger dies after Jamie chases him away from the boy he is mentoring, Jamie’s conduct is called into question. Meanwhile, Baez goes undercover to get information on Danny’s ex-girlfriend’s fiancée who is dealing drugs from his gym. Charisma Carpenter guest stars as Danny’s ex-girlfriend.

On tonight’s show when an officer is accused of using excessive force on a suspect, Frank finds his department under scrutiny from the community and the mayor. Meanwhile, Danny and Baez investigate the murder of a Wall Street securities trader who was deep in debt due to a gambling addition. Aida Turturro guest stars as an angry local woman who detests the police and attorney Bruce Cutler guest stars as himself.

Blue Bloods “Drawing Dead airs tonight at 10:00pm ET and we will be live blogging all the details. So don’t forget to come back and refresh your screen often for live updates. While you wait for the show – check out the sneak peek video of tonight’s episode below and let us know what you think of the season 4, so far!

Jamie and Jenko were out on patrol when they heard a call for back up over their intercom. They was a shootout in progress. They held their ground while the first officer on the scene chases down another possible suspect. Jamie and Jenko were able to subdue the shooter they had when they heard the sound of gunshots. Jamie left Jenko to secure the area while he went to go find out if it was one of their own down. What he found was that the suspect was dead. A 14 year old kid. The officer said the kid had a gun but the crow growing around claim there never was a gun.

It’s a PR nightmare. The commissioner’s office has to go on the defensive till they find the gun. If they don’t they no one can save the officer from a very public trial. Starting with appeasing the mayor. Frank doesn’t want to a press conference. He knows it would scre the officer before anything had been proven. But he couldn’t say no and even though the mayor promised they wouldn’t hang anyone out to dry that is exactly what he did.

Erin has to represent the case. She believes the officer when he said he wouldn’t have killed a kid unless he was sure he was in absolute danger. The gun is still missing but Erin’s friends helped her out. They unsealed the kid juvie records. The one that says he was picked up on gun charges when he was 12. It isn’t much but it is a start.

In the meantime Danny and Baez have their own to investigate. A very wealthy man was found murdered in his apartment. However nothing was taken despite the wealth still on the scene and in clear sight. This man was killed by a professional. The victim, Teddy, wasn’t as wealthy as his appearance originally hinted at. He needed cash infusion for his company. Yet he was turned down by someone who claimed to be a friend.

Teddy was in heavy with Russian mafia connected gambling debt. He owed more than seven figures. And the guy that set up the poker game was the very same friend that turned down a loan to Teddy. Apparently he gets a cut of the profits when he brings in big players. One of them must have been Teddy.

Demeri has been doing this for a while. He’s has people from the highest positions and the billionaires that put them in that position at his gambling den. For insurance he made sure to create a book listing names and the smallest detail for such a day like Danny coming in to bust up one of his games. One of the names on the list is Danny’s grandfather.

When Danny asks him about it the older man said it got boring playing with no one but retired cops. He just wanted to have some fun. Even if it did cost him 15,000. Danny doesn’t reveal this behavior to his father. He hopes his grandfather will stop now that he’s been called out in it.

Frank’s family has him thinking about the shooting. When Erin came out to defend the officer he knew he had to keep investigating the case. It’s why he did it himself. He went to the first witness on the scene. The one that claimed there wasn’t a gun. He pretended he knew everything when in fact he was holding a blank paper. The pressure did crack her. She took the gun from the scene. Whether it was to frame a cop or bring awareness to his neighborhood, she doesn’t say.

Danny sends an old acquaintance in to grab Demeri’s book. Without it they can finally nail Demeri. They learned it wasn’t Demeri that pulled out of a possible partnership. Teddy did. If he gave control of his own company to Demeri, a man he knew was dangerous, he wouldn’t be able to live with it. Danny and Baez go to take Demeri in but they find him dead. He was killed and so too was Danny’s informant.

The cop that was exonerated is taking some leave. Although he can go back to work he shot a kid. He has to learn to live with that.

Henry comes clean with Frank. He admits to being in part of a poker game that was controlled by the mafia. He also states Danny’s involvement. He did it because he wanted to see if still had it in him to beat others. He did. He used the earnings and donated it to charity.
Danny goes to church. He’s having a hard time with his informant’s death on his conscience.