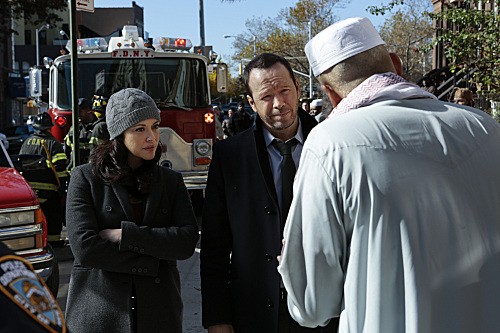 Tonight on CBS Blue Bloods continues after a two week hiatus with a new episode called, “Mistaken Identity.” On tonight’s episode Frank must deal with the political fallout.  Did you watch last week’s episode?  We did and we have a full recap right here for you.

On the last episode before the hiatus Danny and Baez investigated a homicide in which Baez’s estranged brother, a former drug addict, is the lead suspect. Meanwhile, Frank learned one of his most highly decorated officers, a German Shepherd in the K9 unit, was being accused of police brutality, and Henry investigated the widow of a former NYPD pal who might have had a hand in her husband’s death.  Kirk Acevedo guest starred as Baez’s brother, Javi “Tic-Tac” Baez.

On tonight’s episode Danny and Baez investigate a local bombing, but meet with tension and resistance from the community during the investigation. Meanwhile, Frank must deal with the political fallout when a man punches an officer who was overly aggressive in his questioning.

Blue Bloods “Mistaken Identity” airs tonight at 10:00pm ET and we will be live blogging all the details. So don’t forget to come back and refresh your screen often for live updates. While you wait for the show – check out the sneak peek video of tonight’s episode below and let us know what you think of the season 4, so far!

In that past year, one mosque was vandalized at least four times. Someone has peed in the water the worshippers used to clean their hand before prayer. The wall facing Mecca was defaced and two kids were caught trying to steal the Quran right out of the building. The final and frankly the most damaging insult was when someone threw a pipe bomb through the window.

Danny and Baez are on their case when they get a surprising description from an eyewitness. The elderly woman they brought in has claimed she saw a Muslim man bomb the mosque. She can remember it clearly because she couldn’t understand why the bomber would turn on his own people.

With the recent bombing, Frank might have to do some PR quick stepping by attending a dinner with the Citizen’s Defense League. They’re a civil right group but he’s had some dealings with them in the past. The CDL were usually helping everyday citizens file lawsuits against the NYPD for one infraction or another. So it’s safe to say that Frank was happy to finally get the perfect excuse not to sit down with them. Too bad the excuse was another lawsuit. One cop got a bit gun-ho with who assumed to be the bombing suspect except the man he was questioning wasn’t even Muslim. He was actually Sikh. When the officer continued in trying to take him in; the Sikh man punched him. And assaulting a cop is and will always be an offence.

Danny and Baez search to try and find out more information on any possible suspects but the moment word got out a Muslim was a suspect – the community closed ranks. Danny and Baez had to resort to questioning old enemies in order to get someone to listen to them. They go to Mustafa’s. Mustafa was the very same man Danny nearly arrested not long ago for killing his brother’s girlfriend. When he sees him, Mustafa honestly doesn’t know why Danny thought he could get answers from him. If he thought Mustafa was the most willing to speak then he quickly learned he was very much wrong.

Jamie has been getting closer to his partner, Jenko. Possibly too close, by the way Dana felt awkward just being around them. Jamie assures her that there’s nothing between him and Jenko. Partners are simply close but they would never sacrifice doing a good job by letting romantic entanglements ruin things. He wasn’t hurting Dana by implying he never would cross the line just because of work. They do have an established casual thing going. Dana knows that and yet she keeps asking about Jenko no matter what Jamie says.

Well, on the other side, Jenko happens to like Dana. But more pressing, she was surprised she never heard about Dana before now. Jamie discussed his on again/ off again status to explain why the relationship isn’t a big thing but then he says Dana still somehow found a reason to be jealous of her. Jenko found that suggestion funny. Looking at them, there are so many reasons why she and Jamie aren’t each other’s type. Specially, when you bring families into the equation. Jamie’s has a family of cops while her dad is doing six to eight for running a Ponzi scheme. Even if they were an attraction, she doesn’t believe she would ever be good enough for him.

There was a second bombing. That time it was at Mustafa’s place and people were injured in the blast. Danny was quickly on the scene. Personally, he would have never wished for Mustafa to get hurt no matter their history. Mustafa walked away with cuts and bruises while his friend regrettably had to get his legs severed. All in all, the bombing had a disastrous effect and Danny had to promise to catch the guy in order to calm a shaken Mustafa. In return, Mustafa gave him a list of possible suspects.

Eventually though Danny finds a new and very convincing suspect. He found a Muslim man roaming anti-Muslims chat rooms. Zaki is his name and he’s a family man. He has a wife and daughter but he was recently laid off and on top of that he has an ill father. Combined; these things made him question his faith like never before. After talking to his wife, Aaliya, Danny and Baez feels sure Zaki is their guy. However they might have been too late catching him. Zaki took over his dad’s apartment and fitted it out to be his personal bomb factory. From the items lying around, they know where his next target will be but not how he plans to bomb the place. He’d planned on bombing the Muslim Day Parade. It’s a large venue and too much ground to cover.

The police were only too lucky to have caught a break. They brought Zaki in for questioning after spotting him trying to visit his family. At first he was reluctant to talk. He wanted to keep to his stance of “Allah will save those that need saving”. Danny only managed to crack through Zaki’s delusions by bringing his daughter into the interrogation room. It seems no matter who he would have all too gladly killed; Zaki couldn’t remain the bad guy in front of his daughter. He told Danny where he planted the bombs and from there Danny evacuated the parade in time to for the bomb squad to diffuse the bomb. They were hidden in the sound system.

Frank was put in a dilemma. He knew his cop wasn’t in the wrong as well as knowing the Sikh man was basically a good man that felt put upon. In that situation, they both merely lost their tempers. In order to make peace, he got Erin to lessen Dr. Hameed’s charges (not that he will ever make that public) and he scheduled a sit down with the doctor. He made the other man hear how it wasn’t the intent of the cop to add another insult to the doctor’s people. The officer was trying to do his job and might have gotten overly zealous. Afterwards, he introduced them again hoping they could agree to understand that both of their wrongs cancelled out each other.

Dr. Hameed is a proud man, but he knew he should shake the officer’s hand because it was the right thing to do.