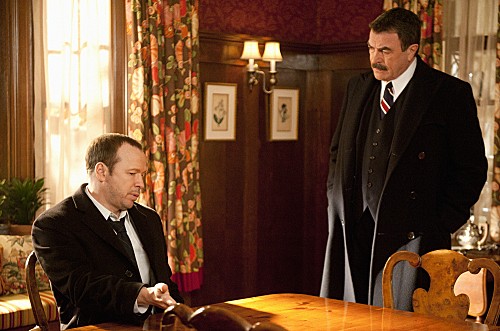 Tonight on CBS BLUE BLOOD returns with a whole new episode called “Front Page News.”  On tonight’s episode Susie Essman (“Curb Your Enthusiasm”) guest stars as Judge Clarice Karl, a no-nonsense judge who presides over Mayor Poole’s trial.  Did you watch last week’s show?  We did and we recapped it here for you!

On the last show  when a radical environmentalist sent a message to motorists, Danny and Kate were put on the case. Meanwhile, a bicycle accident sent Danny’s son Sean to the hospital with a serious injury.

On tonight’s show Jamie must deal with the emotional consequences of his actions on the job. Meanwhile, Erin questions Mayor Poole on the witness stand, on BLUE BLOODS, Friday, Jan. 11 (10:00-11:00 PM, ET/PT) on the CBS Television Network. Susie Essman (“Curb Your Enthusiasm”) guest stars as Judge Clarice Karl, a no-nonsense judge who presides over Mayor Poole’s trial and Annabella Sciorra (“Law and Order: Criminal Intent”) guest stars as a NYPD Psychologist who assesses Jamie.

Blue Bloods “Front Page News” airs tonight at 10:00pm ET and we will be live blogging all the details. So don’t forget to come back and refresh your screen often for live updates. While you wait for the show – check out the sneak peek video of tonight’s episode below and let us know what you think of the season 3, so far!

Recap: The mayor didn’t behave himself in court and Erin is complaining to Frank. Jamie is in the park, there was a 911 call that there is gunman loose and he finds him. The gunman points his gun and Jamie shoots him dead without another thought. He has to head to the hospital, it is protocol when a cop is involved in a shooting. Danny shows up to check on his brother and tells him the shooter gave him no choice.

The victim’s name was Gavin and had no criminal record, the gun was even clean. Frank is in a press conference and questions come up about the shooting early in the day, the victim was a family man and church going as well. A report asks Frank right out why his son shot the guy, why didn’t he use a taser. Frank takes Jamie’s side, not because he is his son, but because he is a cop and was doing his job.

Jamie is at the hospital and denies that it is bothering him at all and just wants to get out of the hospital. Danny gets a call from Linda and she tells him that Jamie is not processing this in a healthy way, he is in denial. Danny assures her that everything is going to be fine and not to worry.

The case is taking a turn, the 911 caller was the victim, he called himself. It looked like he was committing suicide, by a cop.

Jamie goes to visit the victim’s wife and unintentionally makes her very upset.

Erin confronts the mayor and asks him why he doesn’t want to testify, he tells her it is complicated and an election year for him.

Danny is with Jamie in a bar and he tells Danny that he is not fit to be a cop as he thought Gavin was drunk and he has been sober for fifteen years according to his wife. Danny tells him to take some personal time while he does some check around in the meantime.

Danny heads over to the morgue and finds out that Gavin was healthy, except for a broken pinkie finger – his blood alcohol was .07, he was drinking.

Frank calls Jamie in for a talk, he wants to know how he is holding up. Jamie says he is fine, all apart of the job and Frank doesn’t believe him. Frank begins to recount a story when he visited the mother of a victim and it was a mistake, it didn’t help and was more for him than her. Frank tells him straight that it was a mistake that he went to see the victim’s wife without notifying the precinct first. Frank tells him not to carry this alone, it’s a fool’s errant and he is anything but.

Danny heads over to Gavin’s work and tries to get some information about how was at work. It seems that he was at a job fair recently and had a fight, the person he hit had a black eye, his name was Tyler Green. It turns out that Tyler is an old room mate of Gavin at MIT.

Danny finds Tyler and wants to ask questions about Gavin. Tyler claims that he got the black eye from horsing around with Gavin and tells Danny just to let Gavin rest in peace.

Danny is back at the station and Jamie is shocked that he let Tyler go but Danny explains he had no reason to hold him.

Sarge goes to see Jamie and tells him that after a shooting he has to go see a department shrink, now.

Erin is in court, she has the mayor on the stand and the defense lays into him and the judge has to interrupt, she calls a recess. The defense attorney bumps into Erin on the way out of the courthouse and tells her that he is going to file a sanction against her for withholding evidence and she has no idea what he is taking about. The mayor is with Erin, he tells her she has nothing to worry about.

Jamie is with the shrink to let him know what to look for in PTSD, he admits he is having symptoms.

At family dinner everyone starts discussing how Jamie is seeing a department shrink and he looks upset.

Danny and Jamie go to see Tyler, he is high and just when they think he is about to tell them why Gavin did what he did, the guy goes and stabs himself in the stomach.

Danny is with Frank, Tyler is stable but he is unable to talk – he is the key to what happened to Gavin. Frank tells him that he could maybe get the right judge and just maybe get a search warrant.

In court, Erin comes out of court and Ryan plead out, its a win win for the mayor. She tells him that she is very surprised that the defense made the claims that he did and now they magically disappeared, she doesn’t believe it was a coincidence.

Gavin left a suicide note, he couldn’t face prison which Tyler told him he deserved to go because they killed a girl fifteen years ago when they were high. Gavin was driving and dragged her two blocks. Gavin planned the 911 call and causing Jamie to shoot him.