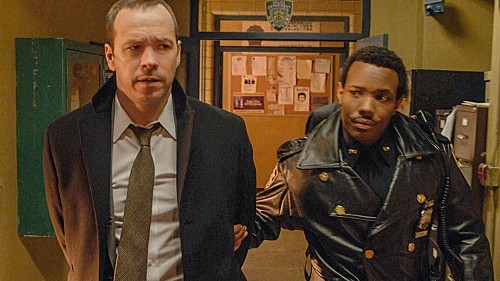 Tonight on CBS BLUE BLOOD returns with a whole new episode called “Framed.”  On tonight’s episode cocaine is found in Danny’s trunk.  The Reagans band together to come to his defense.  Did you watch last week’s show?  We did and we recapped it here for you!

On the last show Jamie had to deal with the emotional consequences of his actions on the job. Meanwhile, Erin questioned Mayor Poole on the witness stand.  Susie Essman (“Curb Your Enthusiasm”) guest starred as Judge Clarice Karl, a no-nonsense judge who presided over Mayor Poole’s trial and Annabella Sciorra (“Law and Order: Criminal Intent”) guest starred as a NYPD Psychologist who assesses Jamie.

On tonight’s show when Danny’s car matches an NYPD description of a vehicle involved in a drug deal, he is stopped and taken into custody when a bag of cocaine is found in his trunk. Meanwhile, the Reagans band together to come to his defense.  Danny tells the police that being broke is not a crime.  But they feel it might be a good reason to commit one and make a man desperate.

Blue Bloods “Framed” airs tonight at 10:00pm ET and we will be live blogging all the details. So don’t forget to come back and refresh your screen often for live updates. While you wait for the show – check out the sneak peek video of tonight’s episode below and let us know what you think of the season 3, so far!

Recap: Danny has to head to the bakery to get the cheesecake for Sunday’s dinner, but fist he is heading to the station and Sarge tells him to start closing some cases. Erin bumps into Danny and reminds him about the cheesecake, he completely forgets and gets there late but he is lucky when the owner who is cleaning up recognizes him and lets him in.

Danny has left the store and gets pulled over by a cop who says that a car matching his was seen in a drug deal. Danny is ticked off, but he gets out of the truck and opens the trunk and there is only a box of junk…..with two bags of cocaine behind it. The cop arrests Danny.

At the station, everyone is shocked to find Danny come in handcuffed. Frank calls Linda and kids over to tell them the news that Danny has been arrested.  Linda is upset, she wants Frank to intervene and she doesn’t understand why it has to be this way. Linda tells everyone to get on this, find out who is framing Danny.

Henry meets up with Erin’s ex and wants him to represent Danny, he agrees, but tells him straight that he and Frank better not get in the middle of it in any way.

Danny is being questioned, he cashed out some of his pension fund and that is becoming an issue now because desperate cops do desperate things.

At court, Erin is surprised to see her ex representing Danny; both rush away and Danny is alone to grab a cab and get home. Linda is really upset, she feels Danny is being treated like a criminal. Another piece of this setup, whoever is setting up Danny also stole his extra gun that he keeps at home in a lock box, Danny finds out when Captain Derek arrives at the house to collect it. Danny and Linda are both upset and the whole mess is causing them to yell at each other.

Garrett did some digging into the case against Danny and there are some inconsistencies – he tells Frank who doesn’t want to get in the middle of this.

Jamie heads to the bakery and questions the owner about Danny being there last Tuesday night, but he insists that Frank hasn’t been there in years. Jamie can’t believe that he is lying and asks him if someone got to him, if someone is threatening him but he continues to deny seeing Danny and throws him out of the bakery.

Danny is going through his old cases and trying to find if it is someone he convicted who is framing in.  All of a sudden, Danny is suspicious when he sees a shadow of someone lurking outside the house. It was just Bert, he was snooping around while walking his dog. It turns out that Bert saw the unmarked police car parked in his driveway on Tuesday when his gun went missing.

Danny meets with Boyle and tells him about what Burt said, Boyle suggests that it may be Kate and Danny refuses to think that his partner would do this.

Danny is in front of the station and he sees Kate talking to Derek and gets suspicious – he asks her to get in the car and the two have a talk. Danny thinks this is all about a black book they were looking for that this guy Greer had. Kate heads over to Greer’s house, he is dead but he has a safe, it doesn’t have the book. The bullets that shot Greer match the ones that were in Danny’s off-duty gun and Erin voices her concerns that this is getting worse. During her conversation with Frank, she tells him that Frank wanted a search warrant a week ago for the black book and went to Saul.

Garrett meets Kate in the park and tells her that what she is looking for could be in her own back yard. It turns out that Derek did the whole thing, Greer was blackmailing him about some gambling debts that were in the little black book and Danny started to get interested in it, he felt forced to get rid of Danny.

Kate tells Danny that she is getting pulled back into Internal Affairs and starts Monday morning., he wishes her well and shakes her hand.

At Sunday dinner, Jamie tells the family that the bakery owner lied right to his face about Danny being in the store. Danny discovers, while talking to his family, that the Reagans actually didn’t sit back and take this whole framing against him lightly.