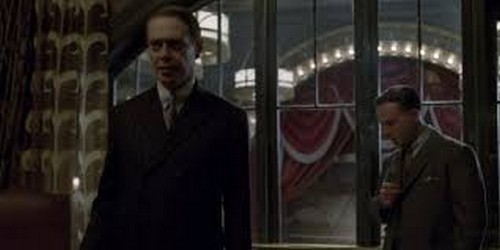 Tonight on HBO, BOARDWALK EMPIRE continues with another new episode called, “William Wilson.”  On tonight’s show as the relationship between Chalky and Daughter Maitland deepens, Valentin Narcisse (Jeffrey Wright) exerts his control over Dunn Purnsley (Erik LaRay Harvey) and the Northside..  Did you see last week’s episode 6?  If you want to catch up before tonight’s show you can read our full and detailed recap right here of last week’s episode 6 right here!

On last week’s episode after a cautious reunion with Margaret in New York City, Nucky headed to Tampa to work out details of his land deal with Bill McCoy and reconnected with Sally Wheet. Richard Harrow returned to Atlantic City and made a confession to an ailing Paul Sagorsky, who encouraged him to get over the past and return to Julia  and Tommy. Having lost J. Edgar Hoover’s confidence, Agent Knox found a new way to gain Eli’s trust. Meyer Lansky decided to go it alone on the Tampa land deal when Lucky Luciano got spooked by Vincenzo Petrucelli, an investor with tied to Joe Masseria in New York. Chalky took out his frustrations on Daughter Maitland.

Tonight’s episode is going to be another action packed one, which you won’t want to miss. So be sure to tune in for our live coverage of HBO’s Boardwalk Empire Season 4 episode 7— tonight at 9PM EST! While you wait for our recap, if you cannot wait for tonight, check out a sneak peek video of tonight’s episode below!

Eli goes to talk to Nucky and he tells him he finds Agent Knox odd.  He shows Nucky the handkerchief that Agent Knox gave him last week with the initials JMT.  It does not feel right with Eli, he asks Nucky to call his boss to verify.

Nucky asks Eli about his black eye.  Eli makes a joke about Sally and how she is a pistol.  They try to get a hold of ?? boss and find out he does not work there anymore.

George Remus in being question as a Federal witness.  Agent Knox asks him about Nucky, and he wants Reemus to confirm that Nucky is a kingpin that runs the city.  Reemus confirms it.  Hoover is not happy with Reemus and threatens to send him to Leavenworth.  They ask Reemus what he knows about Tampa he tells that he knows it is hot.

Hoover is not pleased he feels each time they let Reemus out he gets hot meals and a hotel.  Hoover is hesitant to dedicate more money to looking into Nucky.  Esther Randolph tells Hoover it might be a good idea to get in on the plan because the new Attorney General thinks it is a good idea.

Margaret Shroeder boss wants to know if he tried to put her husband in Anaconda Realty.  Margaret tells her boss that she talked her husband out of it because it was a risk.

Charlie Luciano comes to see Joe Masseria and Charlie tells him he knows that he was in Tampa.  Charlie tells Joe he is not in business with Nucky, he turned the deal down.  He wants to know what he is doing there.  They tell Charlie that Vincenzo Petrucelli is the biggest heroin dealer.  They want him to go back to Tampa and make a deal for Vincenzo Petrucelli to carry their heroin.

Dean O’Banion gets a visit from Johnny Torrio and Johnny tells Dean that Al Capone is grieving.  O’Banion swears it was not him who had Capone’s brother killed.

Gillian is withdrawing from heroin as Roy Philips helps.

At the Onyx Club Gaston Means brought Nucky with information on Agent Knox.  Nucky asks him about the hanky with the initials JMT.  Nucky wants to know about Elliot and where he is gone.

Margaret is called into her bosses office and he introduces her to a man, Abe.  Margaret recognizes him as Arnold Rothestein.  Her boss tells Arnold that her Margaret’s husband bought into Anaconda and she talked him out of it, which resulted in them losing a great deal of money.  Margaret excuses herself for not feeling well.

Doctor Narcisse comes to see Chalky and Chalky tells Narcisse that he wants to extend Daughter’s run.  Narcisse tells him it is impossible.  Chalky asks him to fix it, Narcisses wants to know what he will give him.  Narcisse wants a chapter of the Negro Improvement Centre opened on the North side.  If Chalky does it he will let Daughter stay another month.

Willie Thompson is having trouble at school and he walks out of class.

Margaret’s boss comes to see her and asks what is wrong with her, she apologizes.  He tells her it is okay Abe invested $100,000 and left a $100 tip for her.  Margaret is back at work and Arnold Rothstein calls and tells her he would appreciate she keep his identity private, she agrees.

Johnny Torrio bought a distillery from O’Banion just as he signs the paper the police burst in.  Johnny is suspicious.

Dunn is at a meeting and the people are asking when he is going to fix things they want to know where Chalky is.  The Deacon is upset because two men in the community have died of Heroin overdoes and they want to make sure Chalky knows.  Doctor Narcisse asks to speak – he tells them although he is not from there he knows there is a scourge in the community – heroin and alcohol.  Narcisse tells the crowd that the real scourge is not heroin it is apathy.  Chalky is not doing anything.  Doctor Narcisse tells the crowd with the Deacon he will restore the community to the full potential.

Chalky and Daughter are having sex.  When they are finished Chalky tells her she is not packing her bags just yet, she replies she wishes she was never packing them.  Daughter tells her Narcisse is smart and many people look up to him.  Daughter tells Chalky her mother was a prostitute and she was murdered, she saw it.

Doctor Narcisse found Daughter and has been taking care of her ever since. Daughter feels Narcisse is a decent man but she never slept with him.  She tells Chalky he is her man.

Daughter wants a one year engagement.  Chalky tells her he will see about that he has a partner.  Daughter asks her if it is Nucky and he agree and tells her Nucky is a solid partner.

Andrew Mellow is meeting with the police department.  The Attorney General tells them all President Coolidge made an appointment and the new Director of the Bureau of Investigation is John Edgar Hoover.  He tells them he recently realized that there is a major criminal organization that has been formed by bootleggers.  Agent Knox hearing him gets up and walks out.

Gillian brings Roy some food – he tells her she is spoiling him.  She is smiling and when she asks he tells her it is a secret.  Gillian asks him to tell him one of his.  He agrees and tells her the day after he met Gillian he began divorce proceedings with his wife.  Gillian tells Roy she was smiling because Roy makes her feel something she has not felt in a long time, happiness.

Agent Knox is pissed off because Hoover claimed he came to the realization when it was Agent Knox who sold him on the theory.  Agent Knox (Tolliver) is telling Gaston Means this.  Gaston tells him not to carry hankies with his initials.

Eli is drunk and pissed that Nucky pulled him off his son.  Eli starts to get mean with Nucky telling him he knows nothing about kids.  Eli tells Nucky it is his family.

Johnny Torrio comes in to see Al Capone at the bar.  Capone tells Torrio that O’Banion was let out after one hour and all charges were dropped.  Torrio is pissed he does not think a man his age does not deserve to be in jail.  Capone offers to drive him home.  Torrio refuses but tells Capone there is one thing he wants him to do, “Kill that Irish F**k!”

Nucky comes home and sees Willie on his stairs, he asks him what happened.  Willie tells him he could not stay there that long.  Nucky tells him if he is trying to impress him this is not how.  Nucky tells him to go home he does not want to because Eli is drunk.  Nucky agrees to let him stay at his house but

Daughter is with Doctor Narcisse in her room at the Onyx Club and is praying with him.  She kneels down in front of him and starts taking his shirt off as she prays.  She has a bowl of water and she is cleaning his chest which is burned.  It seems Daughter’s mother was the one who burned him.

Daughter tells Narcisse that Chalky does not seem pleased to answer to Nucky.  Narcisse asks if Chalky is pleased with her, Daughter agrees that Chalky is.

We then find out that Doctor Narcisse is the man who killed Daughter’s mother.  He asks her to sing for him and she goes down to the stage to sing “Someone Loves Me.”  Doctor Narcisse listens with his eyes closed.