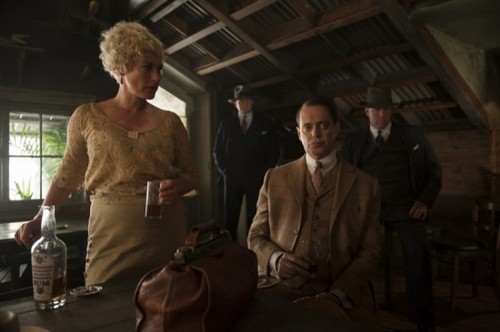 Tonight on HBO, BOARDWALK EMPIRE continues with another new episode called, “The North Star.”  On tonight’s show Meyer Lansky decides to go it alone on the Tampa land deal when Lucky Luciano gets spooked by Vincenzo Petrucelli, an investor with ties to Joe Masseria in New York.  Did you see last week’s episode 5?  If you want to catch up before tonight’s show you can read our full and detailed recap right here of last week’s episode 4 right here!

On last week’s episode Nucky headed to Philadelphia to deal with the fallout from Willie’s liquor fiasco. Eddie Kessler was detained by Agent Knox, who uses physical and psychological tactics to elicit information about Nucky’s organization with a tragic conclusion. A desperate Gillian turned to an unexpected source, Dunn,  to score a fix, and was rebuffed in her attempt to reunite with Tommy. In Cicero, Van Alden was recruited by the Capones to pay an election-day visit to factory workers who are opposed to the Capones’ candidate of choice.  The visit to the factory led to one of the Capones being killer.

On tonight’s show after a cautious reunion with Margaret in New York City, Nucky heads to Tampa to work out details of his land deal with Bill McCoy and reconnects with Sally Wheet. Richard Harrow returns to Atlantic City and makes a confession to an ailing Paul Sagorsky, who encourages him to get over the past and return Julia  and Tommy. Having lost J. Edgar Hoover’s confidence, Agent Knox finds a new way to gain Eli’s trust. Meyer Lansky decides to go it alone on the Tampa land deal when Lucky Luciano gets spooked by Vincenzo Petrucelli, an investor with ties to Joe Masseria in New York. Chalky takes out his frustrations on Daughter Maitland.

Tonight’s episode is going to be another action packed one, which you won’t want to miss. So be sure to tune in for our live coverage of HBO’s Boardwalk Empire Season 4 episode 6— tonight at 9PM EST! While you wait for our recap, if you cannot wait for tonight, check out a sneak peek video of tonight’s episode below!

Tonight’s show opens with Nucky at a restaurant that is over train tracks and his coffee cup is vibrating.  Nucky has been at the restaurant before but this is the first time he has noticed the vibrations from the trains.

Nucky looks up and Margaret is there and she sits down.  She tells Nucky she does not have a lot of time, the subway system is not good.  Nucky asks where she works, but Margaret is being cagey and does not want to tell him.  Nucky tells Margaret that Eddie Kessler is dead.  He gives Margaret a present for Teddy for his birthday.  Nucky thought that Margaret should know that Eddie died.

Margaret tells Nucky she has a good job and the children are doing well.  Margaret is upset she tells Nucky he cannot show up and tells her things.  Margaret is trying to get on with her life.  Margaret gets up and tells him she has to go to work.  She gives him her condolences with a , “I really am sorry no one knew how to take care of you like Mr. Kessler.”

Edgar Hoover is meeting with Agent Knox and tells him his operation is finished.  Edgar does not think that this is where the resources should be put.  Agent Knox begs for one more chance, he wants to find out if Eddie told Nucky about the operation before he died.

Eli and Mickey Doyle are searching Eddie’s room for a safety deposit box key.  The room is small and Mickey makes a sarcastic comment that if he lived in that small room he would kill himself.  Eli sees a picture of Eddie with a boy and is surprised that Eddie had kids.  On Eddie’s bedside table they find a note written in German.

Eli sees a bird cake and opens up the food dish and finds the key.

Back with Chalkie at his club he is watching his son play the piano and Daughter Maitland comes over to see him.  She tells Chalky that she is bored.  She goes over to where his son is playing and asks them to play a song and she starts singing.

Paul Sagorsky is getting a doctor to check him over.  The doctor questions him about his drinking.  Paul has been drinking for 15 years.  The doctor tells him he is going to tell him what can be done and what to prepare for.  As Paul walks out of the doctor’s office he sees Richard.  He yells he needs to talk to him, he slips and falls.  Richard comes over and asks Paul if he is okay, Paul tells him he is dying.

Elie is at the bank pretending to be Eddie Kessler.  The manager comes over and asks what this is all about, Eli tells him that Eddie is dead.  The manager needs a death certificate and legal authorization that Eli is allowed in the box.  The manager is playing hard ball.

Chalky’s is having dinner with the family and his daughter wants her brother to play at her wedding.  Chalky’s wife is not pleased that he took their son to his club.  She feels that it puts ideas in their son’s head.

Paul is drinking with Richard Harrow and tells Paul that he cannot face him or his daughter, Julia.  Paul tells him that they know what he did, he killed the men at Gillian’s house.  Paul calls Richard a hero for saving Tommy. Paul tells Richard he has sclerosis of the liver and he will be gone in one year.

Eli is awake and keeps flopping around – he wakes his wife up and tells her he will sleep downstairs.  Eli tells his wife maybe he should drive up to Philadelphia to see Will.  She is not sure it is a good idea, she thinks Will might think that Eli is prying.  He then asks her if she knows anyone that speaks German.

Bill tells Nucky he is sorry about Eli.  Eli corrects Bill and tells him it was Eddie.  A man, Cal walks up to Bill and asks him about Auggie Tucker.  Bill claims he took off and Nucky asks if there is a problem.  It seems Auggie disappeared after seeing Bill.  They threaten him and in walks Sally with a shotgun.  They leave and then Bill admits that Tucker is gone but he has a new investor.  Nucky agrees to meet him and that is it.  In walks Meyer Lansky and Charlie Luciano.

Agent Knox walks in to see Eli and Michey Doyle he asks if something is wrong.  Agent Knox pretends he is working for them and Eli thinks he is there for money and gives it to him.  Knox asks why they are closed for inventory and Mickey tells him there was a death in the family.

Julie is upstairs and she hears Tommy talking to someone at the door.  She comes down the stairs to see who it is.  It is Richard Harrow.

Nucky is at an Alligator fight with Sally she enjoys it.  Mr. Pierce (Petrocheli) walks in, it is the new partner Bill was talking about.  Nucky introduces Mr. Pierce to Meyer and Charlie.  Nucky tells him he has to think about everything.  When everyone goes to watch the fight, Petrocheli goes over to Charlie he recognizes him and he knows Joe Masseria and Charlie is spooked.

Daughter is singing at Chalky’s club as Chalky watches.

Eli is at Eddie’s apartment and Agent Warren Knox comes in.  Knox gives Eli what he got out of the safety deposit box.  Eli is surprised everything is in the envelope.  Knox asks if he thought Eddie stole the money?  Eli comments why else would Eddie kill himself.  Eli asks Knox if he speaks German, he shows him Eddie’s letter.  Knox reads the letter (of course we know what he is lying about what he is reading)  He tells Eli that it is a letter that Eddie wrote to his son.

Eli starts to confide in Knox about his son, he breaks down and starts crying.  Knox gives him a handkerchief.

Charlie Luciano is really freaked out and does not want Joe to find out he went behind his back.  Petrocheli really made him nervous.  Meyer tells him if it pans out they can do what they want.  Charlie tells him he he already has what he wants.  Charlie wants to back out.  Meyer tells him he is staying in.  Charlie is really upset – he tells Meyer they are partners and he cannot do it – he does not believe Meyer has the money.

Nucky is having a drink with Sally and Nucky jokes on the drink, he tells her it is battery acid.  Nucky asks her what she knows about Vincenzo Petrocheli.  Nucky is not feeling very certain about things.  He tells Sally he is trying to build something and he does not know why.  He musses if he would be happier if he did nothing, but he cannot stop, he gets would up.

Nucky tells Sally he lost someone who was a friend and lived for him and all he can think of is did he know everything about him and if he has something to worry about.

He keeps talking and Sally punches in in the face and he falls.  He tells Sally to stay off the Turpentine.  She hits him again and tells her she cannot stand a whiner.  He tells her he won’t hit her and then he punches her.  They wrestle around and then they start kissing.  Of course then they start having sex and she tells him she will give him something to cry about.

Tommy is on the wharf looking at the start from a spyglass.  Richard wants to know when he became interested in the stars.  Julia tells Richard that Gillian came to Tommy’s school to see him. Julia fills Richard in on what is up with Gillian and that there is a court date next week.

Julia tells him it is difficult because she cannot say much because Richard killed the men at Gillian’s house and she cannot tell anyone.  Julia wants to protect Richard.

Julia does not want to do everything herself but she does not know how she can trust Richard.

Back in Florida Nucky walks in to see Meyer and Bill there and they ask Nucky what happened.  Nucky tells them possums.  Meyer tells Nucky that Charlie is out.  Charlie puts a bag on the table and says it is Charlie, Meyer, Bill and Petrocheli.  Nucky also tells them that Sally is in charge while he is not there.

Meyer gives him condolences for Eddie.

Chalky is in his room and Daughter comes in.  Chalky called for her last night, but she just showed up.  Chalky wonders why she ran out so fast after her performance.  Chalky is not surprised what she said before her performance, she gets up to leave.

Chalky tells her she cannot leave because she is under contract.  Chalky tells her she is to, “fine” for this.  Daughter tells him he knows nothing about her.  She also tells him she saw him watching her last night and she knows what he is.  He grabs her and starts kissing her and having sex right there.