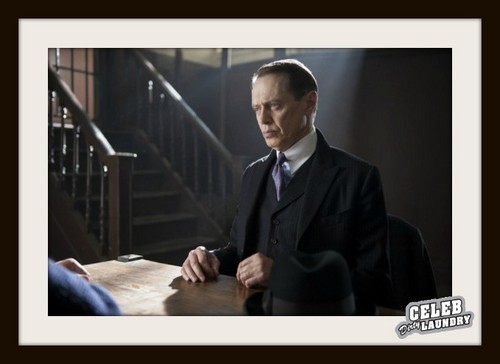 Tonight on HBO, what I consider one of the best television show today BOARDWALK EMPIRE continues with another new episode called, “Erlkonig.”  On tonight’s show the Capones pay an election-day visit to factory workers who are opposed to the Capones’ candidate of choice..   Did you see last week’s episode 4?  If you want to catch up before tonight’s show you can read our full and detailed recap right here of last week’s episode 4 right here!

On last week’s episode Nucky gots to know Arnold Rothstein over a card game and he did not like what he discover.  Nucky also sized up Meyer Lanksky as an unexpected partner for his Tampa land deal.  A newly promoted Eddie Kessler gots detoured after making a train-station delivery. When one of their collectors was incapacitated, Al and Frank Capone decided to finish his route, enlisting a reluctant Van Alden to tag along. Agent Knox fills Hoover in on the Thompson operation, vowing to exploit Nucky’s weakest link which he considers is Eddie.  Dunn Purnsley went to Harlem, and was courted by Valentin Narcisse. Willie and his college roommate, Clayton, carried a practical joke too far.

On tonight’s show Nucky (Steve Buscemi) heads to Philadelphia to deal with the fallout from Willie’s (Ben Rosenfield) liquor fiasco. Eddie Kessler (Anthony Laciura) is detained by Agent Knox (Brian Geraghty), who uses physical and psychological tactics to elicit information about Nucky’s organization. A desperate Gillian (Gretchen Mol) turns to an unexpected source to score a fix, and is rebuffed in her attempt to reunite with Tommy (Brady Noon). In Cicero, Van Alden (Michael Shannon) is recruited by the Capones to pay an election-day visit to factory workers who are opposed to the Capones’ candidate of choice.

Tonight’s episode is going to be another action packed one, which you won’t want to miss. So be sure to tune in for our live coverage of HBO’s Boardwalk Empire Season 4 episode 5— tonight at 9PM EST! While you wait for our recap, if you cannot wait for tonight, check out a sneak peek video of tonight’s episode below!

Willie calls Nucky from Philadelphia – Nucky wonders if something is wrong and Willie tells him he needs help.  Nucky calls for Eddie but there is no answer.  Nucky asks around to see if anyone has see Eddie, but no one has.

Meanwhile Eddie is being questioned by Agent Knox and another agent.  Eddie keeps asking the agents why he is there.  Agent Knox asks Eddie why he has a gun and Eddie says he needs it for Apaches.  Eddie wants to leave but Agent Knox tells Eddie he should stay with them for his own protection.

Nucky shows up at Willie’s school and he is shaken up.  Nucky promises to take care of things, he tells Willie that he has not told his parents.  Willie promises to make things up to Nucky.  Nucky wants to talk about the boy who died.

Gillian Darmody calls Mr. Roy Philips but he is not there.  She continues to use heroin.

Frank Capone and Van Alden come see Al Capone.  He is snorting cocaine and Frank suggests that Al takes a break from it.  Al sees (George) Van Alden is there and is pissed.

Al likes George (Van Alden) because he thinks he has a wild streak.  Frank Capone tells George (Van Alden) to go out and take the 20 best guys and go to the Electric company and help them decided to vote.  Frank checks to make sure Van Alden still has his gun.  Al brings Van Alden some cocaine and tells him to perk himself up.  Van Alden snorts it.

Nucky is questioning Willie about what happened to the  boy, Henry at school.  Nucky asks Willie where he got the liquor and Willie tells Nucky it came from Mickey Doyle.  Nucky is not pleased  because now it means Nucky is responsible because it was his liquor.

Willie is not telling Nucky the truth he is claiming that Henry just drank the same amount as everyone else.  Nucky suggest that Willie claim Henry was his friend and Henry drank a lot and Willie did not bring the liquor.

Gillian is in court speaking to the judge.  She claims she is not sleeping because she is missing Tommy.  Gillian asks what she has to do to get Tommy back.  Gillian asks for a glass of water and she breaks the glass in her hand and cuts herself.

Gillian asks the judge if there is anything she can do to help her situation and put her hands on the judge’s crotch.

The judge asks her to leave the chambers immediately.

Nucky questions Willie about Henry again and then asks Willie who slipped Henry the Mickey Finn.  Willie claims he does not know what Nucky is talking about and then Nucky pushes him to tell the truth.  Willie finally comes clean and tells Nucky that Clayton helped him, it was a gag.

George (Van Alden) and Frank Capone are at Western Electric and Frank tells Van Alden he has to convince the men how to vote.  Frank gives Van Alden a huge bunch of cash and tell shim to stick with him.

Van Alden tells the enforcers that there is no reason it has to get out of hand.  He tells them he is in charge and they are doing it his way.  The men are not pleased.  The men come in and Van Alden asks the men how they are voting and they all tell him to mind his business.  It is Van Alden’s job to convince the men to vote for the Republican ticket.   Van Alden gets into a fight and a mob fight breaks out.

Gillian walks into a barber where all the clientele is black.  She is looking for Dunn and tells him she has made inquiries and that is how she found him.  Dunn wants to know how she found out about him, Gillian tells him she use to be a show person and she keeps her ear to the ground.

Dunn asks to see her money, but Gillian does not have enough.  Gillian offers to give him another form of payment.  Gillian tells him she is having a difficult day and she needs a little extra help.  Dunn pockets the money and he gives her the heroin.

Nucky and Willie are speaking – Nucky promises he won’t tell Eli what happened.  The District Attorney walks in and apologizes.  Nucky tells the DA he wants to get things cleared up before it gets out of hand.  The DA asks Willie what happened.

Julia walks up with two teachers, she asks Gillian what she is doing there.  Tommy asks Tommy to come and Tommy steps back he does not want to go with Gillian.  Julia tells Tommy that they are going to walk away and not look back.  The two teachers take Gillian out.

Clayton asks Willie what they are going to do.  Willie tells him he is busy he has to study and asks Clayton to leave him alone.

Al Capone shows up and asks George (Van Alden) what happened.  Van Alden tells him they were outnumbered.

Al Capone is high on cocaine and although they are outnumbered he threatens everyone.  Another huge fight erupts.    Everyone is fighting and agents come in with guns and start shooting they shoot Frank Capone and he is dead while Al lies on the floor screaming his name.

Gillian is lying on the bed looking at her cut hand.  Roy comes into the room and Gillian asks if something is wrong, did she do something wrong.  Roy throws the kit Gillian uses for her heroin on the bed.  He asks her how it makes her feel.  She claims it makes her feel terrified.  Roy tells her he knows about weakness and sin.  Gillian tells him he does not know her.  Roy tells her if it will make her feel better she can tell him.  Gillian tells him she has done the most awful things.

Back with Eddie and Agent Knox and the other officer – they have Eddie’s job and family history.

Eddie asks Agent Knox what they want from him, he claims he knows nothing.  Agent Knox tells Eddie to tell him one thing and he is free for the day.

Eddie finally tells Agent Knox at the train station he gave the money to Ralph Capone.  Agent Knox asks why and Eddie tells him, “because that is what Nucky told me to do.”

They hand Eddie his cane and he gets up and starts to walk out.  As he walks out Agent Knox tells him he will see him again soon.

George (Van Alden) and Ralph Capone are at the hospital.  Ralph is very upset.  Ralph tells Van Alden that Al Capone wants to speak to him personally.  Van Alden walks into the room and Al Capone is sitting with his dead brother Frank Capone.

Al tells Van Alden that every f*cking thing that crawl is going to pay as he sobs.  van Alden leaves and he kisses his brother sobbing.

Clayton is at school studying and two men walk into the library.  They walk over to Clayton and tell him they are with the Philadelphia police and show him their badge.

Meanwhile Willie is in his room playing his ukulele.  Someone knocks on the door and it is a girl.  He tells her she is not suppose to be there and she tells Willie he better not let anyone see her.  She tells Willie that they arrested Clayton for poisoning Henry.  She asks Willie why someone would do something like that.  She is sobbing and she hugs Willie for comfort.

Eddie is in his room writing and then gets up.

Then he gets himself all dressed up and steps out of the window and kills himself.