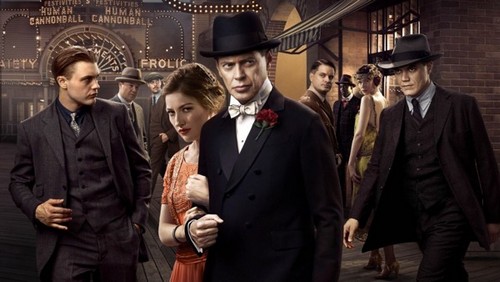 BOARDWALK EMPIRE is racing towards the finale with only three episodes left.  Tonight Boardwalk Empire continues on HBO with another new episode called, “White Horse Pike.”  On tonight’s show Nucky faces a dilemma; Eli makes peace with Willie.  Did you see last week’s episode 9?  If you want to catch up before tonight’s show you can read our full and detailed recap right here of last week’s episode 9 right here!

On last week’s episode Nucky was going to refuse to back Chalky in his conflict with Narcisse. Julia considered her options after Gillian made her custody case in court. In Cicero, Van Alden stood up to Capone, and came clean to O’Banion. Rothstein will look to trade an insurance benefit for a cash infusion.  The episode was written by David Matthews & Jennifer Ames & Steve Turner, and directed by Ed Bianchi.

On tonight’s show Tipped off by Sally Wheet, Nucky is going to enlist Eli and Agent Knox to check out the extra cargo in the Florida shipments. Margaret will ponder a deal with Rothstein to improve her family’s living conditions. Capone is going to grow suspicious of Torrio. Nucky will face a dilemma. Eli is going to make peace with Willie.”  The episode was written by Dave Flebotte, and directed by Jake Paltrow.

Tonight’s episode is going to be another action packed one, which you won’t want to miss. So be sure to tune in for our live coverage of HBO’s Boardwalk Empire Season 4 episode 10— tonight at 9PM EST! While you wait for our recap, if you cannot wait for tonight, check out a sneak peek video of tonight’s episode below!

Tonight’s show opens with Eli drinking a cup of coffee and he is talking to Agent Knox.  Agent Knox wants to know if Johnny Torrio works only with Italiens he wants to know about who works for him.  Warren knows the situation is difficult for Eli and tells him he is a good father.

Sally is on the dock waiting for trucks to get loaded and she tells the men they have to be loaded in 1/2 hour.  She walks towards a shed and hears italien voices she peers in and sees Vincent Petrucelli, Charles Luciano and Meyer Lansky talking and Vincent Petrucelli putting heroin in Nucky’s alcohol.  They men in the shed hear something and go and look around but they don’t find Sally.

Sally calls Nucky and tells him something is wrong. He wants to know what is up, Sally tells him Petrocelli  and his partner are pulling a fast one and stashing heroin in with Nucky’s hootch.  Nucky wants to know if she has told anyone but McCoy.  Nucky tells Sally he owes her one.

Eli comes downstairs in his house and Warren Knox is there with his family.  Eli asks what he is doing there and Knox is pretending he is an Insurance saleman.  Knox tells Eli he needs to go over some documents.  The family leaves and Knox threatens Eli, he realized that Eli is not giving him accurate information about Johnny Torrio.

Arnold Rothstein comes into the office where Margaret Schroeder Thompson is working.  Arnold asks what her salary is.  He calculates her salary and tells her he overheard her calling an apartment to rent and she cannot afford it.  Arnold gives her his card and tells her to call him and he may be able to set her up in more suitable accommodations.  Margaret wants to know what he wants for it and Arnold tells her he wants to know when the stock he bought goes low.  Margaret is afraid she will lose her job, but Arnold tells her she could gain something better.

Over with Chalky he tells his men tha tnight they are paying a visit to the Northside.  Richard Harrow walks buy, Chalky tells his men that he is a dishwasher  that Nucky hired.  His men are not pleased but Chalky tells them he is a friend of his.  He walks up to Richard and tells him if he needs something he should look him up.

Mickey Doyle is talking to Eli about a movie and Nucky asks if he has time to see movies.  Nucky tells Eli to go to Whitehorse Pike and stop the shipment coming into him that has heroin in it.  Nucky wants to make sure what he heard is true.  Nucky tells Eli to take Agent Knox with him.

Johnny Torrio comes in to see Al Capone and Johnny asks who the man sitting with him is.  Al Capone introduces Van Alden to Torrio.  Al tells Torrio he hired Van Alden and Ralph is going to move up in his organization.  Al wants to talk to Torrio about moving up in his organization when he retires.  Torrio tells him he is not retiring and walks out.

Meanwhile Chalky and his men head over to the Negro Association guns blazing and shoot out the window and then men in it.  Chalky thinks he got Doctor Narcisse and he turns his back and walks away and then Narcisse starts shooting and kills his men.  Chalky hops into his waiting car but he has been shot in the shoulder.

Agent Knox and Eli are sitting in the car and Knox is trying to be friendly with Eli as they wait for Nucky’s shipment.

Eli sees the trucks and both him and Agent Knox walk in front of the trucks.  Meyer Lansky gets out and asks Eli what he is doing.  One of the men comes out and tells them they are in a hurry.  Knox takes out a gun and shoots him in the head.  Eli and Knox head to check the trucks.

Meanwhile Richard Harrow is bandaging up Chalky who has been shot in the shoulder, someone knocks on the door it is Daughter.  Daughter wants to know what Narcisse did.  Chalky tells her to go back and make the show so no one knows where she is.  Daughter tells Chalky that Narcisses is going to come after him.  Daughter is worried because Chalky cannot even raise his arm.

In Brooklyn, Margaret can hear the other people in her apartment tenement fighting and yelling.

Nucky is pissed off he has Meyer Lansky on his knees and he is screaming at him for betraying him.  Meyer claims that he got forced into it.  He keeps talking and Nucky slaps him and tells him to tell the truth.  Meyer Lansky tells him there is million of dollars to be made in heroin.  Meyer begs him not to shoot him, he asks Nucky what he would do if he was him.  Nucky tells Meyer to call Masseria to get his ass down there if he ever wants to see his heroin again.  Nucky is told he got a call from Chalky and it is urgent.

Margaret’s boss is talking to her about the stocks and how the are being driven down.

Chalky asks if he is going to help him, Nucky tells him he is there.  Nucky tells Chalky to do nothing till he hears from him.

The Major is speaking on the Northside and assures them all the perpetrators will be brought to justice.

At the Onyx club Joe Masseria walks in and tells Nucky it is a pleasure to see him.  Joe asks Meyer why he is blue and Nucky says it is because of the heroin he shipped in his shipment.  Joe tells him he is going to wait to talk until his partner gets in.  In walks Doctor Narcisse.  Nucky is surprised that Maseria and Narcisse are partners in the heroin business.  Nucky asks what happens if he is not pleased.  Narcisses tells him he can paint him a picture but he won’t.  Narcisse tells Nucky he will require his full support on the Northside by delivering Chalky and that is non negotiable.  Nucky asks what he gets and Doctor Narcisses asks what he wants.  Nucky claims he wants 1/3 of all heroin money past and present.  Narcisses asks if they have struck a bargain and Nucky says yes.  Narcisse shakes his hand.

Nucky calls Mayor Veder and tells him he needs two Sheriff’s deputies to get Chalky White out of town.

Van Alden is with Al Capone, Ralph Capone and they are with girls laughing.  Johnny Torrio walks in and tells them he is leaving.  Al Capone gets a call and the man tells him he called to say goodbye, Al says huh and Van Alden looks up and sees men with Tommy guns he screams get down and he jumps on Al Capone and saves him.  Everyone gets shot.  Al yells to make sure Ralph is okay and he is.  Al says lucky for Johnny Torrio he left when he did.

Chalky and Daughter are sitting on the couch.  Chalky tells her to stay there till morning and then get the train out, she tells him she is staying with him and going where he goes.

The two deputies show up for Chalky and tells him to crouch down in the back.

Willie comes in and tells Nucky that Mayor Veder had a meeting today with Doctor Narcisse and they stayed there a long time.  Nucky freaks out and calls to warn Chalky but it is too late.

Meanwhile in the car with the Deputies Chalky is getting nervous because he thought they were going to Philadelphia and he realizes they are on the wrong road.  Chalky pretends to be sleeing but slowly starts to take his gun out – he knows something is up.  The deputy points his gun in the back and Nucky overpowers him and shoots him.  As the car goes out of control and Daughter tries to steer it Chalky strangles the other deputy.  They stop the car and they throw the dead men out.

Chalky’s son and daughter, Mabel walk into the Onyx club.  Mabel is not pleased but she knows her brother came to play.  As he plays the piano Mabel watches.

Mabel goes upstairs in the Onyx club  and Doctor Narcisse is there.  She apologizes and Narcisse tells her there is no need to apologize – he tells her to sit.  He asks if she is with the musicians.  She tells him no she came with her brother, Narcisse realizes that Mabel is Chalky’s daughter.  Mabel asks if he knows where her father is.  Narcisse tells her he has no idea.  Narcisse comments, she is suppose to be married.  Mabel tells him, that her fiance Samuel broke up with her.  Narcisse takes her hand and starts spouting some crap to her, that she falls for.  She tells Narcisse she came to forget things and he tells her to go and forget.  She gets up to leave.

Eli heads over to Nucky’s house and there is an army of men outside.  Eli asks what is up, he tells him Major Veder has turned and he is on Narcisse’s side.  Willie walks in and Eli asks what he is doing there.  Nucky tells Eli that the reason he put Willie in Veder’s office was to spy.  Eli asks Willie if that is the life he wants and Willie tells him that this is their life.  Eli says okay lets get it fixed up.