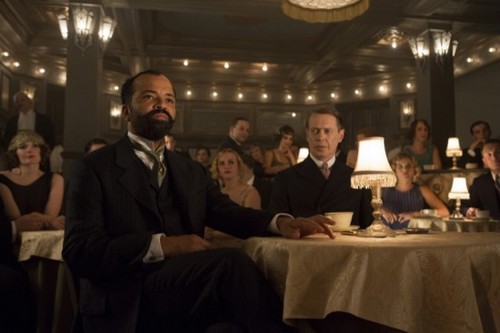 On last week’s episode Nucky’s shipment from Florida will arrive with some unexpected cargo. Eli was going to be backed into a corner when Agent Knox uncovered new dirt on the Thompsons. After talking things over with Nucky, Willie reconsidered his recent life choices. Chalky threw down the gauntlet to Valentin Narcisse, upholding his leadership on the Northside.

On tonight’s show Nucky is going to refuse to back Chalky in his conflict with Narcisse. Julia will consider her options after Gillian makes her custody case in court. In Cicero, Van Alden is going to stand up to Capone, and comes clean to O’Banion. Rothstein will look to trade an insurance benefit for a cash infusion.  The episode was written by David Matthews & Jennifer Ames & Steve Turner, and directed by Ed Bianchi.

Tonight’s episode is going to be another action packed one, which you won’t want to miss. So be sure to tune in for our live coverage of HBO’s Boardwalk Empire Season 4 episode 9— tonight at 9PM EST! While you wait for our recap, if you cannot wait for tonight, check out a sneak peek video of tonight’s episode below!

Tonight’s show opened with Van Alden trying to fix a pipe.  He is having a lot of problems and his wife tells him she needs water to make the cream of wheat while his son wails.

Van Alden tells her to keep the kid quiet.  She tells Van Alden his son is hungry and he tells her to take the water from the bathroom.  She refuses.  He tells her he has to get ready for work.

Over at the Onyx club Daughter is singing.  Upstairs Chalky and Nucky are speaking and Nucky asks Chalky if Dunn could be working alone but Chalky tells him he knows it is Doctor Narcisse behind everything.  Nucky tells Chalky he has to start minding his business and stop minding a voice and an ass.  Nucky does not want to kill Narcisse – but Chalky remarks to Nucky that he helped him when he needed help.

Nucky tries to reason with Chalky and tells him he has a wife and a family and Chalky interrupts and asks Nucky what he is going to do about Narcisse.  Nucky asks Chalky to let him talk to Narcisse.  Chalky agrees to give him a minute.

Val Alden/George is at work and O’Banion is there – O’Banion tells Van Alden he thinks the truck Stew was in had bad Karna.  Van Alden tells him it was unfortunate.  O’Banion goes on and says to Van Alden that Stew got killed the day he disappeared with the Capones.  Van Alden feels O’Banion is accuses him of something but O’Banion says he is not.

On the Boardwalk Gillian is taking the sun and her new boyfriend Roy is there.  She recounts him a story of her first boyfriend.  She goes on to tell him how she met the Commodore and how he ravaged her six weeks before her 13th birthday.  Nine months after that night she gave birth to James.  Roy asks where her son is and Gillian tells him he enlisted and fought bravely in France.  She then tells him when her son came back he struggled and finally overdosed on heroin in her bathtub.

Van Alden comes to see Al Capone and he is being questioned about O’Banion and Van Alden is a bit mouthy.  Finally he tells Al Capone that he wants $1,000 to blow O’Bannion’s head off.  Van Alden tells Al he is the perfect person to do it because O’Bannion thinks he is a coward.

At Chalky’s house his wife is cleaning the silver for the wedding.  His wife asks Chalky if he should tell the Croppers anything about his appearance, because Chalky is not dressed.  His daughter pipes up and says they can tells the Croppers that Chalky was working on a shelf that broke.

Arnold Rothstein’s man, Peter asks him if he wanted the car. Rothstein says no and then asks Peter why he did not gamble and Peter tells him because he does not have the stomach for it.

Eli comes in and Nucky tells him he needs to talk to him.  Nucky tells Eli that there might be a problem with Chalky – he lets Eli know that Chalky killed Dunn and Chalky thinks that Narcisse was behind Dunn coming after him.  Nucky is not pleased that Chalky wants him to kill Narcisse he feels there is a bond with Chalky but Nucky does not bring his problems to Chalky.  Eli tells Nucky his answer to Chalky has to be No.

Eli asks Nucky what else is going on if there is anything he should know.  Nucky looks puzzled at the question and changes the subject and asks how Willie is.

Van Alden is getting dressed and his wife walks in and asks if Van Alden called Sears to fix the pipes.  Van Alden makes a sarcastic remark to her.

Gillian is in court giving her statement as she is speaking Richard Harrow walks in.  She is trying to get custody of her grandson, Tommy again.  Julia speaks to the judge to. Finally the judge says he will give his answer in a month.

Van Alden is at the flower shop and he is getting beat up.  He tells the men to stop he warns then they laugh he takes his gun out and kills all three of them.

Arnold is talking to Nucky he gives him an insurance policy and it is for Mickey Doyle and it seems he is worth 1/2 Million.  Arnold is there and he wants permission to kill Mickey.  Nucky tells him to kill him, he could care less.  Arnold asks Nucky if he wants to buy it.  Nucky asks if he has money problems.  Arnold wants $100,000 for the policy.  Nucky says it is probably the best investment he ever made because he knows one dozen people who would kill Mickey for free.

At Chalky’s wife his wife and daughter are setting the table.  Chalky comes in and he is in a suit and asks his wife if he is presentable.  She tells him he cleans up well.

Doctor Narcisses asks Daughter if Dunn showed up and Daughter claims NO.  He asks her why Chalky did not stay all night.  Daughter tells Narcisses that Chalky was worried about his wife.  Narcisse asks if Daughter had seem him since.  Narcisse then starts claiming that he does not want to involve Daughter.  He complains to her about what he has to do to make his equals look up to him.

Daughter promises to keep Chalky at her place next time.  He reminds her that he vowed to protect her and she would be free to lie down with any man but her heart had to stay with Narcisse.

Narcisse starts to cry and he tells her that Chalky is alive and she has crushed him.  He slaps her.

Van Alden’s wife asks if the men tried to rob him because his face is all cut and swollen.  Van Alden gets pissed at her and starts screaming and someone knocks on the door.  It is Al Capone – they asks what happened.  Van Alden tells him he was attacked by hooligans.  He tells Al to give him till that night.  Al threatens him if he botches it up again.

Meanwhile over at Chalky’s house his son is playing the piano for his family and his sister’s fiance’s family.  Chalky’s daughter Mabel answers the phone and offers to take a message.  Chalky asks who it is and Mabel tells him it is the piano player,  Chalky tells the person on the phone to stay where they are.

Chalky tells his family he has to leave, Chalky suggests that Dunn could take care of it but Chalky says he will be back soon and leaves.

Richard and Julia are waiting to get a marriage license.  Julia ask if he is sure about it.

Chalky comes into Daughter’s room and she is in bed.  He asks to see her, she refuses to take the covers off her head.  Her old face is swollen and bruised.  Chalky asks if the Doctor did it and she says it was the right hand of the Lord.  Chalky asks the man who answered the door if he knows how to tend to her.  He tells Chalky he has been doing it for years.

Doctor Narcisse walks into the Cotten Club adnd sees Nucky, he walks up to Nucky and asks if he can join him.  Nucky asks what he is doing there and he knows he is not suppose to site with him.  Black people are not allowed to site where Nucky is.  Narcisse tells him where he is from blacks can site anywhere.  Chalky jumps in and calls Nacisse out.  Nucky tells Chalky to think about what he is doing because he will start a war and one he will fight alone.

Chalky knocks the table over and leaves.  Narcisse sits there looking smug.

Van Alden/George is sweeping the floor at the florist and O’Bannion walks in.  He asks Van Alden what happened the night Stewie died.  O’Banion asks Van Alden to tell him the truth and puts a gun to his chin and threatens to pop his head like a melon.

In walk three men and they shoot O’Banion to death.  Van Alden walks in sees him dead and steals all the money in the cash.

Nucky comes home and tells his man to get some extra men on his place.  Up the beach walks Richard Harrow.  Richard tells Nucky he got married that day and Nucky tells him congratulations.  He then tells Nucky he needs a job.

Roy is on the phone speaking to someone and tells them it won’t be much longer.  When Gillian walks in he pretends he is talking to a business associate.  Gillian tells him she is fighting the urge for Tommy.  Roy tells her she could lose Tommy.  Gillian tells Roy all she did cannot be for nothing, he tells her it brought her to him and that is not nothing.

Chalky is at Daughter’s place on the couch and she has her head in his lap.  She is really beat up bad.  Daughter tells Chalky that Narcisse sees things they don’t.  Daughter asks him to do nothing to Narcisse and he tells her if he promises her that he breaks a promise to himself.  Someone knocks on the door and it is Mabel.  He tells her that someone had an accident at the club, Mabel walks out.

Nucky calls Sally.  Nucky tells her he just called to talk.  Sally tells him about the weather and that she is sleeping on the porch because it is hot.

Nucky asks Sally what men do in Florida besides Gator fights.  Sally tells him a man can do nothing at all if he wanted.  Nucky asks her if she would put up with a man like that, she tells him she might.  Nucky tells her he might come visit her to check on the business. She tells him business is business.  He tells her he will call her tomorrow, she tells him not to get lost in the fog.

Nucky hangs up and gets up and closes his windows.

Sally is lying on her bed smoking and she has a shotgun on top of her she is holding.