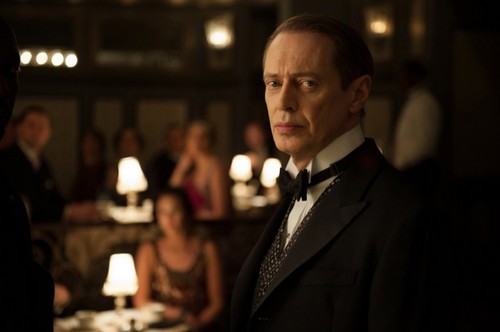 Tonight on HBO what I consider one of the best television show today BOARDWALK EMPIRE returns with it’s season 4 premiere.  This season Nucky’s position as head gangsta status will be questioned by the suave, smart, sophisticated, and dangerously smooth talking king of Harlem, Dr. Narcisse.  Did you see last season’s finale?  If you want to catch up before tonight’s show you can read our full and detailed recap right here of last season’s finale.

On tonight’s show Following his battle with Gyp Rosetti, Nucky makes a peace offering to Joe Masseria (Ivo Nandi) while working the odds with Arnold Rothstein. While Chalky is busy running the Onyx Club on the Boardwalk, the impulsive Dunn Purnsley (Erik LaRay Harvey) clashes with a booking agent.

Tonight’s episode is going to be another action packed one, which you won’t want to miss. So be sure to tune in for our live coverage of HBO’s Boardwalk Empire Season 4 premiere— tonight at 9PM EST! While you wait for our recap, hit the comments and let us know what how happy you are about the season 4 premiere of Boardwalk Empire.

RECAP: The scene opens at a gas station and bar where 2 gentleman are trying to get the attention of the sozing bartender. They ask him to change the radio station and he replies that it’s the only one that they get. They inquire about how far they are from Columbus. The larger gentleman pulls out his wallet to pay and flashes his gun. They’re having trouble starting the vehicle and one gets out to check on what the problem might be. The larger gentleman is waiting for him to get back from checking the engine when he discovers his partner’s throat is cut and Richard Harris is behind him to shoot him in the head. Richard reaches for an envelope inside the man’s jacket from Title Insurance.

Chalky White is observing two tap dancers that Dickie is trying to sell him. Chalky asks for more work from the dancers. They begin harder is Dicky’s wife slips a note into Chalky’s partner’s jacket showing that she wants to have sex with him. Nucky slips on his new coat before going downstairs to meet with Mr. Mozzaria. Nucky wants to be clear with the gentleman in the room to talk with the Thompson brothers. Nucky says he returns what was dropped on his doorstep and hat he doesn’t want every trouble. An argument breaks out as Mr. Mozz asks to see what Nucky has for him. He asks Nucky what he wants. Nucky responds that he wants peace. Mr. Mozz responds that the money provided will end whatever problems they had. Mr. Mozz says they are going home as him and his crew leave together.

Nucky observes the dancers in the club by himself in thought. Gillian is in court fighting for custody of her child. The judge asks for more details about the truth of what transpired in her home that is the focus of the case. Eki Thompson is meeting with a gentleman that works for them with his son in the car. He goes inside to meet with Stand and Warren Knox. Warren leaves the room with another gentleman at their request. Eli is asking Stan what the problem is. Al Capone introduces new women into the brothel. Al is going over a news report on a democratic reform ticket to include alcohol bootlegging and prostitution.

Al’s name is wrong in the newspaper article. Nucky is meeting with Eddie and his girl to talk about a movie. He let’s him leave as he talks with her about him and his establishment. Gillian is trying to get a gentleman to buy something from her but she asks him to wait while she excuses herself for a minute. She goes in her room to shoot up then walks back out to talk price with him. A gentleman is behind his desk trying to make small, pleading talk with an unknown person in the room across from his desk. He goes over the details of his job and tells him that there’s $5,000 in his fate that he can just take. Richard Harrow is holding the gun pointed at him telling him that he’s going to die. He allows him a moment to write down the man’s name that he is looking for and he shoots him in the head.

Nucky is having dinner with Eli and the rest of their family. They’re talking about Eli’s son’s new friends that he’s been hanging out with. Nucky looks at his watch and states that it is time for him to go and then take them for dinner. Will is asking Nucky about working for him, but Nucky tells him that he needs to stay in school and get his degree and that that’s what they’re all counting on.

Al is still talking about the newspaper mis-pelling his name. He is talking about how much he’s worked for and what he currently has and the he deserves his name to be spelled. Chalky’s partner is up with Dicky’s wife in the bedroom drinking. They start to undress and get in the bed together. Nicky shows up in the room as they start to have sex. He pulls out his gun and tells them to sit and tell him what happened. She tells him what she did and he beings to interrupt and Dicky tells him him that his people are always going to act the way that they have been. He puts his gun to his head and makes him call him boss then tells him to go back to having sex with her. Dicky plays with himself as he watches his wife and him having sex. He pulls the bottle off of the table and stabs Dicky with it until he is dead.

Chalky is upstairs looking at Dicky’s body. He brings Eli and Nucky up to see what happened. Chalky tells them who he was and who he worked for. Chalky tells them to din the wife and take care of it… Chalky and Eli have him out dragging the body to bury it. Gillian is getting high as there is man waiting for her.and the begin to talk price. He says his name is Roy. She tried to talk him into staying but he offers to bring her along as his “knowledgable companion” since he is new in town working for Piggly Wiggly and the new branches.

Al Capone is talking to one of the writers at the paper. He writes down a story for him and tells him to read it aloud. It spells out his name so he knows how to spell it. He smacks him on the back of the head and they leave. The Onyx girls come on stage for a show. A dance numbers ensues. Nucky and Chalky are talking about Dicky’s wife before she ran out of the room. Nucky is sitting with his date as she hints at having sex with him. The two cos are getting ready to break into the moonshine warehouse. Mr Hort had a gun booby-trapped to the door and kills the first one. then the new agent shoots him in the head.

Nucky is getting dressed after having sex with his date. She starts to talk about how much she has heard about him and Billy. Nucky is going or a Florida Lan company folder with an old picture when his butler brings him coffee outside on his balcony after making his date leave abruptly. Richard is walking up onto an older looking home out in the middle of nowhere. He pulls his gun out as he looks through the windows.. He places an object in the stack of firewood and knocks on the door. He turns around to see a shotgun in his face from Emma as he tells her he’s come home.