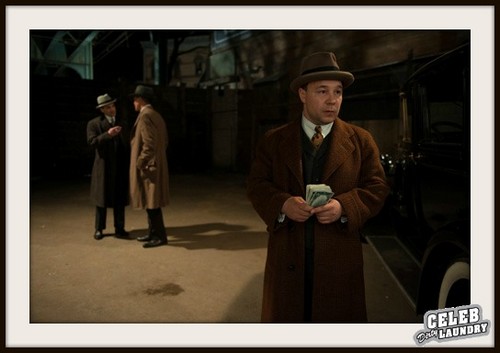 Tonight’s episode of BOARDWALK EMPIRE was a fantastic episode with superb acting as usual.  The ending was emotional and it caught me completely by surprise, I wonder how it will play out next week.  Good news, we have managed to get our hands on a sneak peek video and a few spoilers to whet your appetite as you wait  for next week’s episode 6 “The North Star” .”

On tonight’s episode Nucky headed to Philadelphia to deal with the fallout from Willie’s liquor fiasco where a fellow student Henry died. Eddie Kessler was detained by Agent Knox, who used physical and psychological tactics to elicit information about Nucky’s organization.   A desperate Gillian turned to Dunn to score a fix, and was rebuffed in her attempt to reunite with Tommy. In Cicero, Van Alden was recruited by the Capones to pay an election-day visit to factory workers who are opposed to the Capones’ candidate of choice.  We lost two characters on tonight’s show, one was very emotional and caught me totally by surprise.  Lots happened on episode 5 and if you want to find out we have a full and detailed recap, right here for you.

Spoiler alert: If you’re one of those people who doesn’t like spoilers, stop reading now! We have some juicy spoilers for you about the season 4 episode 6 of HBO’s “Boardwalk Empire”

Official HBO synopsis of next week’s episode: “After a cautious reunion with Margaret (Kelly Macdonald) in New York City, Nucky heads to Tampa to work out details of his land deal with Bill McCoy (Pearce Bunting) and reconnects with Sally Wheet (Patricia Arquette). Richard Harrow (Jack Huston) returns to Atlantic City and makes a confession to an ailing Paul Sagorsky (Mark Borkowsky), who encourages him to get over the past and return Julia (Wrenn Schmidt) and Tommy. Having lost J. Edgar Hoover’s (Eric Ladin) confidence, Agent Knox finds a new way to gain Eli’s (Shea Whigham) trust. Meyer Lansky (Anatol Yusef) decides to go it alone on the Tampa land deal when Lucky Luciano (Vincent Piazza) gets spooked by Vincenzo Petrucelli (Vincenzo Amato), an investor with ties to Joe Masseria (Ivo Nandi) in New York. Chalky (Michael Kenneth Williams) takes out his frustrations on Daughter Maitland (Margot Bingham).”

On next week’s show following the death of Eddie Agent Knox is told that the operation is compromised.  He begs Edgar Hoover for another chance but Hoover is doubtful because Agent Knox’s informant is dead.