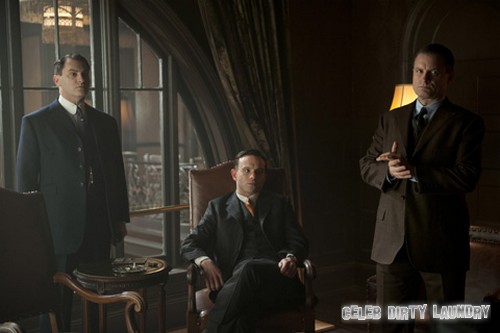 Tonight’s episode of BOARDWALK EMPIRE was fantastic.  We learned that Agent Knox is after Nucky and his organization.  He is determined to infiltrate it by the weakest link, which he considers is Eddie Kessler.  I cannot wait till next week’s episode to see what happens with Eddie.  Good news, we have managed to get our hands on a sneak peek video and a few spoilers to whet your appetite as you wait  for next week’s episode 5 “Erlkönig” .”

On tonight’s episode four Nucky got to know Arnold Rothstein over a card game and he did not like what he found out.  Nucky sized up an unexpected partner, Meyer and Charlie Luciano for his Tampa land deal. A newly promoted Eddie Kessler got detoured after making a train-station delivery. When one of their collectors was incapacitated, Al and Frank Capone decided to finish his route, enlisting a reluctant Van Alden to tag along. Agent Knox filled Hoover in on Nucky’s operation, vowing to exploit Nucky’s weakest link. Chalky was intrigued by Daughter Maitland’s presence. Dunn Purnsley went to Harlem, and was courted by Valentin Narcisse. Willie and his college roommate, Clayton, carried a practical joke too far and someone died.  So much more happened and if you want to find out we have a full and detailed recap, right here for you.

Spoiler alert: If you’re one of those people who doesn’t like spoilers, stop reading now! We have some juicy spoilers for you about the season 4 episode 5 of HBO’s “Boardwalk Empire”

Official HBO synopsis of next week’s episode:  Nucky (Steve Buscemi) heads to Philadelphia to deal with the fallout from Willie’s (Ben Rosenfield) liquor fiasco. Eddie Kessler (Anthony Laciura) is detained by Agent Knox (Brian Geraghty), who uses physical and psychological tactics to elicit information about Nucky’s organization. A desperate Gillian (Gretchen Mol) turns to an unexpected source to score a fix, and is rebuffed in her attempt to reunite with Tommy (Brady Noon). In Cicero, Van Alden (Michael Shannon) is recruited by the Capones to pay an election-day visit to factory workers who are opposed to the Capones’ candidate of choice.

On next week’s show poor Nucky is going to have to clean up the mess Willie caused at College.  Willie and his school friend put something in a classmates alcohol to pay him back for bullying.  Unfortunately, the school mate died from whatever they put in his drink.  Nucky is upset because the liquor came from him and someone has to answer for the death.

Agent Knox tries to convince Eddie Kessler that he is the only one who cares for him as he beats the crap out of him.  Eddie questions that he is his friend.  Will Eddie turn on Nucky?  I doubt it!

Gillian needs a fix of heroin and she goes to Dunn.  Dunn is now dealing heroin for Doctor Valentin Narcisse.  Meanwhile Gillian is still trying to get Tommy back.  Lets hope she does not!  Check out the video below there is so much more!