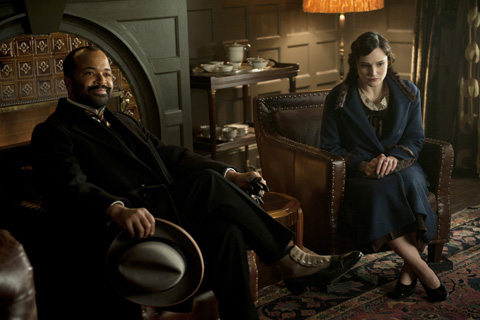 Tonight’s episode of BOARDWALK EMPIRE in my opinion was the best of season 4.  We found out how Nucky is being betrayed double, Chalky is being betray and Torrio is being betrayed.  I cannot wait until next week.  We have a sneak peek video and some insight for you below on what is going on next week episode called, “The Old Ship of Zion” below.

On tonight’s episode Eli confronts Nucky after Willie decided to quit school. Margaret has a surprise encounter at her job on Wall Street with Arnold Rothstein. Joe Masseria orders Lucky Luciano to return to Tampa and deal with Vincenzo Petrucelli and basically double cross Nucky. Gillian goes cold turkey with Roy Phillips’ help. Still seething over his brother’s death, Al Capone  tries to get Johnny Torrio to turn on rival gangster Dean O’Banion. As the relationship between Chalky and Daughter Maitland deepens, Valentin Narcisse exerts his control over Dunn Purnsley and the Northside.  Lots happened on episode 8, many betrayals and if you want to find out we have a full and detailed recap, right here for you.

Spoiler alert: If you’re one of those people who doesn’t like spoilers, stop reading now! We have some juicy spoilers for you about the season 4 episode 8 of HBO’s “Boardwalk Empire”

Official HBO synopsis of next week’s episode: “Nucky’s shipment from Florida will arrive with some unexpected cargo. Eli is going to be backed into a corner when Agent Knox uncovers new dirt on the Thompsons. After talking things over with Nucky, Willie will reconsider his recent life choices. Chalky is going to throw down the gauntlet to Valentin Narcisse, upholding his leadership on the Northside.” The episode was written by Cristine Chambers and Howard Korder, and directed by Tim Van Patten.

On next week’s show the title is from a Christian Hymn written by M. J. Cartwright sometime around 1889.  The song is about a maiden voyage – I wonder if this is referring to Nucky’s first shipment from Florida.

Nucky gets his first shipment of alcohol from Tampa and it includes something else heroin.  Charlie Luciano made a side deal with Vincenzo Petrucelli to carry drugs along with alcohol.  You know Nucky is not going to be pleased by that.