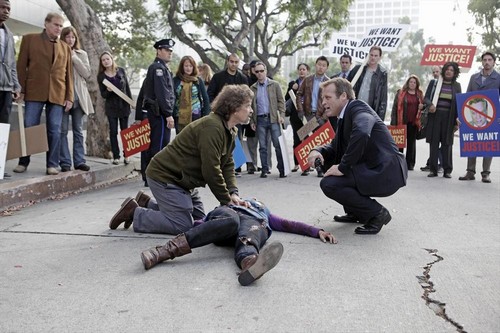 Tonight on ABC BODY OF PROOF returns with a whole new episode called, “Disappearing Act.” On tonight’s show a protestor outside the courthouse is run over and killed by the getaway car, and later a video surfaces of Gerry being killed. Did you watch last week’s episode? We did and we recapped it here for you!

On last week’s show a young girl was found murdered, and when Megan arrived at the scene, she found Tommy covered in blood. As the evidence piled up against him, Tommy claimed he could not remember what happened the previous night. Though Megan had doubts about Tommy’s involvement, she was the only friend he has in this situation and had to put her personal doubt aside to try to prove his innocence.

On tonight’s show a rich investment fund manager, Gerry Roberts, stands trial for defrauding his investors of a billion dollars, but he is kidnapped as he is leaving court, even though Tommy and Adam are on his security detail. In all the chaos, a protestor outside the courthouse is run over and killed by the getaway car, and later a video surfaces of Gerry being killed. But was it possible he faked his own death? Megan also gets closer to the truth about her father.

Tonight’s episode begins with Tommy guarding an investment guy named Roberts  that defrauded people out of billions. As Tommy is trying to get him out of court they are boxed in on a stairwell and it’s gassed. Roberts is kidnapped, a hood is placed over his head and he is shoved into an SUV. A short while later a video turns up of Roberts being executed and now a billion dollars is missing.

While Megan is working on the body of a woman that was hit and killed by the SUV, Tommy suggests that Roberts may have faked his own death. Tommy thinks a snuff film might be his way out- with the money and wonders why his body hasn’t turned up yet. They re-watch the video until they pick up enough background noise to lead them to the closest rail yard. Once there they find a burned out car with Roberts charred watch and a few teeth. It appears to be proof that the video was quite real.

Kate and Megan go to visit with someone from the Chinese consulate because the SUV was actually stolen from them. He claims it was never reported because they handle these things internally. Kate refuses to press because she knows they won’t get anywhere.

Kate goes back to the body and sits staring, thinking. She double checks the dental implants and the supposed fibula they found and realizes that things aren’t adding up. Someone did help him fake his own death after all.  She believes they are looking for someone with a forensic pathology to have helped Roberts.  They start pouring over Roberts visitor list during his months of house arrest and come up with only 54 people that paid him a visit.

They realize the guy who tried to revive Jennifer, the woman hit by Roberts’ SUV at the beginning of the episode is on one of the security videos outside Robert’s apartment door. They pull his DNA off the dead girls lips and as it turns out he’s a forensic pathologist- that supposedly died 5 years ago.

Megan goes to visit his ex wife and she says that her husband was a gambling addict and she has no clue that he is still alive.

They look up the website that he is addicted to and find that he’s going by the name Alec Hamilton and staying in a hotel in San Diego. They go through the room and realize that Alec is running a business that helps people fake their own deaths.  They catch him as he is coming into the room. He seems to think that he does people a service by giving them a second chance at life.

Alec leads them to Roberts who will be headed back to trial. Megan also informs him that he will be charged with the death of the dead girl as well. Tine in next week for more Body of Proof.