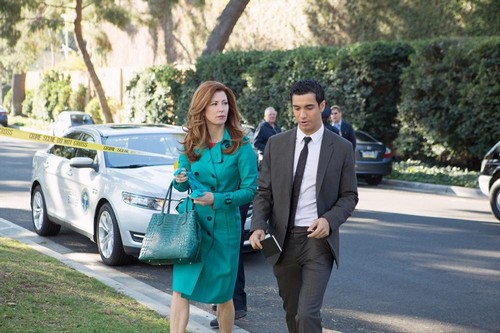 Tonight on ABC BODY OF PROOF returns with a whole new episode called, “Doubting Tommy.” On tonight’s show the stakes are life and death when Tommy is accused of murder and Megan is his only hope for exoneration. Did you watch last week’s episode? We did and we recapped it here for you!

On last week’s show Megan and Tommy investigated the savage murder of a young woman, which led them to her neighbor, who bit Tommy and was diagnosed with rabies. When another rabies fatality came in without any bite marks, Kate called in the new health commissioner, Dr. Charles Stafford (Luke Perry), to help Megan uncover the truth.   Like Perry guest starred as Dr. Charlie Stafford.

On tonight’s show A young girl is found murdered, and when Megan arrives at the scene, she finds Tommy covered in blood. As the evidence piles up against him, Tommy claims he cannot remember what happened the previous night. Though Megan has doubts about Tommy’s involvement, she’s the only friend he has in this situation and has to put her personal doubt aside to try to prove his innocence. 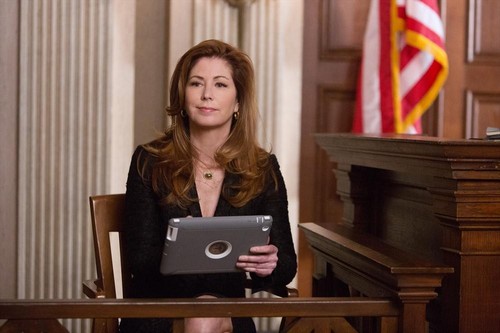 Tonight’s episode begins with Tommy and Megan in court each taking a turn on the stand disagreeing over the findings of a case. Tommy convinces her to have a drink with him later and they rehash their previous relationship. As it turns out they were at one time an item until he blew it by cheating on her. He suggests they hook up but Megan decides against it and leaves the bar. She walks outside and returns after having a change of heart but sees Tommy getting really close to a young blonde. Sure enough the next morning the blonde is dead and Tommy is knocked out cold behind her home.

Tommy doesn’t even remember leaving the bar, let alone what happened to Skyler.  Megan gets her hands on the bar surveillance tape and brings in a woman that reads lips. According to her Skyler has been coming onto Tommy and he tells her she’s going to regret bothering him before he drags her out of the bar by one arm. His hair was found in her bed and his belt was the murder weapon. His blood work came back normal but they still think he is being framed.

Tommy took Skyler to The Red Light Club and got into a fight with a bouncer. Kate  has been informed that Tommy left the NYPD because of anger issues and that he had control issues in the past which could match up with this crime now. Kate decides to take Megan and Adam both off of the case. That last only a few hours and then Megan calls Adam and tels him to meet her at that club to chat with the bouncer.  The guy shows Megan where he and Tommy fought and she pulls a blood sample from the floor. Her reasoning is that if he was drugged proof might be in that sample. The one that was taken hours after the incident was likely inaccurate because drugs would have left his system. Of course the earlier sample proves he was drugged.

Megan brings this info to Kate, who agrees that Tommy should at least make bail in light of the recent findings. Megan also admits that she and Tommy were involved when they both lived in NY and that she knows what he went through while there.

Megan brings this info to Kate, who agrees that Tommy should at least make bail in light of the recent findings. Megan also admits that she and Tommy were involved when they both lived in NY and that she knows what he went through while there.  As it turns out, Megan puts up her condo in order to bail out Tommy. She takes him back to the club and has them play the same music that was on the night Skyler died. Slowly he gets his memory back in bits and pieces. He realizes that she was trying to give him info on a prominent case and the gods prove that the police screwed up and the wrong man was put in jail. Not everyone wants this new information to be released including people on the inside. Eventually all charges in the original case are dropped and the killer was aprehended at the club. As for Megan and Tommy- they could get back together. Tune in next weel for more Body of Proof.