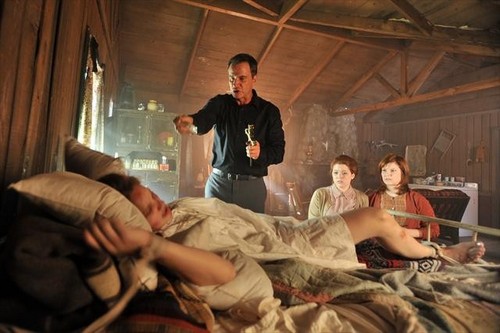 Tonight on ABC Body of Proof returns with a whole new episode called, “Abducted – Part 2.” On tonight’s show after Megan discovers a disturbing secret relating to the murder case, she must keep it from her co workers and police in order to protect Lacey’s life.

On last week’s season premiere episode Megan returned to work months after Peter’s death, and she was surprised by a man from her past-Tommy Sullivan, the new detective assigned to her case. Megan, along with Tommy and his rookie partner, Adam Schaeffer, must stop a serial killer whose victims were young war veterans. As she learned more about the crime, the stakes rose when she got a call from the killer — who was holding her teenage daughter, Lacey, hostage.

On tonight’s show in conclusion of the thrilling Season 3 premiere of “Body of Proof,” Megan learns why a serial killer targeted war veterans and just how one of their prime suspects figures in the case. But the killer has kidnapped Megan’s daughter and is making sure that, now that Megan has cracked the case, she cannot reveal the answers to her team or the police while Lacey’s life hangs in the balance. Meanwhile, Kate comes under fire with District Attorney Dan Russell.

PLEASE NOTE: OUR INTERNET AND DIRECT TV IS OUT IN THE PHILADELPHIA AREA DUE TO AN ICE STORM. WE ARE TRYING TO RECTIFY THE SITUATION!

RECAP WILL BE POSTED WHEN WE GET BACK UP!!