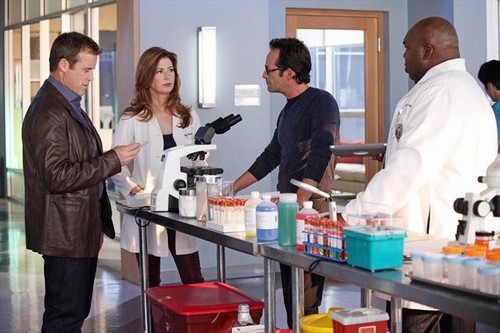 Tonight on ABC BODY OF PROOF returns with a whole new episode called, “Skin and Bones.” On tonight’s show are there zombies among us?  Megan is joined by the new Health Commissioner (Guest Star Luke Perry) in her quest for answers.  Did you watch last week’s episode? We did and we recapped it here for you!

On last week’s show Kate met Sergei (Ivan Sergei), a handsome and mysterious guest at a political event, and was irresistibly drawn to him. But when a young Russian girl was found murdered near the hotel where she and Sergei were having a tryst, Kate began to suspect that he may be involved and turned to Megan for help.

On tonight’s show Megan and Tommy investigate the savage murder of a young woman, which leads them to her neighbor, who bites Tommy and is diagnosed with rabies. When another rabies fatality comes in without any bite marks, Kate calls in the new health commissioner, Dr. Charles Stafford (Luke Perry), to help Megan uncover the truth. Could it really be zombies, as some of her colleagues suspect? 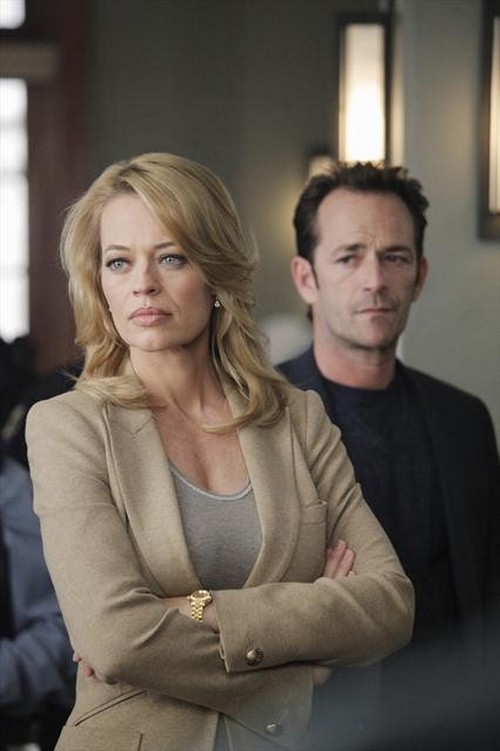 Tonight’s episode begins with a preschool teacher heading down the hallway of her home during a thunder storm. She makes it to the room to her door and something super human busts in and shreds her like a zombie. Her name was Melanie and Tommy thinks whatever killed her jumped from her window and dragged itself away. They follow a blood trail to a garage where Tommy is attacked by the rabid person. He pushes it off of him and shoots it before it tears him apart.

Megan inspects the body and determines by the crust around the guys mouth that he had rabies. That means Tommy is going to need shots, 20 of them. They tell him it’s as close to a zombie attack as anyone can get. Megan gives him his shots, after she turns him down for a real date to a Flyer’s game. Before she gives the shots Ethan busts in and tells her that Melanie had no bites on her, meaning the virus is mutant some other way.

As they talk another rabies victim turns up on a bus. An Asian guy tries attacking the driver until he is finally launched from the bus and lands dead in the street. Dr. Stafford, a health inspector is called in to take a close look at the virus and the bodies they were eating their way through. Megan realizes that both men have had recent tissue transplants and that is how they contracted  rabies. There could be hundreds of cases out there. They need to find the tissue and are thinking that they might be able to test the DNA from a Cornea transplant.

Tommy is obviously interested in Megan and grills Kate on her relationship with Dr. Stafford. Meanwhile Megan showed a twinge of jealousy when Tommy’s ex showed up for a chat.

Tommy and Kate are searching for the identity of the body that the tissue came from and they’re given the address of a man named Ken who supposedly the harvester. They attempt to visit him at home but the lead is cold. Ethan gets an id on the cadaver finally and it’s a 21 year old kid that is still listed as a missing person. He questions whether or not the kid could have been killed for parts.

As it turns out 5 Philly college students have been reported missing in the last month. They see on a traffic camera that a hearse was at the abduction site. Ethan realizes that some of the fluids being used haven’t been used in funeral homes in 8 years so they think this guy is working out of a shuttered facility.  The last kid was abducted a week ago and they find him on a table gutted at a closed facility. The backyard is filled with fresh graves.

Sean Asher is the next victim to be abducted and he resembles all the rest, blonde, blue eyed athletic student.  Tommy does a bit of digging and realizes that one of the dead students had a roommate that fits the killers description and so the search is on to find a guy named Mason before he kills Sean.  They realize he worked security at a storage unit and Tommy gets there as he is about to kill Sean. He kills Mason as Megan walks Sean out of the unit whimpering.

Back at headquarters Tommy tries to get Stafford away from Megan and it blows up in his face with Stafford inviting Megan for dinner. Tommy decides to take Riley, the police officer he has worked with to the hockey game. Tune in next week for more Body of Proof!