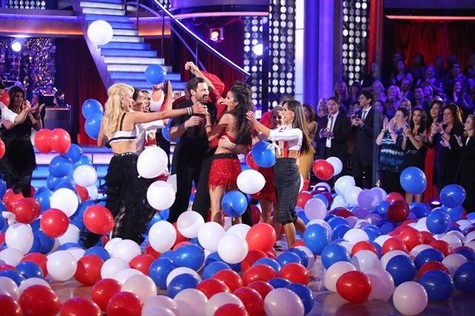 Tonight on ABC DANCING WITH THE STARS ALL-STARS, the seven remaining couples pay homage to Veterans Day with a night of meaningful performances.   The remaining couple will face two eliminations this week.

On last week’s show the remaining seven couples faced a fusion routine to try to outlast one another as they competed in this season’s dance marathon.   The remaining couple faced no elimination last week.  Did you watch last week’s performance show? We did and we recapped it here for you!

Tonight’s show will include two rounds of competition for the seven remaining couples, a Ballroom and Latin Trio round. In honor of Veterans Day, the first round will feature performances to songs that pay homage to servicemen and women. During the Latin Trio round, each couple will be joined by an eliminated pro or Troupe dancer. The audience will also be joined by members of several branches of the Armed Forces, including two former Marines, William Franco Vasquez and Nick Jones Jr., who will be special guests on an episode of ABC’s hit comedy “The Middle” on November 14.

Tonight’s episode is going to have all the usual glitz and glam in the ballroom, which you won’t want to miss. So be sure to tune in for our live coverage of ABC’s Dancing With The Stars All-Stars Week 8 Performance Show – tonight at 8PM EST! While you wait for our recap, hit the comments and let us know what you thought of last week’s episode of Dancing With The Stars All-Stars.

Len: “Sometimes a whisper is louder than a shout, this was quiet and gently louder than any music.  I loved it”

Bruno: “That was heavenly perfection, touched by an angel, emotional – the shapes and the figures.  When you were in arabesque it was fantastic!”

Carrie Ann: “You know you started out as a powerful performer and now you turned into this in-depth performer I felt the emotion in the room!”

Len: “You are my hero, you came out with verve and passion – I tell you what it was full on attack and it was great!”

Bruno: “Apolo that was a devil of a Tango, those guns are fully loaded for maximun fire power.  You were Tom Cruise in Mission Impossible.  Fantastic!”

Carrie Ann: “I loved it, it was fantastic – I loved it your lines were fantastic.  I wants to be Karina and so does everyone else! WOW Apolo!!”

Bruno: “It does help to maintain the line, it was stylish, it was nice, well done, nice dance!”

Carrie Ann: “I thought the musical interpretation was perfect, your lines were perfect – your best dance ever.  I want to see more difficult next time.  But, well done!”

Len: “The flow of it  I did not always enjoy the movement – it was a little sharp.  It flowed nicely and I would like it a little more (crowd boos) I have my standards, Carrie Ann has none.”

Bruno: “You are a twinkling twirler, fantastic shape, you never lost the shape.  You gave your soul!”

Carrie Ann: “Commitment to the movement.  What I love about you – you are always pushing yourself to the edge,  You are growing every week.  it was Wow.”

Len: “This was thunder and lighting you came out with energy and control – that was a quick step!”

Bruno: “Talk about Quickstep.  It was fast and efficient.  The variation in the middle –  it was fantastic.  Definitely top gun!”

Carrie Ann: “It was so close it was almost top gun there were a few little things, some wobbling.  I was looking at the details.  But it was so good!”

Len: “This man puts the oo in smooth.  I would love a little more fluidity, but I liked it, it was great!”

Carrie Ann: “I thought it was very smooth and effective and you have the charisma going on.  But, you slipped a little.  I want to see you push yourself you are riding in the comfort zone.”

Len: “It was a quickstep and that was what we got,  It was quick, it was great! That was the bees knees!”

Bruno: “Oh Melissa I want to join the navy.  It was like watching Anne Meara and Gene Kelly fantastic!”

Len: “If I was sitting in the audience I would be cheering.  I have to judge a Samba – it was very self indulgent, there was very little Samba content. If you go home blame those two.”

Bruno: “Very naughty you three, I got jungle fever.  As art it was absolutely fantastic, it had a animal quality.  It was not samba.”

Carrie Ann: “I disagree completely, sometimes you have to take a risk.  There was not a lot of Samba, but what there was – was executed with perfection.  They brought it in 21st century”

Len: “It was fast, it was quick and it was together – that is what you want.”

Bruno: “You took a huge risk with this, but I tell you, you conquered this brilliantly.  It was like watching twins.  You are at the top of the game”

Carrie Ann: “I have never seen you shine brighter.  It was one of you best, vibrant performances!”

Len: “There was not incidence.  It had aggression, but it lacked finesse.”

Bruno: ” You always give it a surreal interpretation.  You have to scratch under surface.  As a Paso Doble it could have been a little more defined.”

Carrie Ann: “Thank you so much for your choice of men.  I loved the theme, I loved the costumes and I loved the presentation.  It was a little sloppy as a Paso Doble!”

Len: “I liked the end I tell you that.  It had the X factor it was fun and fast and fantastic!”

Bruno: “What  a swinger, You can take one and you can take the other.  I loved when you were leading it was so difficult and u did it well!”

Carrie Ann: It is so hard to go back and forth, the transitions were difficult i liked it.”

Len: “I can only judge it as I saw it.  You exposed yourself, you did not hide behind the professionals, it was full on, well done!

Bruno: “Gilles Menage au Trois comes natural to you.  Your intent in taking care of the ladies was so strong, you lost timing a couple of times.”

Carrie Ann: “I agree with Bruno, but I love how you came out and took control of the dance floor!”

Len: “It was like watching two yoyo’s at the same time.  The choreography was clever, knockout!”

Bruno: “The salsa is smooth, easy and natural and that is exactly how you did it!”

Carrie Ann: “Last time you were in your comfort, this time you are in a red hot salsa zone.  That is the Emmitt we love!”

Len: “You moved seamlessly you were like a Frisbee.  Of all all celeb you impressed me the most!”

Bruno: “Queen Bee you were flamboyantly fabulous.  That Paso Doble was astonishing.  It was a think of beauty.  You should make the finals”

Carrie Ann: “I agree with what everyone said, you owned that Paso Doble!”

THE END – Join us tomorrow to see who the 2 couples eliminated are!!!