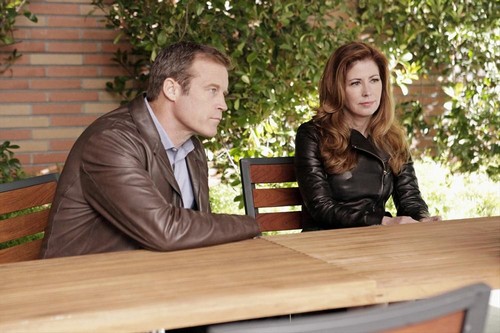 Tonight on ABC BODY OF PROOF returns with a whole new episode called, “Committed.” On tonight’s show does a mental institution harbor a murderer?  Megan and Tommy are on the case. Did you watch last week’s episode? We did and we recapped it here for you!

On last week’s show a rich investment fund manager, Gerry Roberts, stood trial for defrauding his investors of a billion dollars, but he was kidnapped as he was leaving court, even though Tommy and Adam were on his security detail. In all the chaos, a protestor outside the courthouse was run over and killed by the getaway car, and later a video surfaced of Gerry being killed. But was it possible he faked his own death? Megan also got closer to the truth about her father.

On tonight’s show a schizophrenic teenage girl at a mental institution is found murdered. When Megan and Tommy interview a young patient named Darby, who seems extremely sane and lucid, she tells them that she saw the killer climb down from a heating vent in the ceiling, but most shocking of all — he meant to kill her, not the actual victim. Could the killer be Dr. Malcolm (Craig Bierko), the ward director, who is obstructing their investigation?

Renee Caldwell was a patient in a mental hospital. At least until she turned up face down, dead in a shower. Tommy and Megan are called in to interview fellow patients and of course initially their leading suspect confessed to killing Renee and John F. Kennedy.  A girl named Darby talks to Tommy and Megan outside and insists that she’s not crazy and was put in the hospital to keep her from telling what she knows. She saw a man drop from the ceiling and accidentally kill Renee rather than her. She is ushered away before they can ask questions but Megan can’t forget her.

Megan stops to talk to her mother about her father. She ran labs and got a partial imprint, leading her to believe that he was murdered. Tommy did some digging and finds out that Darby’s kid sister, Beth, was killed in her own bed years ago.

Tommy and Megan go to visit Darby and find her completely drugged at the hands of Dr. Merrick. Megan is pissed and is believing Darby;s sad more each minute.

An investigator checks the hospital vent and sure enough they find prove that someone used it. They manage to talk to Darby and she says that her mom tried to kill her. She’s the one that killed Beth and Darby saw her so she’s got a target on her back. Megan talks to Darby’s mother and the woman paints a picture of Darby being a nuts and totally schizophrenic.  In fact she has talked to Malcom and they are planning to do Electro Shock Therapy on Darby. That’s one way to make her forget.

Darby is on the table for the procedure and she bashes Malcolm on the head, busts a window and then runs.

She makes it off hospital grounds and is running around Philly in the dark. Kate completely flips and after she finishes ranting Megan gets a call from Lacey. Darby made it to Megan’s house and is playing scrabble with Lacey.

Megan and Tommy run to her home and get Lacey. Tommy tells her that he just wants take Darby to the hospital. Once they have Darby she describes the night her mother killed Beth and how she begged Darby not to tell anyone. They get enough for a search warrant and find a pearl necklace that Darby attached to the murder. They test the pearls and Beth’s blood is on it.

Darby’s mother insists that it was Darby who went to check on Beth and killed her. She has hidden the truth because Darby was now the only child she had left. Megan is driving with Darby when Tommy and the lab techs realize that Darby killed Renee and Beth. He calls Megan and tells her to leave her phone GPS on because he’s on his way to her. Darby tells Megan she’s a great liar and opens the door and rolls out of the moving vehicle. Megan chases her and Darby runs up to a cop screaming that Megan had pulled a gun. She identifies herself and is about to check her credentials when Darby stabs him in the shoulders.

Darby is arrested and her mom again tries to explain why she protected her daughter. She sees now that there’s no hope. Tune in next week for more Body of Proof.