BY Kristine Francis on May 28, 2013 | Comments: 2 comments
Related : Body Of Proof, Recap, Television 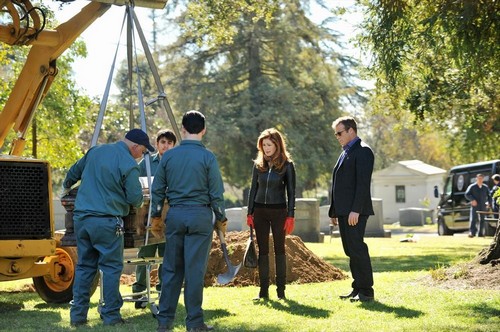 Tonight on ABC BODY OF PROOF returns with a whole new episode called, “Daddy Issues.” On tonight’s show will Megan finally learn the truth about her father’s suicide?  Fine out tonight on the season three finale. Did you watch last week’s episode? We did and we recapped it here for you!

On last week’s show when a plane crashed in Philadelphia due to a gunman opening fire while aloft, the entire team of Megan, Kate, Tommy, Adam, Curtis, Ethan, Riley and Stafford had to go into disaster mode. Since the crash hits the city’s main power grid, Megan had to conduct autopsies on the victims during frequent blackouts, but then one of the bodies went missing. Meanwhile, Tommy and Adam were in a serious car accident while trying to investigate.

On tonight’s show Tommy goes along with Megan to her father’s exhumation, which only yields more mysteries to what she has always been told was his suicide. Megan’s mother, Joan, suggests Megan look into her late husband’s patient files, which may be connected to his death — and that of one of his patients, too.

There’s a new murdered body on the scene. But both Megan and Tommy took the day off. What could they be doing? Well Megan went to exhume her father’s body and Tommy just happen to tag along. However the coffin was empty.

Megan goes to her mother, who is still angry about exhumation, and tells her about her dad. Her mom is outraged. She’s trying to deny the obvious but Megan won’t let her. It’s time to accept Megan’s dad was murdered.

Elsewhere, Tommy has to explain himself when the Chief finds out about his off the books investigation. She’s willing to give him leeway although not much. Later when Tommy rejoins Megan they go through her father’s things at the man’s former job. Some things nevertheless appear to be missing.

Trying to walk it off she can’t but to run into Trent. He supposedly wants to help her but she refuses. She’s not going to trust a murderer. When she gets the time she delves into her father’s things. She finds a recorder that gives her some cherish memories. Then she finds a key which she knows will help her father’s case.

Tommy and Megan are searching her father’s office to find out what the key opens when Tommy brings up her unfinished voicemail weeks earlier. She diverts him before spotting some missing files.

Kate, Ethan, and Curtis are back at the office with the body. The body has been mauled in order to keep its identity hidden but no matter what the team attempts they can’t find out John Doe’s identity.

Inside the file was a picture of a battered woman. The woman was killed a day before Megan’s father. They do have the girl’s killer locked up though. A notorious serial killer named Earl Brown. Tommy and Megan go in to see him at prison.

During the Mr. Brown twisted take down memory lane, the man implies he never killed the woman in the picture. Megan and Tommy are skeptical but as Earl says. He’s not going anywhere, why would he lie.

Megan and Tommy decide to talk to the main investigator on the age old case. Former Detective Glen Fitz simply tells the duo that Earl is pulling their leg. There was too much evidence.

Looking into the supposed strong evidence. Megan figures out that young woman was killed differently than the others. She was apparently killed in a police stronghold. It also explains all the evidence conveniently pointing to Earl. She was killed by a cop. Was it Glen Fitz?

Tommy takes the news to his chief. He gets her ok to question Fitz but she warns him to tread carefully.

Kate and Curtis catch up. Kate remembers how she loved the actual investigative work and is now having second thoughts about becoming a congresswoman.

Tommy is questioning Fitz. Fitz denies everything much to Megan’s rage. She rushes in to confront the guy and ends up possibly destroying their case. She believes Fitz is the guy and doesn’t want to wait around for anything so silly such as evidence. Is it coincidence or planning but either way Megan runs into Trent again.

Trent offers his help again and this time Megan hesitated before saying no. Yet she does admit that Trent understands her. She tells him she’ll handle it on her own. So was it her that shot Fitz or did Trent ignore her request?

Megan is looking through the files doing her best to find proof when Kate walks in with a sketch of her John Doe. Megan knows who he is. John Doe was the second detective on the woman’s case. She brings the new evidence to the Chief. She’s driving the Chief back to the medical examiner’s office when the Chief pulls a gun on her.

The Chief was the one who killed the girl and Fitz, an old family friend, covered it up for her. She had the gun to Megan’s head and planned to shoot never expecting Trent would show up and shoot her instead.

The police go in search for Trent but never find him. Still he leaves behind a book for Megan with the message “You’re Welcome”.

Megan helps her mom come to terms with the night’s revelations and then she goes to Tommy’s. She rambles a little bit but Tommy knows how to make her stop. He kisses her.