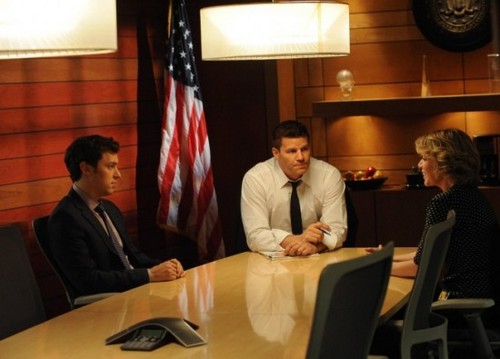 Tonight on FOX BONES returns with a whole new episode called, “The Lady on the List.” On tonight’s show Brennan and Booth finally start to plan their wedding and Sweets could be replaced by a virtual profiling system.  Did you watch last week’s episode?  We did and we recapped it for you HERE!

On last week’s show Pelant, is back, and the members of the Jeffersonian team want to put an end to the hold he’s had over them, once and for all. When a human cadaver was willed for research to the team, they devised a plan, with the help of Special Agent Hayes Flynn (guest star Reed Diamond), to stage the human cadaver in a way that Pelant would stage a murder, and steal his spotlight in order to flush him out. But their plan backfired when Pelant is a step ahead of them, resulting in him killing someone close to Booth. Meanwhile, Sweets returned from his leave of absence and was convinced that Agent Flynn isn’t the person whom everyone thinks he is.

The Jeffersonian team investigates the murder of Charlie McCord, a high school principal who, upon learning he had terminal cancer, created a website where people could go and pay for his inspirational videos. When the team finds a suspicious video of Charlie punching former UFC Light Heavyweight Champion Chuck Liddell (guest-starring as himself) in the face, it leads the team to Charlie’s bucket list, which ultimately helps them get closer to solving the case. Meanwhile, Brennan and Booth finally start to plan their wedding and Sweets could be replaced by a virtual profiling system.

Tonight’s Bones season 9 episode 5 is going to be exciting, and you won’t want to miss. So be sure to tune in for our live coverage of Bones — tonight at 8PM EST! While you wait for our recap, check out the sneak peek of tonight’s episode below!

Booth and Bones are planning their wedding. They have to make time at crime scenes to do it but they’re getting it done. They can agree on one thing. They won’t be accepting anyone’s help in planning it. Their friends can be too pushy and the day is about them.

Later Booth has to explain to Sweets that no they don’t need help. Sweets thought that’s what Booth wanted to talk to him about when instead Booth had to deliver some bad news. It seems the bosses have installed a program to do soe profiling. They’re basically testing out Sweets’ ability vs. a machine. If Sweets were to lose then he might find himself redundant.

Dr. Oliver Welles is back and he’s just as helpful as ever. In between the times they have to disturb him from his book he manages to help they realize their newest victim was murdered. Why would someone go through all the trouble to kill this man when he was dying anyway is the real question. The victim had advanced terminal cancer.

Angela is able to identify the victim. He was a married father of two that had suddenly become a self-help guru. He used the way he confronted death in order to give advice on facing life. His widow says he started the videos as way to earn money for his family after he was gone.

However Charlie wasn’t as sweet and cuddly as she let on. Before he died Charlie went up to a muscle head and sucker punched him. He ran away in time but Angela points out the guy Charlie hit was the current mix martial arts champion. A man known for getting retaliation. That time Charlie could have bitten off more than he could chew.

The iceman didn’t hurt Charlie. Sure he was mad he got hit but when he spoke with Charlie he found out that hitting him was on Charlie’s bucket list. He was flattered and thought Charlie was a nice guy.

Speaking of bucket lists. Angela creates one for Oliver. All day he was being a jerk to everyone so Angela got a little revenge by giving him a bucket list. It’s 1 thru 10 list on don’t be a douche. He gets the point she was trying to make. He’ll try to be better and he starts off all on his own. He genuinely felt sad for Charlie. The man barely had six weeks left when he was killed. Oliver found that sad his already shorten time was cut again.

Charlie didn’t have his wife as his person. Not for all of his medial needs. He had a former student he helped out be the one to help him. He helped with Charlie bucket list as well. Unfortunately he stopped once the list became too dangerous. He didn’t see the need for Charlie to continue but he knew he did. Charlie has two things remaining. To go rock climbing and to make it up to a woman he got fired and arrested. The woman lost everything because of Charlie including her kids.

Sweets really hates the program Val. Val has Lena, the woman that embezzled and was caught out by Charlie, listed as the number one suspect. They haven’t talked to the woman yet and Val has predictions. Sweets just found that program cost 3 million while he’s waiting for a raise. If Val keeps making snap judgments, he’s going to destroy it.

When Booth and Bones go to investigate Lena they find Val could be on the mark with this one because who opens the door wielding a weapon. That’s a parole violation on her part.

Bones told everyone that she didn’t want any help in planning her wedding. But she would love for Angela to help her go dress shopping. Bones had a dress picked out since she was eight and she checked it with Angela to see if it was good. It was.

Sweets doesn’t believe Lena did it. Leaving the only possible suspect to be Charlie’s wife. She’s making a lot of money from the videos now that Charlie died. Then there is the fact arsenic was found in Charlie’s system. It served to speed up his deterioration. His wife may have wanted her share of the money sooner rather later. Particularly after she found out that Charlie left money to Lena as way of making amends.

The wife claimed she never knew if she gave him arsenic. She only gave him homeopathic herbs.

The real killer didn’t have anything to gain financially. It was Charlie’s protégé. The kid that he helped get a job. It seems the kid wanted a part of Charlie’s legacy and hated that Charlie was willing to give Lena over him. The man was a second father to him and yet it didn’t matter to him. Only the money did.

Val is going offline. She picked the wrong killer just when she became Oliver’s only friend. Camille is happy to unplug after that tidbit.