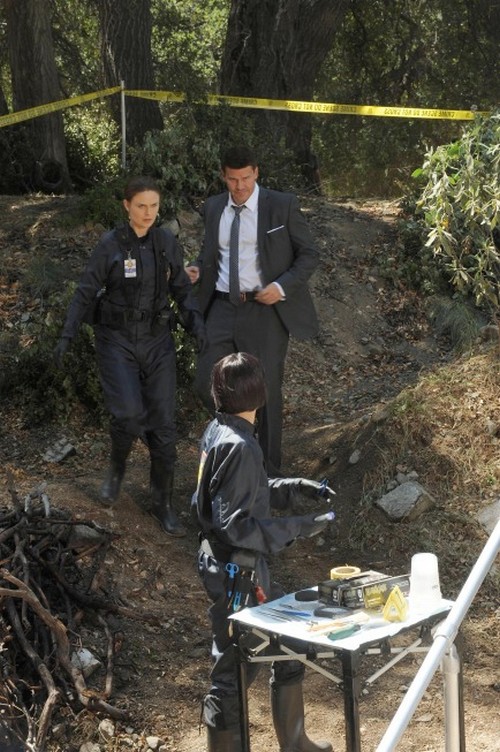 Tonight on FOX BONES returns with a whole new episode called, “The Nazi on the Honeymoon.” On tonight’s show Hodgins gets in touch with his motherly instincts when he plays host to a fly larva.  Did you watch the last episode?  We did and we recapped it for you HERE!

On last episode while honeymooning in Buenos Aires, Brennan and Booth couldn’t just relax on vacation. So, instead, they decided to help Raphael Valenza (guest star Joaquim De Almeida), a local detective and huge fan of Brennan’s books, solved the murder of a Nazi war criminal whose remains were found in an historic mass grave. Meanwhile, back in Washington, D.C., Hodgins and Angela struggled to take care of Christine while Brennan and Booth are away.

On tonight’s show The Jeffersonian team investigates the murder of Sean Nolan, a failed model whose body is found intertwined in a beaver dam. The team soon discovers that Nolan’s fruitless modeling career left his sperm donations as his only source of income. However, when the team learns that he falsified records, they start to suspect anyone who was jilted by his donations. Meanwhile, Brennan struggles with social niceties and tact when she is drawn into a feud with author Tess Brown (guest star Nora Dunn) and Hodgins gets in touch with his motherly instincts when he plays host to a fly larva.

Tonight’s Bones season 9 episode 8 is going to be exciting, and you won’t want to miss. So be sure to tune in for our live coverage of Bones — tonight at 8PM EST! While you wait for our recap, check out the sneak peek of tonight’s episode below!

A body was found out behind a rest stop. A young man and woman were looking for a beaver damn when they came upon it. Unfortunately the young lady spotted the dead body and assumed her companion was at fault. She immediately ran away alerting anyone in the vicinity he was trying to kill her. He wasn’t.

Bones and Booth are back from their honeymoon but things aren’t all roses. Despite a new and interesting case Bones is hung on another author’s criticism on her recent book. Bones can’t understand why anyone would pan her until Booth points out that she did something similar to the other author. Bones thought she was being factual when in truth she was acting without tact and insulted someone’s work.

She thought she gotten better with being tactful and was wrong. Out of anger she actually became even less tactful. She got Bray to ignore Hodge’s orders. Which only made his hand stick to one of the bone samples. He wanted to please her that much.

While Hodge is probably listening. He had gotten an apparent mosquito bite and told his wife he would get it checked out. He didn’t. He had learned a bug was growing in his neck and decided to get sentimental. He wants to give back to the creatures he studies by carrying the bug to term. Angela thinks it’s crazy. Bray on the other hand understands.

During their investigation Sweets talked to the girlfriend of the victim. His name was Shaun and he was a model. Yet while he told his girlfriend he was out of town a lot doing photo-shoots, the investigation revealed he was busy as a children’s park taking pictures f all the kids. No one understood why until Bones was able to view the children up close. They each carry a genetic trait just like Shaun. It seems he was the donor father of the kids he was following. The parents had started a group so the kids got to know their donor siblings.

Shaun lied on his sperm donation application. Once the corporation found out; they fired him. He claimed he went to Ivy League and because of that the lab were able to charge more for is sperm. Still they didn’t know Shaun had a narcissistic need to produce children. He even took natural supplements to increase his sperm count. Through his “children” he felt he would leave an immortal legacy. That’s why he wasn’t going to stop donating no matter what.

Bray was all for Hodge’s experiment till it got weird. He saw it move in Hodge’s neck and was naturally freaked out. Then to make it worse Hodge wants him to be a birth partner seeing as Angela wants nothing to do with the birth. Too much!

Bones did attempt to apologize to Tess the other author but she was as tactless as ever. Everything she said had a bit of a bite to it. Tess responded and in kind and the fight remains ongoing. Neither wants to back down quite yet. Luckily, Sweets has idea about the feud. He said Tess provoked a fight knowing Bones would be basically herself. She wanted to start a public feud. It was probably for attention and to be fair since the war of words began she’s been popping up more on the television.

There are various suspects in Shaun’s death. The lab, the parents, or his drug dealer. The last was looking the most promising to the feds but delivered nothing. All he was able to help with is that he told them Shaun had an unsatisfied customer. A husband used Shaun’s sperm and his wife still couldn’t get pregnant.

The man was angry but he was angrier Shaun was recommended to him by a sperm bank. The woman than runs the clinic is just like Shaun’s girlfriend. Shaun used her for cash during their secret affair but she saw it as love. She even got pregnant.

Shaun was murdered by a pick axe found at the scene. The person wielding it tried to gouge out his privates. Although crime can be done by both sexes this crime of passion was most likely done by a woman. Booth and Sweets suspect the girlfriend. However the woman laughs at the idea Shaun would leave her to raise a baby. She said Shaun would never stay to do the daily work required for a child.

The woman from the clinic killed him. She thought Shaun wanted a family but he didn’t. He was using the woman and when she learned that – she attacked. She thought he was a better man than who he really was.

Angela ended up being the one getting stuck helping Hodge. The botfly was born and is in mint condition. His name is Jefferson.

Bones took Tess to lunch. She said she wasn’t doing the fight anymore and left the other woman sputtering about how she knows her books are crap and her fans are idiots. Sadly a video of that went viral. Tess now no longer has a publisher or fans.