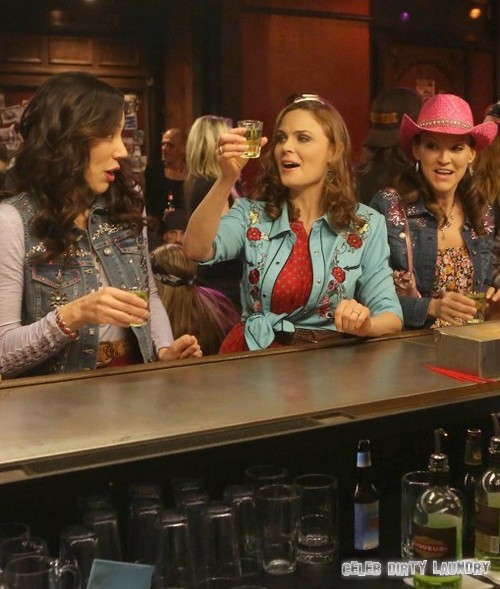 Tonight on FOX BONES returns with a whole new episode called, “The Mystery in the Meat.” On tonight’s show Angela plans a post-wedding bachelorette party for Brennan and it gets crazier than intended in the all-new.  Did you watch the last episode?  We did and we recapped it for you HERE!

On last episode Brennan was a juror on the case of professional soccer player Peter Kidman (guest star Brandon Quinn) who was accused of murdering his wife. When she used pure objectivity to help prove the killer not guilty, his best friend and a key witness in the case turned up dead. The Jeffersonian team had to work together to prove that the soccer star was in fact guilty of killing both his wife and his friend.

On tonight’s show the Jeffersonian team investigates the murder of a food scientist whose remains were tossed in a meat grinder and mixed into cans of stew served in a school cafeteria. When the team uncovers the scientist’s newest – and highly lucrative – food invention, they begin to track the trail of jealous competitors in the multi-million dollar food industry. Meanwhile, Angela plans a post-wedding bachelorette party for Brennan and it gets crazier than intended in the all-new.

Tonight’s Bones season 9 episode 10 is going to be exciting, and you won’t want to miss. So be sure to tune in for our live coverage of Bones — tonight at 8PM EST! While you wait for our recap, check out the sneak peek of tonight’s episode below!

Let start by saying this was a super gross episode and I think I am a vegetarian after it :-)  The show opened with instant panic at a High School when a bully thought he could steal someone’s lunch only to realize that the stew he was eating was made out of people.  Booth was enjoying his lunch when he got the phone call telling his about the discovery.   He instantly lost his appetite.

The Jeffersonian team went to the high-school, to contain the situation. It’s a big embarrassment over on Capitol Hill when tax funded school lunches start including human remains. But there are several pieces of good news (no pun intended). The remains found in the stew appeared to belong to one person and it wasn’t a child or student. That would have made things so much worse. Another tidbit is the remains all came out of a can which means the lunch ladies’ jobs were secure.

It also appeared all the cans came from one shipment and it was the remains of one single man.  The high school students were turned into cannibals because of the murder of the man.

They found out the food was inspected and the food inspections on the batch considered it second tier.  This meant it was fit for schools and prisons but not for supermarkets.  The reason it failed food inspection was because the stew was over spiced.  At first they thought that perhaps someone might have slipped into the meat processor. However the victim was stripped naked, so they knew this could not be the case.

So Someone killed him and then tried to get others to eat away the evidence.  They found out the victim was already dead at the time of his canning.  They discovered the victim was a food scientist.  His business partner reported him missing several days prior.

Right in the middle of the case Angela suggests to Bones that they should go out and have a little fun.   It seems Bones hasn’t been feeling like she was married.  So Angela suggest a Bachelorette party. How else was Bones going to feel married unless she said goodbye to her old single life.  Bones agrees and the all the ladies decided to go to a cowboy theme bar.

Oliver and Hodge stayed at the office trying to go through all of the dead scientist’s products.  They thought that someone might have been jealous of his work. Sweets and Booth tried the jealous co-worker angle but got nothing. The person he worked with the most also had nothing to gain. The only thing left was the products. Oliver and Hodge did find an interesting product. Bacon-flavored sexual lubricant. They thought it was delicious before they realized it was lube.

The man that ordered the lube from the dead scientist once threatened him. He said the scientist kept being late on the delivery date. Still a lot of people were threatening the scientist.

The Bachelorette party turned out to be a lot more fun than any of them would have thought. There were thrown in the beginning because the cowboy bar turned into a biker bar, but they let that one slide. A couple of drinks and card games later, the only wet blanket was Angela. She saw how out of control her friends were getting. Bones got so drunk she was unknowingly flirting with a biker which upset his old lady.   The woman tried to hit Bones and she dodged.   Bones in turn hit her and didn’t miss.

The women thought it was best to leave but were stopped by the other bikers’ wives .  A bar brawl ensued and it was fortunate no one was arrested.  Booth managed to talk to the sheriff.

The men made a lot of head way without the women.  They identified how the Scientist died and they found another suspect. The woman that was “stalking” him was a health activist and although she was stalking him she was not-guilty.  She stopped harassing Compton the moment he realized she was right, it was not Beef Stew in the cans. He realized someone he was working with was putting horse meat which contained toxic chemicals  into the food.   He told her that he was going to expose this person.

The toxic chemicals came from the horse meat hidden in the stew. Horses tend to carry different disease and vaccinations.   If eaten, especially by children, it could make them seriously ill.  The scientist found out and tried to confront the boss of the food company. One thing lead to another and the Boss decided to kill the scientist.   Bones was able to catch him when he couldn’t get all of the scientist’s blood out of his hair. It showed up under ultra-violet light.