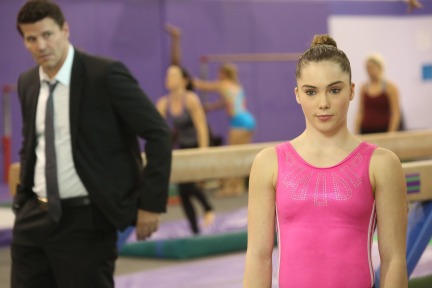 Bones returns tonight with an all new episode called “The Spark in the Park.” Did you watch the last episode? We did, and in case you missed it feel free to check out our full recap RIGHT HERE. On tonight’s episode, the Jeffersonian team will investigate the death of a nationally ranked gymnast whose remains are discovered scattered and spread throughout a park after being hit by lightning! Olympic gymnast McKayla Maroney (whose character is the main suspect) guest stars.

Here’s the official episode synopsis: Bones Season 9 Episode 11 “The Spark in the Park” – The Jeffersonian team investigates the murder of a nationally ranked gymnast, whose remains were hit by lightning and scattered throughout a public park. Although evidence points to a fellow gymnast (guest star Maroney) as the key suspect, Brennan and Booth discover the victim was leading a double life. Meanwhile, Booth gets upset when Brennan shows surprising empathy for the victim’s father (guest star Schiff), and Cam confronts the woman who stole her identity in the all-new “The Spark in the Park” episode of BONES airing Friday, Dec. 6 (8:00-9:00 PM ET/PT) on FOX.

Some good Samaritans find a corpse and because they’re so nice they wanted to protect the evidence for the authorities. It was raining so they put an umbrella over the victim to preserve the scene. Unfortunately, soon after lightning hit the umbrella causing it to explode in a fiery mess. The victim body became several pieces thrown all across the area. Not that it was a big deal to Bones and her team. Just the opposite, she’s excited about having a corpse struck by lightning.

Cam can’t share in her enjoyment at the moment. The woman who stole her identity was found and she’s all Cam is thinking about. Prior to arriving on the scene, Cam had gone to meet the woman when she lost control and suddenly slapped her. If it wasn’t for the body of what appears to be a teenager then Booth might have to stop Cam from turning his office into WWE.

Their victim shows signs of several broken bones going back years with the recent one being several weeks ago. The team suspects her parents, the ones that look perfectly normal, of having killed her. Whoever committed the crime knew the victim. Sweets suggest the girl’s killer loved her.

Her name was Amanda.

They were able to track down the father using a piece of her jewelry. He revealed his daughter was a gymnast on the national level thus explaining her bruising. As for his wife, she died last year from cancer. Although the bruises are set aside Booth still doesn’t like the father. He finds the man too calm. Bones has to explain the man was renowned physicist. He can only escape the loss of his family through his work. She would know because she would do the same thing in his position.

Arastoo thought with the culprit getting caught then Cam would have peace of mind but she doesn’t. Now she wants revenge. If she can prove Hailey stole her identity out of malice then it could add more years to the woman’s overall sentencing. Arastoo can preach forgiveness all he wants and unless Cam is willing to listen ten surprise it won’t do any good.

Booth still has the father as a suspect even though Bones disagrees. Sweets says they have to look at the facts in the case instead of relying on Bones’s feelings or better kinsman ship with the professor. Which was odd coming from Sweets the man that relies are reading other people. What does she do? Ignore the both of them and visits the professor again. This time on her own. She went to speak to him when she noticed that he stopped working. She knows what it means for him to stop. It’s why she talked him out of suicide by saying if he were to kill himself then his daughter’s killer will never be found. The authorities would assume he killed himself out of guilt.

During their investigation the team learns that Amanda stopped showing interest in gymnastics. A friend of hers said she started to hang out with different people. Including a drug a dealer and another prodigy. The girl’s name was Rachel. She was a cello prodigy and she made and agreements with Amanda that they’d both tell their parents how they wanted to quit. Rachel told her parents and left Amanda to tell her father.

What saves the professor is the fact Bones realized how Amanda. Amanda was strangled against a high beam. Something that can only be found at the gym she used to practice out. At the place, Bones found evidence of Amanda’s vomiting as well as a piece of Amanda’s tongue.

However it wasn’t Amanda’s couch that killed her. It was Rachel. Their agreement fell though. Rachel had told her parents but Amanda didn’t keep her part of the deal. She changed her mind and never brought up quitting to her dad. Rachel couldn’t take her only friend not being with her and so she killed Amanda.

Cam went to visit her ex-friend, Hailey. She was ready to forgive and yet saw no remorse whatsoever in Hailey. The trip served to accomplish something though. Cam realized she didn’t want to be as poisonous as Hailey. She wanted to be able to move on with her life.

Bones went back to the professor and she learned what he was working on. He was writing out his daughter’s life in equations. It’s how he chose to mourn her.