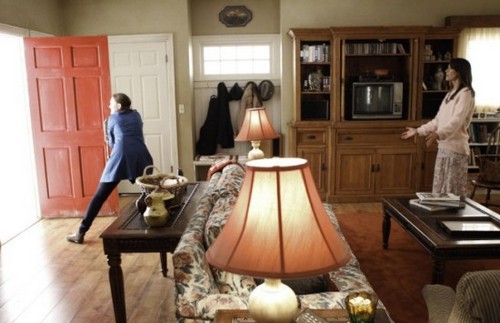 Tonight on FOX BONES returns with a whole new episode called, “The Shot in the Dark.” On tonight’s show all evidence suggests that Brennan’s attacker may be linked to the Jeffersonian. Did you watch last week’s show? We did and we recapped it for you HERE!

On last week’s show Brennan and Booth investigated the death of a female roller derby skater whose body was dismembered. In order to get more answers, they enlisted Angie to go undercover as a derby skater. Meanwhile, Cam tried to uncover the details behind Booth’s secretive hospital appointments.

On tonight’s show when Brennan (Emily Deschanel) is shot while working late at the Jeffersonian lab, she is rushed to the hospital in critical condition. While at the hospital, she struggles with visions of her mother that defy her usual logic. Meanwhile all evidence suggests that Brennan’s attacker may be linked to the Jeffersonian. 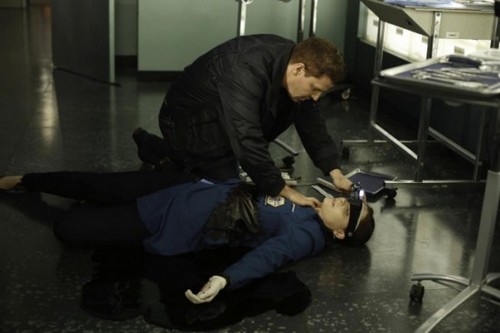 Tonight’s Bones episode 10 is going to be exciting, and you won’t want to miss. So be sure to tune in for our live coverage of Bones — tonight at 9PM EST! While you wait for our recap, hit the comments and let us know how you are enjoying Season 8 of Bones? Check out a Sneak peek video of tonight’s episode below!

Bones is in the lab, looking over a dad body which has been burned. The body’s been dead for 5 days but there is enough tissue for testing. The initial indications are that he jumped over a bridge, but Brennan thinks he was murdered and thrown off a bridge to obscure that point. Someone comes into the lab and shoots her Bones.

Booth and bones get into a fine. He doesn’t think she’s not spontaneous enough. He doesn’t want the baby to grow up the same way. Booth, with Christina, arrives at the lab to find Booth lying on the ground. He calls for help and tries to will her to open her eyes.

Bones has an out of body experience. She reunites with her mother. Bones believes she is having a hallucination while her mind and brain process what has happened to her. Bones says that her mother should already know everything about her since she is a projection of her memory.  Bones says she loves Booth and Christine very much and has to get back to them. Bones’ mom says it’s not her choice as she struggles to open the door to the house. Bones’ keeps saying that she has to go back to her daughter while her mom says she understands-she had to do the same.

Bones is transported to the hospital. She has lost a lot of blood. Booth tells her that she’s got to fight for them. Booth is told by Camille that she has been stabilized after her heart stopped twice. Booth says that Bones doesn’t believe in God, but he can’t explain why he found her when he did. The girl doctor says she is going to do the autopsy on Howell who died. He was also shot. Camille says there was no bullet found in Bones or Howell and that it doesn’t make sense.

Bones starts to wake up while lying in the hospital bed. She wants to know what happened. Booth tells Bones she was shot. Max is glad that his daughter is going to be alright and says that he’ll take care of Christine. Booth says that Bones was dead for two minutes when her heart flat lined for two minutes.

Camille and Angela discuss what might have happened. Jack says it may have been an ice bullet. Lance is trying to get to the bottom of who shot Bones but it is clearly personal for him. Booth tells Lance that he and Bones got into a fight before she was shot; he can’t believe that this was almost their last conversation and that she thought he was accusing her of being a bad mother.

Angela says that Hal may have killed Johanne Goot (the man who was found dead), explaining why he was so interested in the body when it was brought it but the question now becomes who may have killed him.

Booth discovers that Goot must have been living above his means and probably involved in illegal activities.

Bones loses consciousness while talking with Angela. She reverts back to her out of body experience. She tells her mother that she was last 15 when she saw her; that they had a fight about a boy the night before she disappeared. Bones is revived. It turns out she had a bad reaction to some blood she was given.  Bones feels like it is Booth who keeps calling her back from the place where her mother is. He believes that she is actually seeing her mother.

Jack realizes that Bone’s body reacted to the blood; that her blood has mixed with the ice bullet. Camille kisses him, obviously believing they have to a breakthrough.

Clark and Camille examine the bullet and how it impacted the bullet wound to Howell’s brain. Meanwhile, Bones is examining the X rays. Max wants her to take it easy and questions Max about seeing her mother. She gives a medical explanation as to why but Max wants to know if she asked about him and if she said hi. Bones says that she does miss Max. Max misses being happy with her so much.

Jack discovers that Howell was hit with a golden artifact before shot.  It turns out the shooter, the guard and Goot were all working together. Booth and company trace down Dr. Baitowne who is trying to restore the painting used to attack Howell. He was the mastermind behind the attacks. He has been captured on camera being in the video. The crimes were orchestrated to smuggle in paintings and forgeries. Booth attacks Baitowne.

Bones is going into surgery again to retrieve the antigens as evidence against Baitowne. It’s 100% risky but Bones says she will be fine. Bone has another out of body experience. Her mother is getting ready to leave. Bones is afraid she will never see her mother again. Her mom says that Bones needs to find the little girl inside of her because it’s not about surviving but flourishing.  Bone wakes up from surgery. Booth tells her that the blood matched and that Baitowne was arrested for murder. Bones gives Max a message: Mom knew that the fist gift he have her, he stole from her. Max says that no one knew that except him.