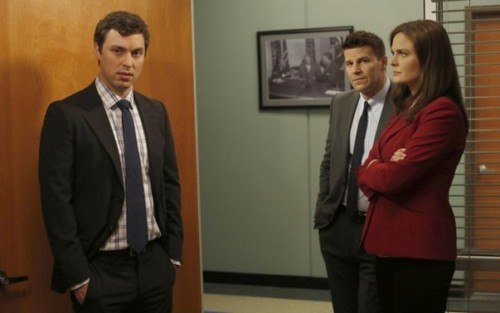 Tonight on FOX BONES returns with a whole new episode called, “The Friend in Need.” On tonight’s showThe investigation takes an ugly turn when an underage girl confesses to being raped and the deceased boy’s reputation is compromised. Did you watch last week’s show? We did and we recapped it for you HERE!

On last week’s show when Brennan (Emily Deschanel) was shot while working late at the Jeffersonian lab, she was rushed to the hospital in critical condition. While at the hospital, she struggled with visions of her mother that defied her usual logic. Meanwhile all evidence suggested that Brennan’s attacker might be linked to the Jeffersonian.

On tonight’s show the Jeffersonian team investigates the remains of a 15-year-old boy. Although his mother and few close friends saw him as intelligent with poor social skills, the team discovers that this seemingly innocent boy was actually involved in illegal activity and had attended a high school party two weeks prior where drugs were present. The investigation takes an ugly turn when an underage girl confesses to being raped and the deceased boy’s reputation is compromised. 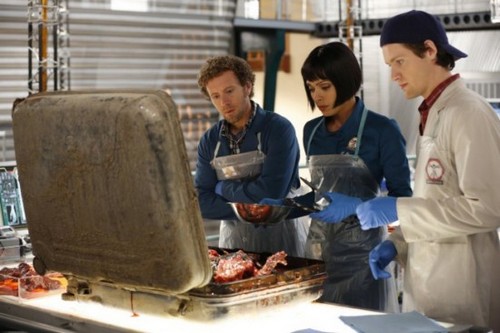 Tonight’s Bones episode 10 is going to be exciting, and you won’t want to miss. So be sure to tune in for our live coverage of Bones — tonight at 9PM EST! While you wait for our recap, hit the comments and let us know how you are enjoying Season 8 of Bones?

A homeless man named Reggie tries to sell a filthy suitcase he found by the river. Reggie pries it open and inside are bloody human guts. He brings his final offer down to 50 cents.

Bones is figuring out Boothe’s crossword puzzle. They’re bantering when they get a call about the remains being delivered to the lab. Bones deduces that the victim is male. Camille becomes uncomfortable as Bones talks about her daughter’s sex life as a way to break the tension.

Boothe and Lance inform the family that the remains of their loved one, Manny, have been identified through dental records. His mother last saw her son two weeks ago. His sister had encouraged him to go to a party. Camille calls Boothe and tells him that drugs were found in Manny’s system. The mother rejects counseling because they’re friends and family people—not psychology.  Boothe searches Manny’s room.

Camille and Angela try to figure out what Manny was doing the night he was killed, reading through phone records. Camille wonders if Michelle is keeping anything from her. Angela gets a hit on one of the guys that Manny was texting—a guy named Nick.

Boothe meets up with Nick. Nick says he felt sorry for Manny and was trying to integrate him in the community. Boothe thinks the two were dealing drugs which Nick denies. Nick eventually says that Manny was the brainiac of the operation while he was more social.

Angela manages to find pictures from the night of the party as some of the kids uploaded them. Manny was angry and following a girl around the party which led to a fight between Manny and the boy the girl was flirting with. These are the last photos of the boy alive.

Boothe brings in the kid that Manny was arguing with. The kid denies any involvement. He says he’s a senior and the sophmore girl asked him to dance but that many shoved him away. He says the girl said she hated Manny and wished he were dead but he’s sure the girl was just kidding.

Kat comes to see Lance. He promises not to tell anyone anything. Kat says she was raped at that party. She remembers being at the party and then woke up at home. She says she was a virgin and then there was blood. She decided not to call the police on her mother’s orders—if she didn’t know who did it, it was her fault. Lance says he has reason to believe that Manny had access to special K. She doesn’t think Manny would drug and rape her.

Bones tells Boothe that Manny didn’t ingest the drugs. He was simply had them. Boothe says that Manny was in possession of the date rape drug. Kat feels betrayed when the authorities get involved.

Finn tells Camille that he keeps comparing the bone injuries that Manny received. He blurts out that Michelle is in town and has been staying with him. Camille tells Finn that he’s in trouble with Michelle for breaking her trust. He thought he was doing the right thing. Camille says that they will arrange for Camille to find the two of them together, become outraged and then they can all move on from the situation.

Kat’s mother says she confronted Manny about him possibly being raped. The mother didn’t want her daughter to carry a stigma which is why she didn’t go to the police. Boothe thinks the mother may have taken the law into her own hands but she doesn’t necessarily have the strength to pull it off.

Kat is still upset with Lance. He shares that he was beaten while in foster care. He says someone helped him see that it wasn’t his fault and it was better to face what happened. Lance says he will do everything he can to help catch the person who raped her.

Michelle and Finn are kissing when Camille approaches her. Camille is upset that they went behind her back and Finn plays off the encounter.

Lance doesn’t believe Manny raped Kat. They look at the pictures again and follow Kat’s movements this time around. The pictures show someone giving Kat a spiked drink.

Michelle comes to see Camille. Camille says that loving someone is no excuse to lie but confesses to setting Michelle up because Finn blurted out the secret. Michelle doesn’t think they should have any secrets. Camille confesses that she is seeing her intern. The two hug it out.

Jack shows Bones and Angela how Manny was shoved in the suitcase. Boothe tracks down Nick who works for a moving company. He still insists he didn’t kill anyone but Bones finds the blood on a suitcase. They figure out that Nick raped Kat which caused Manny to attack him. Nick swears he didn’t want him to die. Bones, Boothe and Lance trick Nick into confessing to Kat’s rape and Manny’s murder.  Lance shares the news with Kat and her mother.