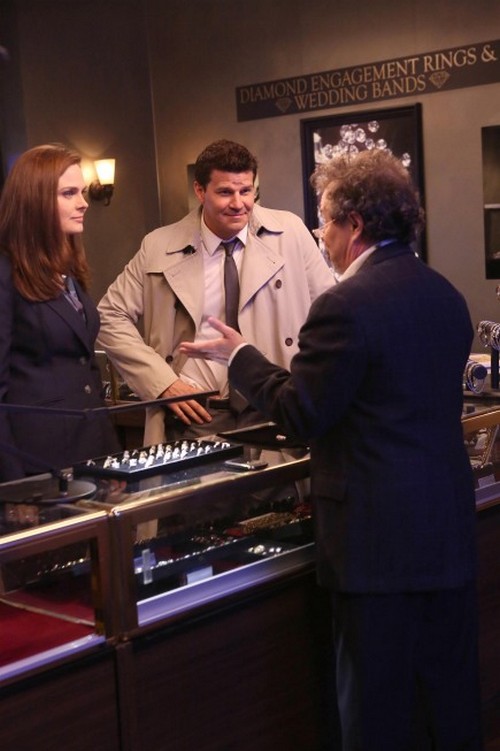 Tonight on FOX BONES returns with a whole new episode called, “The Blood from the Stones.” On tonight’s show Brennan is the subject of a documentary commissioned to raise funds for the Jeffersonian, and she struggles to be likeable on camera.  Did you watch last week’s episode?  We did and we recapped it for you HERE!

On last week’s show when the Jeffersonian team investigated the death of a former Marine sergeant whose remains were found burned to a crisp, they discovered that she was discharged after a fist fight with another Marine. When Booth and Sweets go to question the other Marine involved in the altercation, they learned that Deanna was obsessed with the idea of the apocalypse, which led the team to a following of doomsday preppers who became key suspects in her death. Meanwhile, Sweets thought he had landed his dream apartment but Brennan and Booth were not convinced that he will actually move

On tonight’s show an undercover police officer, who was investigating a string of ATM robberies, turns up dead in a van with a bag of diamonds found inside his mutilated body. So the Jeffersonian team must figure out whether or not the ATM robbers are also murderers, or if the cop was crooked. Meanwhile, Brennan is the subject of a documentary commissioned to raise funds for the Jeffersonian, and she struggles to be likeable on came.

Tonight’s Bones episode 20 is going to be exciting, and you won’t want to miss. So be sure to tune in for our live coverage of Bones — tonight at 9PM EST! While you wait for our recap, hit the comments and let us know how you are enjoying Season 8 of Bones?

Tonight’s episode begins with Booth and Brennan finding a dead body in the drivers seat of a car. It has melted into the seat due to a combination of hot and cold climate combining together. They find a sawed off shotgun. Upon autopsy they realize pretty quickly realize that this guy was a mule- stuffed with both drugs and diamonds.  The rocks were stolen and valued at $200 grand.  As the guy sits in room temperature his head begins transforming back into its normal state.

It’s taking quite a bit of work to figure out anything about this guy except for the fact that he has been tagged as an undercover cop, Detective Reuben Martin. He was closing in on two guys that were hitting up ATM’s.  Reuben’s boss says he hasn’t seen him in 6 days and that he was a good cop.  Booth goes to inform his wife and she seems to be pretty convinced that her husband’s boss had something to do with it, That he kept sending him in undercover and never had his back.

Every time Brennan works in the lab her work is being filmed for a special for the “Smithersonian”. Angela gets the video tapes from the ATM’s and attaches the two people to an isp address registered to the local college. Somehow they are able to narrow it down to two kids studying cyber-criminology.  They go to Paula and Marco’s college house and find Paula with her leg cut half off due to gangrene. She’s still alive but not coherent.

Booth refuses to let the EMT’s get her pain meds until she talks. She says Reuben robbed them and blew her foot off. Marco didn’t kill him but tried to get Paula’s bleeding to stop. Marco is apprehended by Reuben’s boss who is beating him up in a stairway until Booth intervenes. The boss is threatening Marco and telling him to keep his mouth shut. Marco tells him the whole plan. They stole money from ATM’s and gave it to Reuben so that they could then get the diamonds to smuggle to Columbia. Marco says they stole money but aren’t cop killers.

Tune in next week for more Bones.