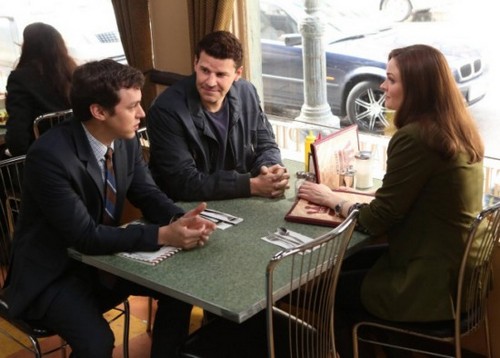 Tonight on FOX BONES returns with a whole new episode called, “The Doom in the Gloom.” On tonight’s show Sweets thinks he has landed his dream apartment but Brennan and Booth are not convinced that he will actually move out.  Did you watch last week’s episode?  We did and we recapped it for you HERE!

On last week’s show The Jeffersonian team investigated the death of Symchay Conteh, a young man whose remains were found in a barrel at a hazardous waste disposal facility. They discovered that the victim was an immigrant from Sierra Leone working numerous part-time jobs in order to make ends meet Meanwhile, as the team got deeper into the investigation, Cam and Arastoo (guest star Pej Vahdat) found it even more difficult to keep their relationship a secret and Brennan and Booth tried to decide on a vacation destination.

On tonight’s show When the Jeffersonian team investigates the death of a former Marine sergeant whose remains were found burned to a crisp, they discover that she was discharged after a fist fight with another Marine. When Booth and Sweets go to question the other Marine involved in the altercation, they learn that Deanna was obsessed with the idea of the apocalypse, which leads the team to a following of doomsday preppers who become key suspects in her death. Meanwhile, Sweets thinks he has landed his dream apartment but Brennan and Booth are not convinced that he will actually move

Tonight’s Bones episode 19 is going to be exciting, and you won’t want to miss. So be sure to tune in for our live coverage of Bones — tonight at 9PM EST! While you wait for our recap, hit the comments and let us know how you are enjoying Season 8 of Bones?

Scene begins in a kitchen with a body on the floor. A woman wakes up and feels blood on her neck. She then finds a gun in the silverware drawer. She walks cautiously over to the door and opens it. The explosion from outside the door sends her flying back into the room. Sweets and Booth are watching an old kung-fu film while Bones is handling the baby. Sweets gets a call about an apartment and mentions moving out. Booth gets a call about a murder and he and Bones leave. At the crime scene, there is a charred skeleton on the floor, Bones and Booth begin to examine it. Bones discovers that she was decapitated by a falling shelf from the apartment being burned and they find the skeleton’s head in the toilet.

Back at the lab, they’re examining the charred skeleton. Daisy is questioning Bones about Sweets possibly moving out of their house. The victim had previously been shot prior to waking up before being blown up. Bones and Booth are out to eat discussing Sweet and his moving out. Sweet joins them somewhat awkwardly as they ask him about the apartment that he went to check out. Sweet informs them of a Marine that the victim had relations with then leaves. Hodgins proves that the victim was shot by an incendiary backed round that killed her as well as starting the fire. Booth and Bones question the Marine woman about the victim who she had been in a fight with that got her into a lot of trouble and kicked out of the Marines. Booth and Sweets let her know that they will need to inspect her shotgun and that they knew about the 8 phone calls to the victim from her with the intention of trying to make up for what had happened to them while they were in the Marines. Bones discovers that the victim had at one point been shot by a cannonball in her leg.

Back in the lab they discover that the victim had a cannonball mold and possibly shot herself with one. Angela matches the dent in the victim’s leg to the size of the cannonball mold. Booth and Sweets discuss the cannonball development and the victim. Sweets receives a phone call about acquiring renter’s insurance. Booth offers to help Sweets move and is inquiring about his new apartment and the condition of it. Daisy and Bones continue to examine the victim to discover that she had syphilis. Angela and Hodgins examine an actual cannon and prepare to fire it with the same size round that may have been used on the victim. Sweets and Booth investigate the doctor that was involved in making the cannonballs; possibly with the victim. They talk about getting a warrant to search said doctor’s home and land after discovering space for ammo and a military-grade bunker on the property. They are on the property with backup. They walk up to a trip-wire linked to an explosive device. They all move in further on the land to discover the door to the bunker. They breach the door with explosives and discover animals coming out from the bunker followed by the doctor and 3 others with him. They walk out with hands-up and all get down on their knees to surrender.

Sweets and Booth have the doctor in an interrogation room. They’re inquiring about his paranoia of the world-ending. They discover that the doctor had accidentally shot the victim with a cannonball and provided the treatment there on the spot. The doctor has also been treating himself for an unknown venereal disease. Hodgins and Bones go over the inventory list of the doctor’s bunker which includes quite a few weapons. Hodgins links phosphorus and magnesium on the inventory and the both of them being on the victim when she was killed. Sweets and Booth go over the list of people in the group with the doctor for suspects. Angela and Hodgins are going over the evidence from the explosion and discover that the fire started later than was initially stated and removes the doctor’s group from the suspect list.

Back at the lab again, Sweets and Daisy are going over the Marine suspect’s story again since the doctor’s group is off the list. The condition of the burned bones combined with the temperature of the fire confirms the different time of death than was initially stated. Daisy begins to compliment Sweets on how he has handled himself during a tough time and they both admit they like each other. Sweets goes to re-examine the bunker and Daisy discovers a puncture wound on the victim’s clavicle from a large syringe. Hodgins and Angela are going over the details of escaping the bunker that might indicate  a way for the murderer being able to leave and return in time to keep a solid alibi. Cam and Bones go over the bunker inventory again for veterinary drugs that the doctor used on himself and was also used on the victim to knock her out indicating that the murderer has to be one of the doctor’s associates. Angela and Hodgins go over a virtual model of the bunker after Angela found a hatch to get out of but not back inside. Bones thinks he knows how the victim was killed and gets Hodgins interested over the a video phone call. Bones and Hodgins are in the lab going over the tools for a booby trap on a tray.

Whoever killed the victim set up a booby trap to kill her while they were away so they could not be a suspect as they have a valid alibi. Hodgins confirms that the booby trap on the door that killed the victim would definitely work to kill her in the manner intended. Bones is questioning one of the people in the doctor’s  bunker group about who may be the killer. The man accuses a woman names Dolores who is in the group as the killer because she had residue on her hands from placing the booby trap. Bones and Booth inspect Dolores’ hands to see if the is the killer.

Bones puts a light up to Dolores’ fingernails and her fingernails spark from a low ignition point material which implicates her as the murderer. Dolores claims she did it because she didn’t want her around because she was a danger to her and her husband. Angela speaks with the Marine that was questioned before about the victim and shows her a letter from the victim. Angela puts a positive tone on the letter for her to begin reading and walks away as she reads it alone and begins to cry because the victim still loved her. Bones and Booth are back at home talking about being prepared for the end of the world. Sweets is moving out the last of his things and thanks them for having him over over a toast. They say to Sweets that they enjoyed having him and wish him luck with his new place. Sweet’s new roommates come in their home to help him move and Bones and Booth see that it is two younger, cute chicks. They continue talking about preparing for the end of the world as the scene fades away.