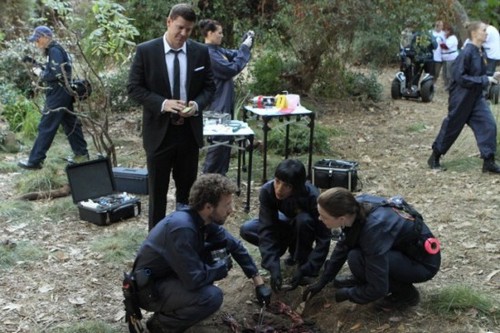 Tonight on FOX BONES returns with a whole new episode called, “The Twist in the Plot.”   On tonight’s show with the case’s spotlight on end-of-life plans, Brennan and Booth start discussing their individual choices for after-death arrangements..  Did you watch last week’s show?  We did and we recapped it for you HERE!

On last week’s show after Hodgins and Angela were drugged and woke up to a bloody corpse hanging in the canopy of their bed and flower petals around their son Michael’s crib, they were forced to believe that Pelant was back for revenge against Hodgins. Although Hodgins wanted to go after Pelant directly, Booth knews it was best to work within the system and not go against protocol. Meanwhile, as the Jeffersonian team investigated the corpse, they discovered the victim was a Special Forces agent working for the world’s biggest supplier of mercenaries, and Angela and Hodgins decided to start an investigation without the rest of the Jeffersonian team for the sake of their family.

On tonight’s show the Jeffersonian team investigates the remains of two bodies that were found at the same burial plot: one of a female cancer patient; the other, the cancer patient’s “doula,” who was guiding her through her grieving process with the illness. Meanwhile, with the case’s spotlight on end-of-life plans, Brennan and Booth start discussing their individual choices for after-death arrangements. Also, Daisy Wick (guest star Carla Gallo) returns for her first case after her break-up with Sweets.

Tonight’s Bones episode 10 is going to be exciting, and you won’t want to miss. So be sure to tune in for our live coverage of Bones — tonight at 8PM EST! While you wait for our recap, hit the comments and let us know how you are enjoying Season 8 of Bones? Check out a Sneak peek video of tonight’s episode below!

Tonight’s show begins with two middle aged nerds on scooters riding through the park. The woman goes off the trail and face plants then shrieks and says her face is burning. It should as it’s covered in road beetles. As her friend pulls her up we see that she landed on…wait for it- BONES! A skull apparently belonging to a female. There’s another body beneath her too.

Apparently there is a service that buries people in the park. The dead woman was Monica Craig, a 33-year old cancer victim who wanted to be buried there. The body beneath her is still a mystery though. It doesn’t take much footwork to find out that the woman buried beneath Monica is her death doula- the woman who helped her to prepare to die. Green Passages is the name of the company that she worked for and Booth and Brennan go to check it out. Once there they hear about how loved she was by her coworkers and patients.

They walk away with little info and move on to a guy who was an almost business partner. He says they had a deal and she reneged. He wanted to kill her, but only in court. He also clues them in to the fact that Rachel was sleeping with the coworker who seemed shocked by her death. They back track to have another chat with him and he claims that they had broken up a year before. Booth isn’t buying his innocence but Brennan seems to be.

Meanwhile it’s revealed that Monica didn’t die of cancer. In fact she had several months left to live so now need to know who actually killed her and why.  Lance goes and talks to Monica’s husband again and he paints a lousy picture of Rachel’s fling. I’m not sure if Lance believes him but I’m not buying it. As it turns out, Monica killed herself with her husbands help. Well, he provided the meds to allow her to kill herself and then didn’t stop her.

The problem is that Monica’s husband cheated with Rachel and their affair ended two days before Monica killed herself. He says Rachel showed up to plant a tree at the burial site and he clobbered her with Monica’s headstone. He couldn’t lose another person.