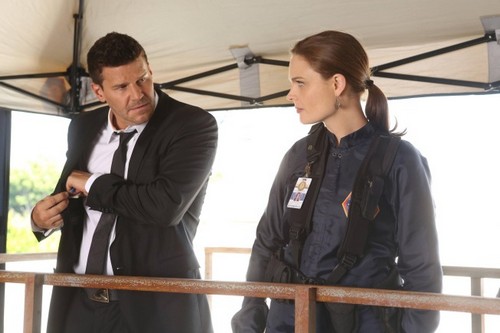 Tonight on FOX BONES returns with a whole new episode called, “The Secrets in the Proposal.” On tonight’s show Brennan must decide whether to have faith in Booth or to end her relationship with him.  Did you watch last week’s episode?  We did and we recapped it for you HERE!

At the end of season 8 when evil tech genius Christopher Pelant returns to toy with the Jeffersonian team in their newest investigation, they discovered that the string of murders that have been occurring are tied to FBI agents close to Booth. Meanwhile, as the investigation unfolded, Sweets realized that the evidence seems all too familiar to him and Brennan starts evaluating her relationship with Booth when signs began to point to him as a potential target of Pelant’s.

On tonight’s premiere episode In the season premiere of BONES, the Jeffersonian team investigates the murder of Jason Siedel, an accountant for the state department, whose remains were found in a hotel air conditioning unit. When Booth finds his old army buddy and CIA agent, Danny Beck (guest star Freddie Prinze, Jr.), clearing away evidence at the victim’s condo, he begins to realize that Siedel’s murder could yield more suspects than the team had anticipated. Booth also seeks out Aldo Clemens (guest star Mather Zickel), his friend and an ex-priest from their military days together, to get advice on his relationship with Brennan, now that Pelant has put a wedge between them. Meanwhile, Brennan must decide whether to have faith in Booth or to end her relationship with him.

Tonight’s Bones season premiere is going to be exciting, and you won’t want to miss. So be sure to tune in for our live coverage of Bones — tonight at 9PM EST! While you wait for our recap, check out the sneak peek of tonight’s episode below!

Bones is back for a whole new season and yet the trouble that begin with the last has yet to be resolved. Picking up directly from when that ended. Booth is still feeling bad for himself and has gone to find peace with old friend Aldo Clemens. He admits to Aldo that he lied to Bones but before he could fully get into he needs Aldo to find a place where nothing electrical transmitted. Aldo thinks he’s being weird until Booth is completely serious.

They go into the bar’s freezer. It’s there that Booth tells is friend all about Pelant. Pelant had told Booth if he married Bones then he would kill 5 people. That’s why he suddenly got cold feet. Well Aldo doesn’t get why Booth won’t let Bones in on Pelant’s threats. Booth can’t. Apparently Bones has the worst poker face. So for now Booth is keeping everything Pelant to himself.

Which harder than he thought it would be. For one it isn’t as if their whole team hasn’t been a part of the Booth/Bones love story. Everyone has something to say and they’re not afraid to hide it.

Booth shows up for the newest crime scene. Grizzly and bloody but yet again the focus isn’t on work. Bones wants to know why she couldn’t reach him earlier. It seems she tried to call and only got voicemail. He lies and says he was busy with work. He probably could have pulled it off if Caroline hadn’t pointed out earlier that he smelled like brandy. But Bones wasn’t trying to reach him for work or herself; Christine had wanted to talk to him. That’s got to hurt.

Booth does his best to reassure Bones he still loves her but how is that going to work when she know he’s lying to her and staying out all night elsewhere. She doesn’t even want to closely work with him anymore. She tells him to take Sweets on his investigation. The very same investigation no one has been paying attention so far. The victim’s name was Jonas.

After reaming him out for her friend, Angela decides to be helpful by handing over a possible suspect. Unfortunately their only suspect can’t talk under the advise her lawyer/ mother. Her mother is a rather big shot. Why? Because no can get pass her to her client.

Booth invited Bones out afterwards. Most likely so he could feel better from such crappy start. But the distance is there between them. Plus it hurt his case when Angela got to Bones first. Even as they talk about Christine. Booth can hear it her voice that she feels he’s checked out already. He wants to explain until he notices that they’re surrounded by transmitters. He can’t tell her the truth.

She’s pulling away just when he needs her. Especially for his investigation. Sweets is a good guy and all but he doesn’t give the same insight as Bones does. It probably wouldn’t have mattered anyway. Sweets got knocked out before they full check over their victim’s apartment. Booth had given chance only to realize what a waste of time that would be. The guy that knocked out Sweets is none other than Danny Beck.

The CIA won’t stop their investigation but they’re sure not going to help. Jonas was an operative. Bones and Daisy found out that their operative had survived a bomb. They have to eliminate injuries to find out which was most recent. The bomb confirmation explains several bents in his bone leading them to determine the cause of death. The cause of death turned out to be two blows to the head. Now why would anyone conk him out and then throw out the window into a propeller. Angela and Jack may know why. They picked up some photos from the printer the victim last used and found photos of separate male and woman in the hotel suite. Their victim may have walked in on someone’s fun time.

The whole situation was a sting. Jonas was blackmailing a Chairman in order to gain Intel in China. But one little problem ran into his way. The woman he was using. The same girl from earlier she thought he died because of they were trying to do. Once Booth informs her otherwise thanks to his deduction from Danny’s reappearance, the girl was willing to throw the real suspect right under the bus. Her mother.

Her mother was suspicious of her activities and followed her one day. When she saw the meeting between her daughter and Jonas, she thought Jonas was a pimp. That’s why she assaulted him but it did not lead to his death.

It wasn’t Lily or her mother that killed Jonas. It was her boss. The one that has been secretly in love with her.

Bones has been asking around about other people’s relationships before she thought to trace where Booth has been going to every night. She thought it was a strip bar when it simply a bar. Run by Aldo. He doesn’t tell her but he does reassure Bones that Booth does love her. All she needs is some faith.

Booth returned home and Bones is there for once without the sad and withdrawn look on her face. She’s willing to trust him but next time he has to propose. Their entire reunion was caught by an ominous transmitter.