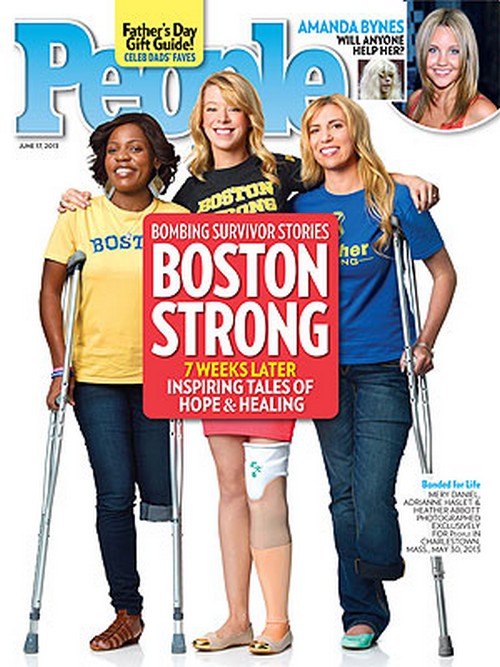 The survivors of the Boston Marathon bombings are featured on the cover of the latest issue of People magazine. Inside of this week’s publication, the survivors tell their stories of pain, suffering, bravery and survival.

The survivors formed bonds with each other over the same brutal tragedy that claimed their limbs and everyday lives. It’s a close bond over tragedy that none of us wish to go through, but we do support them in their recoveries.

Survivor Adrianne Haslet said upon standing on her prosthetic leg for the first time, “I started crying. I hadn’t even taken a step yet. Just to stand tall was extremely emotional.”

Sixteen people had lost limbs on that day and as many as 264 total were left injured. Adrianne said that everyday tasks like taking a shower and going to the bathroom “take double the time.”

Among the most grievously hurt were Marc Fucarile, 34, of Stoneham, Mass., and Roseann Sdoia, 45, of Boston, seen here in exclusive PEOPLE videos.

Stranded when the last available ambulances raced past them, the pair were thrown in the back of a police van to be rushed to the hospital.

As the vehicle hurtled through the streets of Boston, Fucarile, whose right leg was blown off, drifted in and out of consciousness. “I thought I was going to die,” says the father of a son, Gavin, 5.

But with soothing words, Sdoia, who also lost a leg, kept him awake and pushed him to fight for life.

Now Fucarile and his fiancé Jennifer Regan, 30, are looking forward to planning their wedding again.

“I definitely want to be able to dance,” says Fucarile.

Such bravery! We are glad that things didn’t turn out worse for these victims and their families.