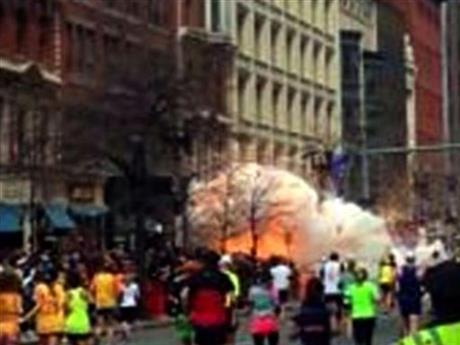 We all received the devastating of the bombs going off at the finish line of the Boston Marathon, and the entire city seems to be in high alert after the police issued a lockdown. Right now, the whole country’s thoughts and prayers are with the people who live in Boston. Several celebrities have responded to the tragedy, with most of them offering their condolences and some of them sending their prayers to the people of the city.

New Kids on the Block Joey McIntyre was actually scheduled to appear in the race, and he tweeted that he did manage to finish the race before any of the explosions went off. He tweeted, “There was an explosion by the finish line about 5 minutes after I finished. I’m ok but I’m sure there are many hurt.” It seemed that not everyone knew that he was ok, because Donnie Wahlberg just tweeted, “Just heard that @joeymcintyre is ok! Thanks to everyone for tweeting! Scared for everyone else in Boston. #PrayerForBoston please.”

Larry King tweeted, “My thoughts are with those injured in Boston. Details are sill coming in, but we need to not jump to conclusions without all the facts.” Sophia Bush added, “I hope everyone in Boston is okay…” and Lea Michelle also tweeted similar sentiments, saying, “Sending my thoughts and prayers to everyone in Boston right now….”

Of course, they weren’t the only ones. Eva Longoria took to Twitter to post, “God be with the injured people! RT “@CNN: There has been at least one explosion near the Boston Marathon finish line http…”

Chris Evans, who is from Boston, tweeted, “Thoughts and prayers are with everybody in boston. heartbreaking…” Alyssa Milano also added, “My love and strength go out to all those affected by the explosions! #BostonMarathon2013.”

Others didn’t take it so safe, adding in a lot of profanity. Olivia Wilde tweeted, “Oh for f*cks sake. I’m so disturbed by the reports from Boston. This is horrible.”

Anderson Cooper has just tweeted that he will be in Boston for tonight’s telecast, so hopefully we’ll know more about what caused this by then. Right now, we know that the explosions were definitely a result of bombs, and police have been finding secondary devices in the area since then. The city is temporarily in lockdown, and everyone has been told to go home and stay behind closed doors. The latest update on the story coming in from NBC is that a small homemade bomb is the preliminary cause of the explosion at Boston Marathon, and it’s been confirmed at 2 dead and 23 injured per the Boston Police department.