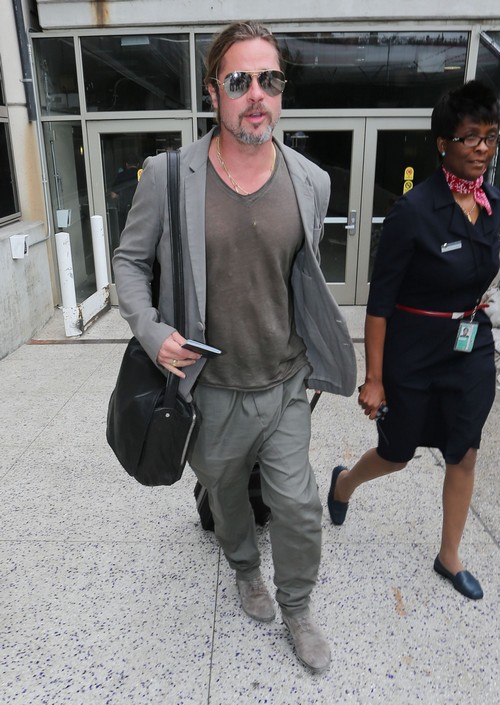 According to the Sun, Brad Pitt is planning to move his entire family to the UK at the end of this year so that he can shoot the sequel to World War Z, which was greenlit based on the success of the first film this summer.

They stayed in a private Wentworth Estate around Surrey last year, and they are reportedly looking at similar properties for the next year. A source tells the Sun, “Brad and Angelina are already planning for next year and have put the feelers out for properties. They would like to stay in Surrey like last time. Their kids are home-schooled so it won’t cause much disruption.”

Of course, Brad is also shooting the World War II period drama ‘Fury’ in England later this year as well, so he’ll be spending a solid year there if everything goes according to plan. I can already hear the British press gearing up, considering the tabloids there absolutely LOVE Brad and Angelina.

I am starting to feel a little sorry for their children though. Yes, they’re getting to travel and explore and learn about new places, and it’s probably exciting for young children to be able to do that. But the kids are starting to become teenagers, and if there’s one thing I can say from experience, it’s that it sucks to keep making new friends every time you move. Maybe the Brange children will sidestep that since they already have some friends in England, but it’s still difficult to keep moving. I hope Brad and Angelina keep that in mind as the kids get older.