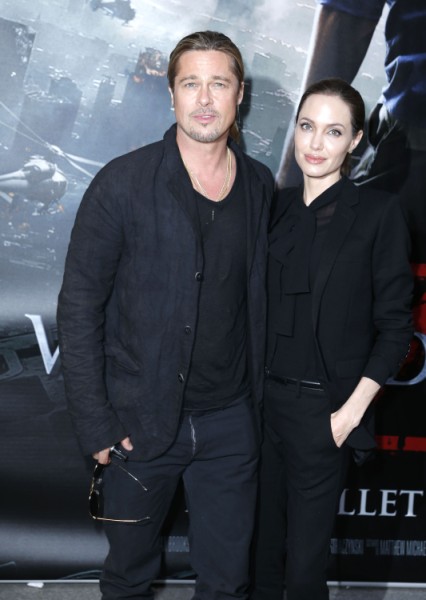 For awhile there we couldn’t go a day without a new interview from one of these two. The Pitt/Jolie PR circus was on display to save World War Z. And it did – barely. Experts says the movie should break even, which considering some other massive big budget disappointments this summer, isn’t half bad. But then… crickets. Brad Pitt and Angelina Jolie went back into their hidey holes. Perhaps they’re just too busy planning their wedding on a cruise? Angelina Jolie is supposedly so enamored by Maddox Jolie-Pitt’s idea to get married on the high seas that she’s moving full speed ahead with the planning.

According to The Sun, the couple wants to get married aboard the Hebridean Princess which sails around Scotland. Apparently it’s a bit hit with the royals and Queen Elizabeth chartered it a few years ago for her birthday. So it’s not a totally tacky idea but it’s kinda royal tacky. I’d stick with the French chateau. It’s totally Halle Berry right now but at least there would be plenty of wine in stock.

Speaking of royal tacky, do you remember all the stories last summer regarding Angie’s OBSESSION with Kate Middleton during the Olympics? I wonder if that has anything to do with this last-minute change.  The source said the kids are hooked on British voyages (because who isn’t??) but I bet there’s some Kate envy still hidden in there. Can you imagine if Angie and Kate were pregnant at the same time? Kate wasted Kim Kardashian on the respectable pregnancy factor but Angie would have put up a good fight. That would have truly been a media showdown for the ages.

So what do you think? Will the Brad Pitt/Angelina wedding take place on the high seas a la Jack and Rose? Also, I’ve attached some pics of Brad flying out of LAX today. The chub is still there. Do you think Jesse The Body Ventura is upset Brad’s hell bent on stealing his look?