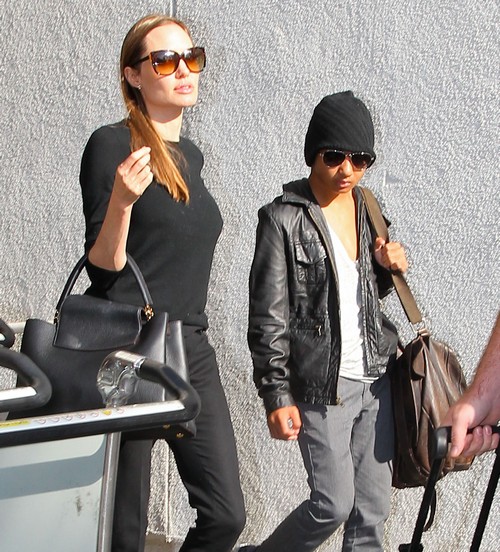 It is believed that the Jolie-Pitt people built the Easter Island heads, travelled to the present and decided to take over the world with Angelina Jolie’s legs and Brad Pitt’s V-thingy in his shirtless Fight Club role.

Unfortunately, they got side-tracked and started collecting babies like a sad hoarder collects Forest Whitaker films and cat skeletons.

And now look at what they’ve done!

Maddox Jolie-Pitt, the first one to be collected, is about to hit the big screen!

The 13-year-old tribe child might become a hot, young Hollywoodian very soon. Radar Online reports that Maddox is “a strong candidate to play Battling Boy, a Paul Pope-created character whose exploits could be headed to the silver screen.”

A source reveals, “Maddox would be amazing in the part, but Brad is wary of going ‘all Will Smith with his kids’. This could be a special case though, because Brad got involved in the project so early that his influence – and Maddox’s – are really felt across the board on this thing. There are panels that even use some signature Maddox facial expressions!”

Brad Pitt’s production company, Plan B, bought the rights to the character a while ago. Allegedly, Will Smith’s kids and their super success made the Jolie-Pitt people hungry for fame.

“This is the next movie Brad wants to produce and he even has financing lined up from his deal with India’s Reliance to make this thing. Maddox could be playing the part within 10 months or less.”

In 2011, insiders denied Maddox’s involvement in the production, but two years and After Earth have passed since then. The science fiction conundrum cemented Jaden Smith as an upcoming star, even though the film failed so miserably that not even Bette Midler could touch it with a ten-foot drag club pole.

Maddox is cooler than Nicole Kidman’s face, so he might be right for his first Hollywood role!