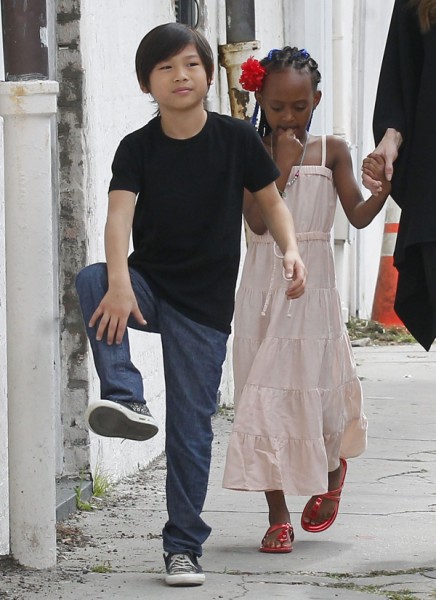 I’m not quite sure if this is disturbing or not so let’s talk it out and see what we come up with.

Brad Pitt and Angelina Jolie have been in Turks and Caicos with practically their whole family and an army of nannies and more news seems to be filtering out to us. No, we don’t know if they got married on Christmas yet (though I tend to think they did) but we are hearing the ups and downs of being a little tyke in the Jolie-Pitt universe.

Brad’s niece, Josie Neal, has been tweeting all about it! She’s managed to get news to the outside by tweeting about how Knox is scared of water and how Shiloh crashed an all boys treasure hunt (cue the gender confusion talk people), oh and how Pax Jolie-Pitt told the whole family on Christmas Eve, “Santa is dead to me.” How’s that? Say what now?

This kid is nine. Is that a respectable age to find out Santa isn’t real? I thought that usually happened a little older but I can’t be sure. Is Pax just crusty because someone spilled the beans or is Angelina’s wild/dark past rubbing off on him? Doesn’t she buy him knives or something like that? Maybe the kid is getting the teenage grumpies a little early? I’m not sure but that seems weird, right? Those words are a little intense for a nine-year-old.

Is Pax Jolie-Pitt going to be the kid with the attitude problem? Everyone kinda pegged Zahara for that but maybe her eye cuts to the paparazzi are all bluster. Hopefully he’ll learn to transfer his anger rightly to his parents instead of Santa Claus though. Santa doesn’t deserve the hate.

What do you think of Brad Pitt and Angelina Jolie’s son’s behavior?  Pax Jolie-Pitt hates Santa Claus! This isn’t too alarming. There are worse things, right? Right?

Side note: I’m liking this Josie Neal. Who needs paparazzi when she’s around?