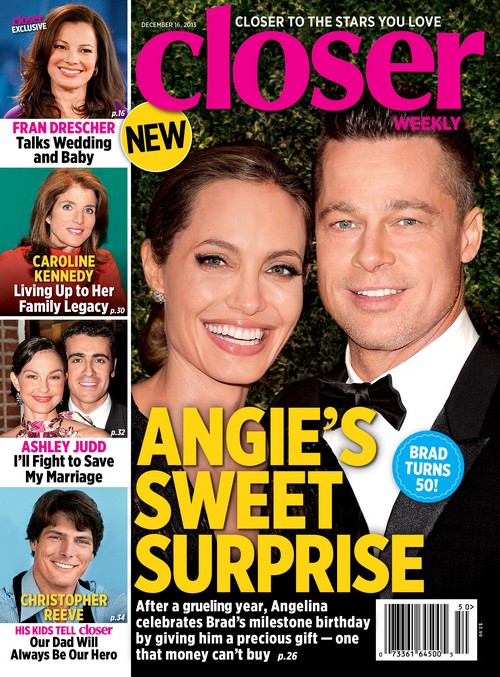 Angelina Jolie and Brad Pitt are about to celebrate Brad’s fiftieth birthday and when looking at the extravagance of some of their past gifts, you can bet that Angie’s gift to Brad this time will be momentous. Will it be an island? Will it be the chance for Brad to build his own skyscraper? Whatever it is, it will be epic. But according to Closer Weekly’s cover issue, this ‘precious‘ gift will also be something that ‘money can’t buy‘. Is anyone getting Lord of the Rings vibes from this report, especially with the whole ‘precious’ bit?

It’s definitely a big milestone, and I’m guessing the reports are all hinting towards another baby. Will the Brange adopt yet another child for Brad’s fiftieth? Or will they get pregnant again? What else would be so precious that they don’t already have and that money can’t buy? Although if you were to get real technical about it, money would also be involved.

This week’s Closer issue also has an interview with Fran Drescher, who discusses her baby and wedding. Then, there’s a story on Caroline Kennedy, and her attempts to live up to her family’s legacy.

There’s also a nostalgic feature on Christopher Reeve, whose his kids tell Closer that their dad will ‘always be their hero‘. Awww.

Also, Ashley Judd and Dario Franchitti have been having marital problems, but have yet to file for a divorce. According to Closer, Ashley claims that she will continue fighting for her marriage against all the odds, and won’t give up. Her commitment should be applauded, especially since too many people in Hollywood give up on their marriages way too easily.