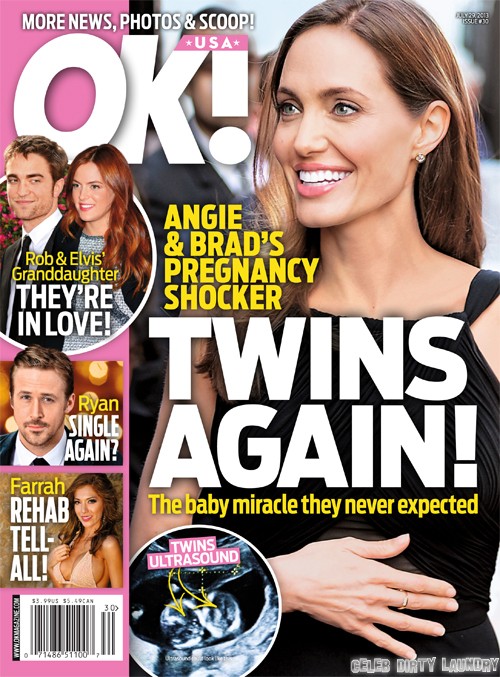 According to this week’s cover of OK Magazine Angelina Jolie is pregnant with twins. This is the second cover in a matter of weeks where the magazine features a story on Angelina and Brad Pitt becoming parents again.There is even an ultrasound on the cover, which I have no doubt is completely fake.

The rumors that Brad and Angie are going to expand their family again have been running ramped ever since her double mastectomy news was revealed. Granted there is no actual proof that she is knocked up again, let alone that it is with twins. The OK cover photo shows Angie smiling with her hand on what could possibly be a pregnant belly. That my friends is not proof, the picture could be doctored or it could very well be an old picture. Besides if you look closely there only seems to be the allusion that a baby bump is present, ridiculous.

Let’s be real here, the cover is laughable at best. It is a pathetic attempt at trying to generate a story that will boost sales. I will give OK credit though, at the least they are consistent. As I said, a couple of weeks ago the cover was all about Angie and Brad’s summer wedding and winter baby. Not that it is out of the realm of possibility that these two could have more kids but I just don’t buy this story.  Besides Angie pregnancy rumors seem like an easy headline to create, if you recall last winter the same rumor circulated for months.

If Angie is indeed preggers, which I seriously doubt, she certainly won’t be lacking for help with the babies. Between the six kids they already have and slew of nannies on hand, there are more then enough hands on deck to help.

Do you think Angelina Jolie is really pregnant or is this just another ghastly rumor? Tell us what you think in the below comments section.