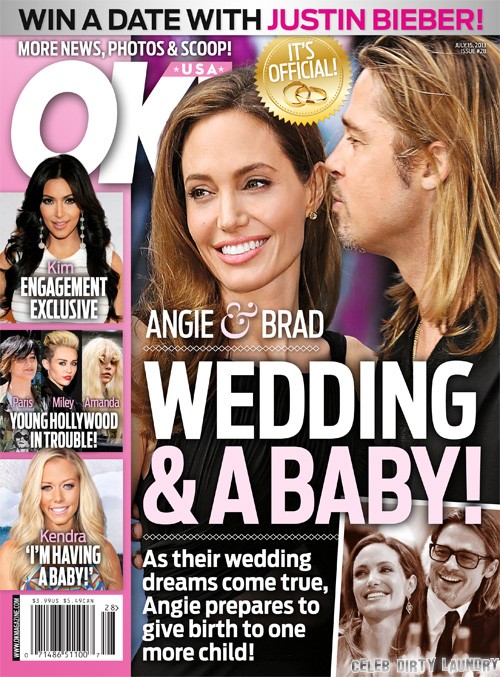 According to the latest cover from OK! Magazine, Brad Pitt and Angelina Jolie are finally on their way to marriage and another baby. The report says, “As their wedding dreams come true, Angie prepares to give birth to another child.”

Could Angelina be pregnant again? There have been several reports over the last few months about both Brad and Angie wanting another child since their youngest have now turned four. Goodness knows, they have enough nannies to take care of a village if they want to.

There’s also the fact that a wedding has been on the table for the past couple of months, and Brad and Angelina have supposedly ‘confirmed’ the date for later this summer. Could this be the Brangelina wedding that we’ve all been waiting for? I can only imagine the tabloid and paparazzi frenzy leading up to their wedding ceremony, so I can’t even comprehend what will happen if they were to combine that with news that Angelina’s expecting again.

OK!’s cover also has exclusives on several other news items. Kendra Wilkinson’s having another baby. Young Hollywood is in trouble, including perennial favorites Miley Cyrus, Paris Jackson, and Amanda Bynes.

And finally, OK! also claims to have an exclusive on Kim Kardashian’s engagement. In addition to getting news about Angelina and Brad, could we also be getting news on Kim’s upcoming nuptials to Kanye West? I never thought he would propose, but hey – if the Kardashians have managed to build this entire business empire on the basis of Kim’s sex tape, I believe that they can do anything they put their minds to, including somehow coercing Kanye to propose to Kim.

What do you guys think of the Brad and Angelina’s wedding, Kendra Wilkinson having a baby, young Hollywood in trouble, and Kim Kardashian’s rumored engagement to Kanye West? Let us know in the comments.