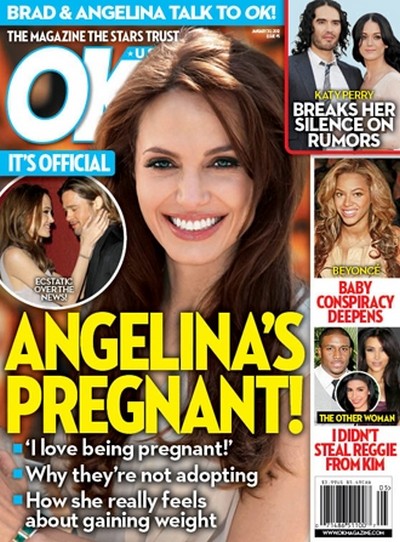 The current issue of OK! Magazine has the bombshell story ‘Angelina’s Jolie Is Pregnant.’  The magazine claims that it’s official and Angelina Jolie and Brad Pitt who recently became engaged are adding to their family.  This would be child number seven for Angelina and Brad.  The magazine has all the details on how Angie loves being pregnant, why they are not adopting and how she really feels about gaining weight.

A source close to the Oscar-winner reveals that Angelina is expecting her seventh child and telling friends she can’t wait to be a mom again.  “She’s almost three months along,” the source confirms to OK!. “It’s not something she wants to officially announce but she’s at a point where she is telling a select group of people.” Adds an insider: Angelina is really savoring every moment. she’s having a tough time with morning sickness but says it’s all worth it.”

Both Brad and Angelina have been dropping hints that they would like another child and many speculated that they would adopt again.  However, rumor has it Angie loves being pregnant, she feels more womanly then she ever has when she is pregnant.  So what do you think is Angelina pregnant or is this just groundless speculation by OK! to sell magazines?  OK! does say at the top of the cover that they have spoken to Brad and Angie, so you never know!  Hit the comments and let us know your thoughts.

Can you imagine if Angelina is pregnant what this news will do to Jennifer Aniston?  First Angelina steals her husband, gets engaged to him and gives him child after child.  Add to all this there have been rumors that Jennifer and Justin Theroux’s romance is dunzo.  Word on the Hollywood street is that Jennifer Aniston is clingy, demanding and that she has been suffocating Justin.   Poor Justin just imagine how clingy Jennifer is going to get when she hears this news.

So is Angelina Jolie pregnant and expecting baby number seven?  Hit the comments and let us know what you think about all this!