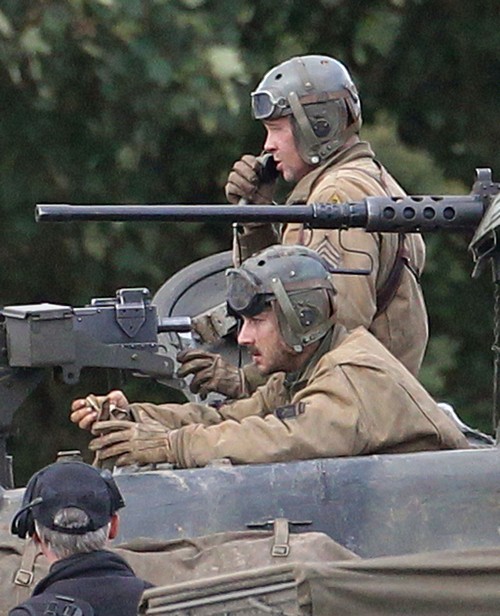 It’s almost weirdly refreshing to see that the tabloids are spending so much time and effort concentrating on made-up fighting between male celebrities instead of focusing all their energy on made-up fights between female actresses.

According to Radar Online, Brad Pitt and Shia LaBeouf are in the midst of a passive-aggressive tug and war because of Shia’s unconventional filming methods on the set of WWII drama Fury. A source explains, “Brad and Shia haven’t formed a tight friendship during the making of Fury. They have very different styles of working and it’s not mixing well on a personal level, which is tough because Brad and Shia met many years ago and wanted to work together. Brad is impressed by the performance Shia is turning in, but it’s not helping their friendship for Brad to see how much torture Shia puts himself through to get results. Brad is a laid back guy who works completely differently from this kid.”

You know, I wouldn’t be surprised to find out that this is true. Shia’s method acting has drawn criticism in the past, and Mia Wasikowska even revealed that Shia scared her so much on the set of Lawless that she almost quit. Now, Brad’s been working in Hollywood for close to twenty years and he’s probably dealt with method actors before – but that being said, I agree that he probably won’t be grabbing a beer with Shia in between takes.

There are also several others actors on this film set that are rarely mentioned, and it would be interesting to see their response to this rumored clash between Shia and Brad. Are they method actors too, or are they chilled out like Brad? Do they all just huddle together and stay away from Shia? It’s so fascinating, especially because Shia’s done films like Transformers where it would be physically impossible to remain in character all the time. I guess this whole method actor thing started when he became a ‘serious’ actor, so let’s see if it stays that way or if he eventually grows out of it.