Bradley Cooper And Zoe Saldana Split Before Christmas Holidays – Are We Surprised? 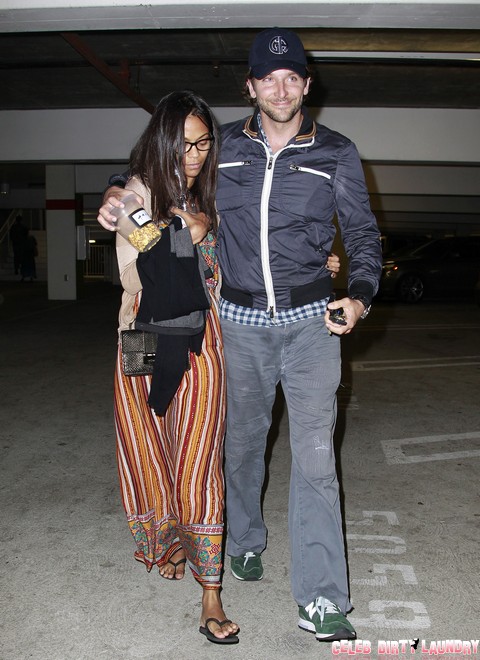 Bradley Cooper and Zoe Saldana are no more. Are you surprised? We aren’t. We knew their reconciliation was over before it began. Their Patsy Cline press footage fooled no-one! According to them, they split again because of being too busy with their careers. Now, if you look to your left, you’ll see a steaming pile of B.S. played in by a toddler with poop pants. A source for the New York Post said, “Zoe had planned to spend the holidays with Bradley and his family in Europe. They all were going to Paris, but things didn’t work out between them. Zoe spent New Year’s Eve with friends in Miami.”

Cooper and Saldana have both been plagued by rumours of their sexuality – he has been called gay longer than Westside Story’s history on Broadway, while she has been dipped into the pond of bisexuality. We don’t know what their sexual orientations are, nor do we even care, but we do know that their relationship screams “smoke and mirrors”. The source continues, “If Zoe was upset over the split with Bradley, she didn’t show it.” Obviously she wasn’t upset over him! They’re just an arranged couple with arranged careers. They’re owned by the public and film studios and greedy agents and lusty PR people. It’s all a game of who draws the biggest bucks. (Rock Hudson, anyone? Anyone?)

The two dated for three months in early 2012, split up, and went at it again in September. Interesting to note, they “met” on the set of The Words and became a couple during the promotion of the film. Also, if you’ve been out of the loop, Silver Linings Playbook – Cooper’s latest film – received widespread critical acclaim and could be in the running for an Academy Award or three. Could it be coincidence that these two reconcile whenever a new film project comes out, and then break up when the film project fizzles away into post-marketing hype? No. It can’t be coincidence. There’s a reason behind everything in Hollywood.

According to IMDB, Cooper is currently busy with principal photography for The Hangover 3. Expect a release date- and a Saldana/Cooper date – later this year.