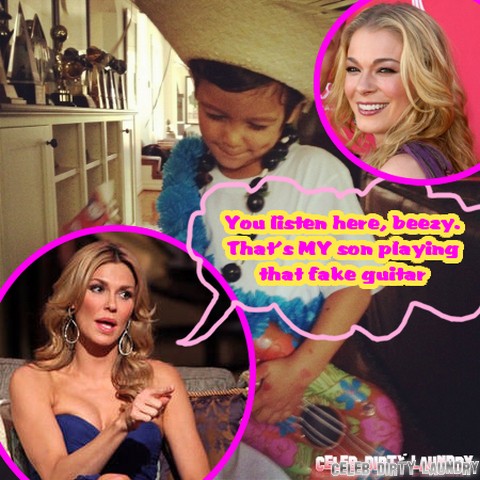 According to an exclusive from In Touch Weekly, Brandi Glanville and her children will be played by actors in LeAnn Rimes and Eddie Cibrian‘s new reality show.

Well, that’s just weird. I guess their alternative was to not feature Brandi or her kids at all, but that’s better than using other people to play them. Apparently, their show is based on their lives, and will be ‘scripted’ but ‘based on reality’. I guess that’s why they feel they can use actors, and I suppose you can’t really tell Eddie and LeAnn’s story without Brandi Glanville and their children.

A source explains to In Touch, “They are going to have actors play Brandi and the kids’ characters in the show. LeAnn and Eddie were so against the kids being on RHOBH that they can’t have them in this.”

Hah, this is when being a hypocrite bites you in the ass. After all that complaining about how the kids should not be featured on the Real Housewives of Beverly Hills, there’s no way they can turn around and put the kids in a reality show. Forget the fact that Brandi would never allow it, it’s just funny that their own words and actions are coming back against them.

Also, if they really go through with this, won’t Brandi be able to sue them if they misrepresent her in any way? Technically, it would be slander or libel if they make their Brandi actress say anything that makes her look bad, and they have no way of proving that what happened was factual. Both Brandi and LeAnn have different accounts of what’s happened in the past, and of course, the version presented in LeAnn’s show will differ from Brandi’s version.

What do you guys think? Do you see a future lawsuit from Brandi? Let us know your thoughts in the comments.