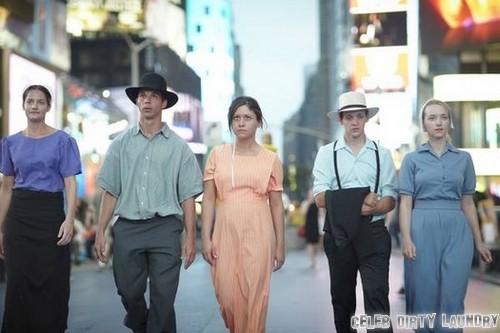 BREAKING AMISH: BRAVE NEW WORLD continues on TLC tonight with a new episode called, “Devil in a Red Dress.”  On tonight’s show Katie gets a makeover but her decision to ask Kate to go with her does not go over well.  Did you watch the last episode?  We did and we recapped it here for you!

Breaking Amish chronicles the lives of the cast, Jeremiah, Kate, Abe, Rebecca and Sabrina as they endure the realities of living in new surroundings and face new situations involving work, friendship, romance, and lifestyle. It also includes the drama that develops between cast members as they undergo various experiences.

On last week’s show a surprise modeling gig in Miami offered Kate an escape from the others, or so she thought. Katie Ann had a surprise of her own in store for Mary and a big decision about her future. Jeremiah discovered footage of Kate that leaves everyone in shock.

On tonight’s show Sparks fly when Katie Ann decides to get a makeover and picks Kate over Abe and Rebecca to go with her. Sabrina tries to find her long lost family, and herself, in Puerto Rico with Jeremiah along for the ride. And Abe finally goes bull riding.

Here is the Live Recap!

The group is still standing around watching the shocking video. What’s so shocking? It’s a video of Kate kissing another girl. Sabrina actually gets defensive for Kate. Jeremiah shows the video to Kate and tells her he wants join next time. The overall acceptance from the others does make Kate feel better. Even if she tries to shrug it off.

Jeremiah and Sabrina go to Puerto Rico. Jeremiah hates flying but he’s willing to do it for Sabrina. A choice he doesn’t regret once actually seeing the country. He jokes around about moving there.

Mary talks to Abe and Rebecca about Katie-Ann. Mary didn’t have a good experience with her own stay in the English world so she wants better for Katie-Ann. Not only is she giving Katie-Ann money but she wants Abe to look out for his sister as well. When Rebecca makes the same offer though; Mary isn’t as happy.

Sabrina goes to meet with the private investigator with Jeremiah at her side of course. The investigator warns her that the culture is different down there. Her aunt and cousins are going to want to embrace her and give her kisses. Things that Sabrina isn’t used to.

Katie-Ann wants some new clothes. Abe and Rebecca offers to take her shopping but Katie wants Kate’s advice. Rebecca begins trashing Kate’s style before stomping off upset. Abe isn’t as offended. He doesn’t believe Kate would be a good influence but he knows he can’t stop Katie-Ann.

Kate is hanging out her friend from earlier. She denies they were flirting later on but had referred that night as a date. Their “date” included going out to a gay club where they possible made out.

Abe finally gets on a bull. Rebecca is scared out of her mind watching. Surprisingly, Abe makes it out ok but he decides that it wouldn’t be a great career move for a family plan. Meanwhile Katie-Ann who also witnesses his bull riding is feeling envious.

Katie-Ann does go to Kate for fashion tips. Kate gives her spa day. It’s the first time Katie-Ann has ever cut her hair. She had make-up put on by a professional. She just wants to experience it all.

Sabrina goes to meet her family. She’s so worried about the meeting; she actually breaks down in tears in front of Jeremiah. Even though he’s been her rock through all of this she decides to make the visit on her own. Sabrina thought it would be all shaking hands when it turns out she comes from a hugging family.

Sabrina is happy because she feels her family automatically got her. For instance, Sabrina now knows she gets her reserve from her family who are known for it. It wasn’t her upbringing like she thought.

Mary is happy for her daughter once she saw the changes. She knows this was what Katie-Ann wanted. Abe and Rebecca on the other hand immediately become critical after seeing the transformation. Kate does her best to stand up for Katie-Ann but Abe and Rebecca are mad that they weren’t with Katie-Ann for her make-over. Abe is mad because he feels that Kate shut them out on purpose. Mary stills thanks Kate for helping Katie-Ann. She didn’t want her daughter to look like Rebecca.

Kate, Rebecca, and Abe leave. Abe is mad again. He feels like Kate was bad mouthing his wife to his mom. Kate tries to explain it was their own fault his mom was upset but they refuse to hear her.

Next week, Rebecca is getting fed up with Abe’s family while over Puerto Rico Sabrina doesn’t want to abandon her new family. Were they better off back when no one’s family was in the picture?